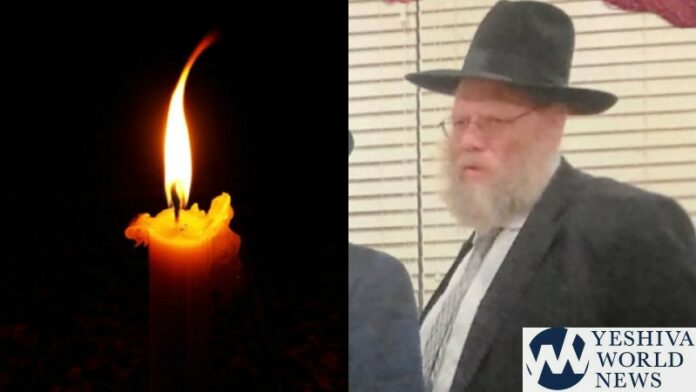 HaRav Zev Rothschild Z”L known to most people as “Zeev”, was ripped from us so suddenly, not just in middle of a chapter, but in middle of enough chapters to fill up book fulls of stories. To even attempt to describe his life in a short article, is simply not possible.

In life displayed to the typical person, he hid behind the title of being the owner of NPGS supermarkets in Lakewood. A man who rose to vasikin each morning to Daven without fail, after ending his busy chessed meetings schedule usually at 2-3 o’clock in the morning. After Davening, he prided himself in learning half the day, after which he would arrive in his office, only to be greeted in his waiting room on the way in, by countless amounts of people already waiting on line for an appointment to meet with R’ Zeev.

He used his brilliant head and very soft spoken personality so assist countless amounts of people in business decisions, disagreements, marriage issues, issues with the law, financial issues and anything else you could possibly think of. He was a master negotiator, and assisted countless amounts of people in reaching settlement, that both sides were very content with. There was no such thing as, “sorry I just don’t have the time”. He would take impossible challenges and figure out answers, and make it happen some way or other.

A typical example, was when his own store, the NPGS on Main St burned down to the ground one night many years ago, not too long before Pesach, and at that time there weren’t any other full size supermarkets in town. People in Lakewood panicked, besides for Zeev. He was on the phone that morning placing orders for a huge tent, generators, refrigeration, and freezers. He had a full stocked supermarket with plenty of time to spare for the Lakewood oylam to be able to shop at discount prices.

He was a man that spoke very little, and accomplished an unthinkable amount. He had very strong sheetas in Kashrus, and therefore employed a full time Mashgiach on staff to do their own investigation into every product that came into the store. He would not allow many items to be sold that he felt weren’t up to par. He tried very hard to maintain the old fashion style of shopping, and not turning food shopping into an experience.

Last week as the magefa made its rounds, he attempted to change the hours in the store to accommodate many people who are higher risk, and should be able to come shop with very small amounts of people in the store. He made to sure to be very thoughtful of all, besides of himself, and he unfortunately contracted the devastating virus.

As his health deteriorated, he checked into the hospital on Motzoi Shabbos. He continued to deteriorate, until being niftar this morning on his 63rd birthday, Zayin Nissan.

RABBI AARON KOTLER SUBMITTED THE FOLLOWING TO YWN ABOUT THE NIFTAR:

The patron of difficult and lost causes. When there was a Machlokes that was unsolvable – we called R’ Zeev. A family fighting in a divorce with no resolution in sight – we called R’ Zeev. You would never see his name in print, but if you needed help you knew who to go to – R’ Zeev.

Our hearts are too broken to articulate the loss of this Tzaddik, who lived for the Klal and for the Yachid and never for himself.

I think of his office, somewhat messy, with a million things going on, and of R’ Zeev there with total aplomb, dealing with everything in its proper time and place. I think of a man who never said no. And of a man who if you presented the most intractable problem to him would respond as if it were the smallest matter – his brain would immediately begin to churn with ideas and action plans on how to solve it.

How much money did he save our Tzibbur with NPGS? How many families did he save from ruin? How many Almanos and Yesomim did he ensure had their needs met? How many poor families had bread on their table because of him? What makes a group of people a true Kehilla and not just a conglomeration of individuals? R’ Zeev was that answer for us all – he made us into the beautiful Kehilla that we are, by ensuring that no need was neglected and no individual isolated.

Now, in the aftermath of Coronavirus we are going to have to rebuild our lives, and first and foremost will be for each of us to step up to the plate a bit more to fill the gap left by his tragic petira.