Rabbi Meir Schuster of the Heritage Foundation and for being the Man of the Wall was niftar today, 17 Adar I 5774. The levaya began at 16:15 at Shamgar Funeral Home in Yerushalayim. Kvura will be in Har HaZeisim.

For those who are unfamiliar with the niftar, you are advised to visit the website to learn about the life of this remarkable individual, whose devotion to HKBH and the Jewish People reached countless lives.

It was the early 1980’s and Rabbi Meir Schuster had already become a permanent fixture at the Kosel. Although he had met thousands of young Jews and become the catalyst for their introduction to Judaism, something was still bothering him. Simply put, there was no place “Jewish” for these kids to stay in the Old City. There were youth hostels in the Christian Quarter and in the Muslim Quarter that were regularly filled with Jewish students, but there was no place Jewish for them to find a budget- oriented and sociable place to spend the night. And so, Rabbi Schuster launched his second groundbreaking venture—Heritage House.

In 1985, the Heritage House youth hostel in the Jewish Quarter opened its doors for the first time. The men’s and women’s youth hostels are housed in renovated Crusader Period buildings located a short walk from the Kotel. In keeping with his vision, Heritage House not only provided clean, comfortable and free accommodations, but the dedicated and talented staff created a pleasant, low key atmosphere where students could ask questions about Judaism and discuss the meaning of their heritage and identity. To date, over 60,000 young Jews from around the world have been hosted by Heritage House, and today Heritage House annually provides thousands of visitors with a unique place to stay; and, if they choose, to also experience classes in introductory Judaism – as well as special Shabbos and holiday programming – all in the heart of the Jewish world that is the Old City of Jerusalem. 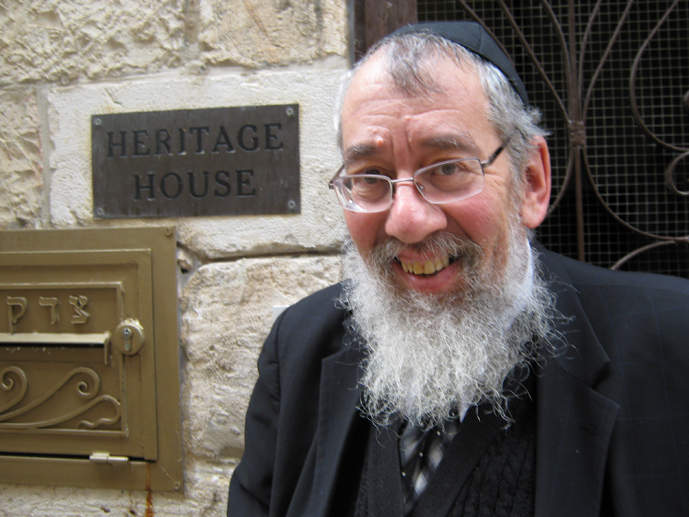 Like Reb Meir himself, Heritage House has become a Jerusalem landmark. Indeed, just as it is hard to imagine the Kosel without Reb Meir, it is difficult to imagine the Rova (Jewish Quarter) without Heritage House. It is because of this great man and the great institution he founded, that literally thousands of Jews have found their way home; home not just to Israel and Jerusalem, but home to the Jewish people, to Jewish destiny, and to the timeless depth of their own Jewish souls.

Meir Tzvi Schuster was born on January 22, 1943 to Morris and Mary, in Milwaukee, Wisconsin. Typical of the Jewish experience at the time, young Meir attended public school. At the age of eleven, his parents enrolled him in Rabbi Dr. Abraham J. Twerski’s afternoon Hebrew School. Rabbi Twerski took a personal interest in helping Meir catch up to the other students and the two formed a close bond. After two years, in 1958, Meir went to study at the Yeshiva in Skokie, Illinois – Bais Medrash L’Torah. Two years later, he transferred to the Ner Israel Rabbinical College in Baltimore, Maryland where Rabbi Schuster stood out as someone who was passionately devoted to Torah study, to prayer and to mitzvah observance.

Each morning, Reb Meir would wake his fellow students in the dorm, calling out, “Wake up. Wake up. It’s time to serve Hashem!” He was also a talented artist, and together with his friend Chaim Kass, who was a sofer, he created a number of beautiful ketubos. On Shabbos, Reb Meir spent the entire day studying in the bais medrash with a box of dates or figs at his side. With the exception of prayer and Torah discussions, he did not speak—the holy Shabbos was reserved exclusively for spirituality. Rabbi Shlomo Porter, the founder of Etz Chaim in Baltimore, still remembers the intensity with which Reb Meir would recite the Birkas Hamazon after eating. Indeed, anyone who has ever seen Rabbi Schuster daven at the Kotel, or anywhere else, can’t help but see that he is engaged in an intense, personal encounter with his Creator.

Rabbi Schuster and his Rebitzen, the former Esther Garfinkle of Monticello, New York, were married in 1967, six months after the Six Day War. Three months later, in March 1968, they came to Israel, for a year of Torah study in the Mir Yeshiva. As if to foreshadow the kind of impact the Schusters would eventually have on so many young Jews, they decided to extend their stay—for four decades! The Schusters settled in the Ezras Torah neighborhood of Jerusalem and had four children.

Not long after moving to Israel, Rabbi Schuster and his old friend Chaim Kass were at the Kotel where they a saw a young man wearing a backpack who was obviously deeply touched by his encounter with the Wall. Reb Chaim went over to the young man and asked if he would be interested in learning about Judaism, and the young man responded that he was. Unbeknownst to anyone at the moment, that young man who had been moved to tears at the Kotel, represented the beginning of a revolution. For the next two weeks, Reb Meir and Reb Chaim kept returning to the Kotel to try to interest more people in exploring Judaism. By nature, Rabbi Schuster is particularly quiet and reserved, an introvert not naturally given to conversation, and so Reb Chaim initially did the talking. Within a couple of weeks, however, Rabbi Schuster began to take the lead, and he never, ever looked back.

Rabbi Schuster, in his unassuming yet confident way, would walk up to people and begin by engaging them with the simplest of questions; “Are you Jewish?” “Do you know what time it is?” These questions became doorways to conversations that eventually led to other questions; “Have you ever experienced a Shabbos meal?” “Would you like to meet a wise man?” And so Rabbi Schuster would meet people—first dozens, then hundreds and eventually thousands—and he would arrange for them to be hosted for a Shabbos meal, or to take their first taste of Judaism at Aish HaTorah, Ohr Somayach, N’vei Yerushalayim, Dvar Yerushalayim, the Diaspora Yeshiva or wherever he felt was the appropriate place for that particular young man or woman. For forty years, day in and day out—day after day and night after night—Rabbi Meir Schuster was a fixture at the Kotel.

In time, Friday night and Shabbos at the Kotel became synonymous with Rabbi Meir Schuster. (He was later joined by Jeff Seidel.) All week long, Rabbi Schuster would meet people, and if he couldn’t interest them in studying, he would urge them to meet him back at the Kotel on Friday night so that he could arrange for them to have a Shabbos dinner at someone’s home. And so, every Friday night at the Kotel, after the prayer services were concluded, Rabbi Schuster would round up a handful of people, or a dozen – sometimes, several dozen – and escort them thru the streets of Jerusalem to families who were awaiting their special guests.

As the years passed, it wasn’t uncommon to see Rabbi Schuster, his son Duvi, and a volunteer or two surrounded by twenty, thirty, forty people waiting to experience Shabbos. Indeed, long before the Internet, almost any young person who was traveling to Israel eventually heard through the grapevine that if they wanted a Shabbos meal in Jerusalem, all they had to do was hang out at the Kotel and Rabbi Schuster would find them.

In 1985, Rabbi Schuster founded the Heritage House youth hostel in the Jewish Quarter of the Old City of Jerusalem. This was in response to his great pain at meeting young people staying in youth hostels in the Christian and Moslem Quarters of the Old City. He was a tireless visionary who raised all the necessary funds and hired a dedicated and talented staff to transform this new dream into a vibrant reality. Over the years, Heritage House has provided tens of thousands of visitors with a unique place to stay, and if they choose, to also experience the introduction to Judaism classes, or Shabbos and holiday programs that are available through the Heritage House. Like Rabbi Schuster himself, Heritage House became a Jerusalem landmark.

But then came the Intifada of 2000. The wave of terror attacks almost dried up the number of tourists who were visiting the Kotel. Instead of using this slow period for some much needed rest and relaxation, Rabbi Schuster launched a new, ambitious venture—Shorashim Heritage Centers, for young secular Israelis to learn about their Heritage. The first center was opened in the heart of Jerusalem’s downtown district, with subsequent centers in Herzliya, Haifa, Modiin and Pardes Chana. Rabbi Schuster again shouldered the burden of raising all the funds and assembled a team of dynamic educators who speak the language of Israeli youth. Within ten years after opening the first center, over 50,000 young people had their first taste of Jewish wisdom and spirituality in a warm, open, non-threatening atmosphere. To date, through Shorashim, over 300 couples have met, married and begun to build vibrant Jewish families.