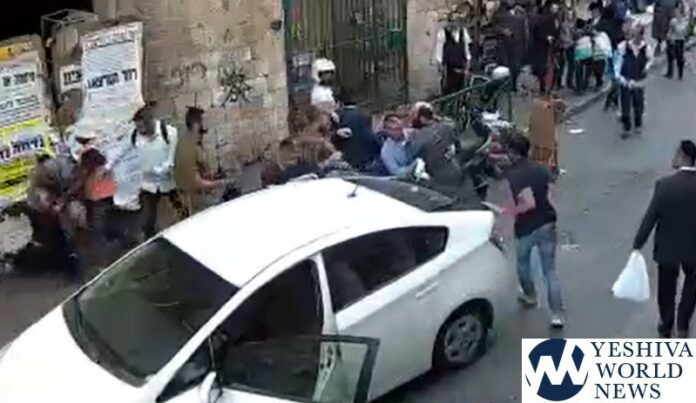 A Chareidi man who was beaten by a police officer after asking him why he was hitting a Chareidi minor, was awarded 15,000 NIS in reparations from the police by a Jerusalem court. The court recommended that the police settle a lawsuit that was being filed against them as a result of the man being beaten by the officer in an incident that occurred in May 2017.

The incident unraveled after an officer hit a Chareidi minor who was protesting in Meah Shearim. An Avreich, the plaintiff, approached the officer and protested the officer’s actions demanding to know why the officer was hitting the minor. The officer then proceeded to grab the Avreich’s beard and hit him. The Avreich filed a lawsuit against the police via Attorney Itamar Ben Gvir and in the lawsuit, described how other officers proceeded to jump him, choke him, forcibly lie him down on the ground, and punch him. One officer then approached him while he was lying on the ground and spit at him and then pulled his beard. The officer then walked off as if nothing had happened. He was then arrested and forcibly marched through Meah Shearim Street after his Yarmulka fell off. The man asked the officers numerous times to stop and let him retrieve his Yarmulka and the officers ignored his pleas.

Following the lawsuit and the complaint, the court recommended to the defense attorneys representing the police that the issue be settled out of court and the plaintiff granted 15,000 NIS.

Attorney Ben Gvir commented on the results of the case: “With the charge of 15,000 NIS, there is a message being sent to the police, to stop the violence against the Charedi public.”