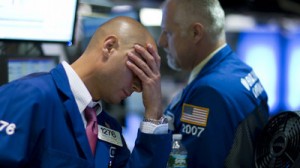 Stocks came off their worst levels, but still finished sharply lower Thursday in heavy-volume trading as a gloomy outlook from the Federal Reserve in addition to ongoing economic jitters fueled concerns of a recession.

The Dow logged its biggest decline in a year.

The Dow Jones Industrial Average finished sharply lower, but still finished above its August closing low of 10,719.94. The blue-chip index skid 528 points in its intraday low.

The blue-chip index is on track for its worst week in almost three years.

The S&P 500 tumbled to trade near a key technical support level of 1,120. The Nasdaq also declined sharply. The CBOE Volatility Index, widely considered the best gauge of fear in the market, soared above 42.

All 10 S&P sectors finished firmly in the negative territory, led by materials and energy.