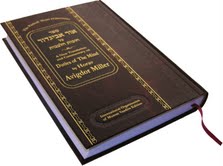 Shaar Habechina—the second chapter of Chovos Halevavos—was the foundation of his distinctive approach to discovering Hashem everywhere in life, in the Torah, and in the world.

When once asked how he became “Rabbi Miller,” he replied that not a day has passed since learning in Slobodka that he didn’t spend time learning Chovos Halevavos.

“This new sefer is a gateway to happiness,” said Rabbi Yehuda Brog, director of Yeshiva Gedolah Bais Yisroel, who oversaw publication of the sefer.

“Rabbi Miller has not only rendered this classic mussar sefer in clear simple English, but he has enhanced it with an entirely new sefer that is uniquely his own: the commentary that we call Ohr Avigdor. It’s almost impossible to read this and not feel a tremendous simcha from all the chesed we receive from Hashem.”

The Ohr Avigdor Parkoff Shaar Habechinah has been published thanks to the generous sponsorship of Richard and Debra Parkoff of Lawrence, NY, prominent members of their community and dedicated supporters of numerous Torah causes. Mr. Parkoff was an enthusiastic supporter of the Shaar Habechinah project from its inception and eagerly helped bring the sefer to fruition.

“Rabbi Miller had a unique ability to speak to everybody,” Mr. Parkoff commented, “and his commentary on Duties of the Mind is also unique. This sefer will inspire countless people by opening their eyes to the world of kindness Hashem has created for them.”

Rabbi Miller’s commentary makes the lessons of Shaar Habechinah so vivid that Rabbi Leib Kelemen (International Organization of Mussar Vaadim) raved, “Few sfarim have the potential to inspire such a feeling of simcha as the Chovos Halevavos can. For the first time, [our] students were experiencing the study of mussar with a fiery enthusiasm.”

The sefer was adapted by Yitzchak Kirzner from Rabbi Miller’s nearly 90 audio shiurim on the sefer. It features the original Hebrew text together with Rabbi Miller’s Ohr Avigdor commentary. It is further enhanced with forty practical “Growth With Action” exercises that challenge the reader to implement the sefer’s lessons immediately.

The Ohr Avigdor series is published by the Rabbi Avigdor Miller Simchas Hachaim Foundation, a project of Yeshiva Gedolah Bais Yisroel—which Rabbi Miller founded together with his son, Rabbi Shmuel Miller—and authorized to disseminate his work. Ohr Avigdor Shaar Habechinah is available exclusively through the Simchas Hachaim Foundation: 718-258-7400 or [email protected]. The sefer can also be purchased online at www.bit.ly/avigdor.