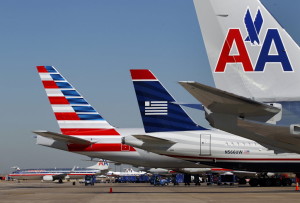 American Airlines has emerged from bankruptcy protection and US Airways culminated its long pursuit of a merger partner after the two completed their deal Monday to create the world’s biggest airline.

The merger survived a challenge from the government and criticism from consumer groups, who fear it will lead to higher prices. It’s the latest in a series of mergers that will leave four airlines controlling more than 80 percent of the U.S. air-travel market and with more power than ever to limit seats and boost profits.

American emerges from bankruptcy as American Airlines Group Inc. It will mark a monumental victory for CEO Doug Parker and his executive team at smaller US Airways, who convinced American’s creditors that a merger made more sense than letting American remain an independent company.

Plans call for Parker to mark the day by ringing the opening bell on the Nasdaq Stock Market, where the new company will debut under the ticker symbol AAL. Parker’s team will spend the next two years or longer combining the two carriers.

The American Airlines name will live on, while US Airways will join Continental, Northwest and other airlines that now exist only in the memories of employees and longtime travelers.

September 17, 2020 4:41 pm
3
The Orange County Health Department visited the main Satmar Shul in Kiryas Joel on Wednesday morning and platstered a "cease and desist order" on...