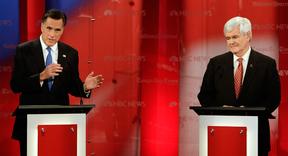 A two-man fight for Florida is emerging ahead of the state’s final Republican presidential debate Thursday, with polls showing the race neck and neck as Mitt Romney and Newt Gingrich pound each other over personal and professional vulnerabilities.

A new Rasmussen poll out Thursday has Romney retaking the lead with 39 percent over 31 percent for Gingrich. Rick Santorum had 12 percent and Ron Paul was taking 9 percent of the vote among the 750 likely GOP voters polled.

A Time magazine/CNN poll out Wednesday had the race in a virtual tie between Romney and Gingrich, 36-34 percent among 369 registered Republicans who are likely to vote in the Florida presidential primary. The survey was taken between Jan. 22-24. Rick Santorum had 11 percent and Ron Paul was taking 9 percent of the vote.

The latter two candidates are far back in Florida, in part because they have been concentrating on other states.

According to the latest American Research Group poll of 600 likely GOP primary voters, Romney leads his rivals with 41 percent followed by Gingrich with 34 percent, Santorum with 9 percent and Paul with 7 percent.

With the race tight, Romney’s campaign may be benefiting from a decision to concentrate on early voting. The ARG poll found 17 percent of likely primary voters said they had already voted absentee or early. Among this group, Romney was leading Gingrich 51-39 percent. For those who haven’t voted yet, the race was 39-33 percent Romney to Gingrich.

The Florida Republican Party told Fox News that as of Thursday morning, 501,316 absentees ballots had been requested and 254,485 had been returned. Florida, which allows early voting, has also had 151,678 early votes in the polls so far. Early voting ends Saturday.

A new poll on Thursday shows the former Massachusetts governor is also in a better place to challenge President Obama. According to a Quinnipiac University poll of Florida voters on Thursday, Romney runs even with Obama 45 – 45 percent in Florida while Gingrich is 11 points back from the president, 50 – 39 percent.

In the poll of 1,518 registered voters in Florida, independents support Romney against Obama almost evenly, but they break for Obama over Gingrich by a substantial 50-33 margin.

The winner of Tuesday’s primary will score something no one has yet claimed in a tumultuous primary season: a second victory. The first three nominating contest have gone to three different candidates; only Paul has not topped a primary or caucus vote but he has been accumulating delegates for what he calls his “cause.”