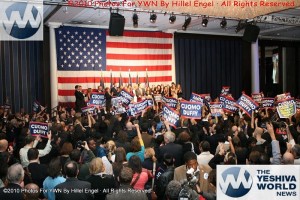 9:00PM EST: Andrew M. Cuomo, whose career in government appeared all but over just eight years ago, was elected the 56th governor of New York on Tuesday, a stunning comeback for the scion of one of the state’s legendary political families.

The state’s sitting senators, Kirsten E. Gillibrand and Charles E. Schumer, easily won re-election. Results had not yet been reported in the contests for attorney general and state comptroller.

YWN PHOTO ALBUM: Click HERE for photos taken by Hillel Engel at the celebration party at the Sheraton Hotel in Manhattan.