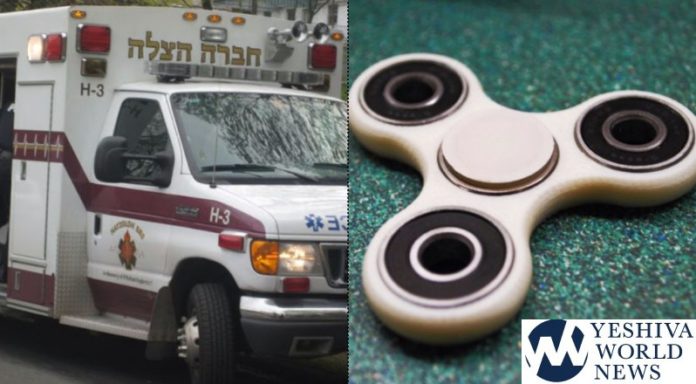 Monsey Hatzolah was dispatched to a call on Monday morning (AUDIO IN EXTENDED ARTICLE) for a child who had a “fidget spinner” stuck on his finger.

The toy was safely removed by Hatzoah Volunteers from the child’s finger without incident.

But what IS a “Fidget Spinner”, and why can’t kids put it down?

If you’ve been near a group of elementary school-aged kids recently, and in some cases even high-schoolers, chances are you’ve seen a certain toy whirring between their fingers. It’s not much of a gadget, just a spinning device with two or three prongs, but young people can’t get enough of them. And teachers can’t seem to confiscate them fast enough.

In terms of toys, 2017 is being defined as the year of the Fidget Spinner. As the name suggests, the toy is geared for restless types – that is, the kid in us with energy to burn and not the longest attention span – in that it creates a kind of hypnotic effect. Some use the Fidget Spinner to produce a few tricks, like flicking it from hand to hand or knocking it around like a Hacky Sack.

But for most, just watching a Fidget Spinner whirl like a small fan stuck on full blast is satisfaction enough. The effect is said to provide relief and focus for those who grapple with attention disorder issues.