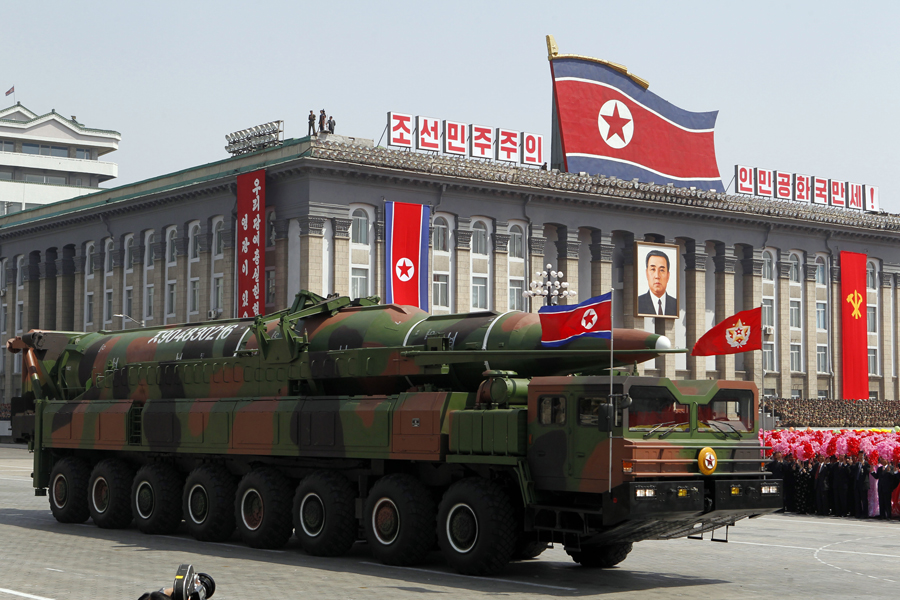 North Korea’s latest missile test Monday may have less to do with perfecting its weapons technology than with showing U.S. and South Korean forces in the region that it can strike them at will.

South Korean and Japanese officials said the suspected Scud-type short-range missile flew about 450 kilometers (280 miles) on Monday morning before landing in Japan’s maritime economic zone, setting off the usual round of condemnation from Washington and the North’s neighbors.

It’s the latest in a string of test launches by North Korea as it seeks to build nuclear-tipped intercontinental ballistic missiles that can reach the U.S. mainland, a drive that puts North Korea high on the list of foreign policy worries for Japan, Washington and Seoul.

This sets up the possibility that North Korea hopes to use the test to show it can hit U.S. targets near and far and emphasize its defiance of U.S.-led pressure on its missile and nuclear programs, which has included vague threats from President Donald Trump and the arrival in Korean waters of powerful U.S. military hardware. Scuds are capable of striking U.S. troops in South Korea, for instance, and the two newly developed missiles tested earlier this month have potential ranges that include Japan, Guam and even, according to some South Korean analysts, Alaska.

The missile was launched from the coastal town of Wonsan, the South’s Joint Chiefs of Staff said in a statement. It landed in Japan’s exclusive maritime economic zone, which is set about 200 nautical miles off the Japanese coast, Japanese Chief Cabinet Secretary Yoshihide Suga said. He said there was no report of damage to planes or vessels in the area.

North Korea is still thought to be several years from its goal of being able to target U.S. mainland cities with nuclear ICBMs.

South Korea says North Korea has conducted nine ballistic missile tests this year, including one in which four missiles were launched on the same day.

North Korea’s state-controlled media had no immediate comment on Monday’s test, but released a statement, without mentioning the launch, that accused Seoul and Washington of “aggravating the situation” on the Korean Peninsula by conducting joint military drills and other “reckless acts.”

The official Korean Central News Agency cited Kim as ordering officials to mass-produce and deploy the system all over the country so as to “completely spoil the enemy’s wild dream to command the air.”

Trump has alternated between bellicosity and flattery in his public statements about North Korea, but his administration is still working to solidify a policy on handling the North’s nuclear ambitions.

Monday’s launch was North’s Korea’s third ballistic missile launch since South Korean President Moon Jae-in was inaugurated on May 10. He has signaled an interest in expanding civilian exchanges with North Korea, but it’s unclear if he’ll be able to push anytime soon for major rapprochement while the North continues to make serious advances in its nuclear and missile programs.

Suga, the Japanese Cabinet secretary, said the missile fell about 300 kilometers (190 miles) north of the Oki islands in southwestern Japan and 500 kilometers (310 miles) west of Sado island in central Japan.

Besides its regular ballistic missile test-launches, North Korea carried out two of its five nuclear tests last year — in January and September. Outside analysts believe North Korea may be able to arm some of its shorter-range missiles with nuclear warheads, though the exact state of its secretive weapons program is unknown.