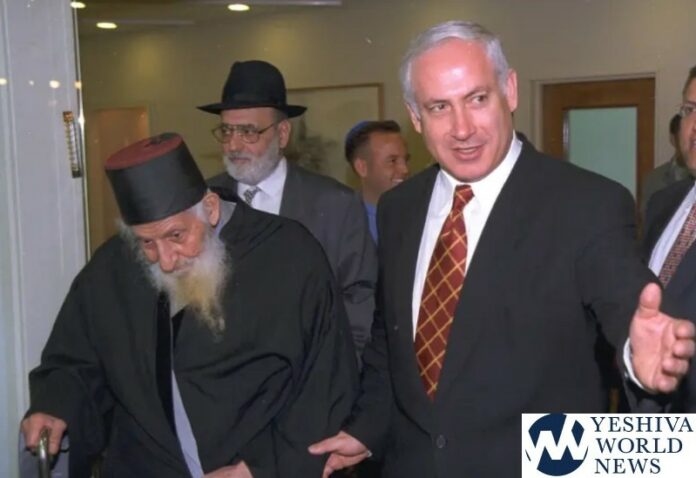 A report in Israel’s daily Yisrael Hayom this week addressed a report that’s been spread recently on Whatsapp groups and social media that Rav Yitzchak Kaduri, z’tl, predicted the current situation of the deadlock between Likud and Blue and White and the fights between the right and left.

The message on social media says that ” a sefer named “U’Shevuato L’Yishchak,” which R’ Yitzchak Kaduri, z’tl wrote in his youth was recently found in in the yeshiva of mekubalim, Nachlas Yitzchak. A prediction was found in the sefer saying: “On the eve of the year 5780, the year of tikkunim, there won’t be a government in Israel for an extended period of time. The camps will quarrel greatly with each other without reaching any decision. And then, on the day of Rosh Hashana, the sitra achra will fight with the sitra d’kedusha in Shamayim, and Hakodash Baruch Hu and His legions will decide between them. This is all I can reveal, and from herein on I swore not to reveal more secrets.”

The report adds that: “In the ancient sefer ‘The Bris of the Persimmon’ written by the mekubal R’ Sasson Chai Shoshani who was called the ‘the Navi from Mitzrayim,’ there’s a wonderful quote which has special meaning during these days: ‘The day will come that two ministers will win the government in Israel. The name of both will be Binyamin and neither will succeed in establishing a government. On that day, you should know and understand that Moshiach is already standing by the door and on the Shabbos afterward, he will come and reveal himself.'”

Yisrael Hayom spoke to Moshe N., who is the assistant of Rav Yosef Kaduri, R’ Yitzchak’s Kaduri’s grandson and the Rosh Yeshivah of Nachlas Yitzchak. “In the yeshivah, there’s all types of handwritten documents from Rav Kaduri with holy names and similar things that we keep in the safe,” Moshe said. “These are things that are passed down from generation to generation, secretly – only between the mekubalim – and it’s forbidden to reveal them.”

“In writings based on the kaballah of R’ Sasson Chai Shoshani, R’ Kaduri speaks about the geulah and that before Moshiach comes they won’t be able to form a government. So what was publicized [on social media] is very close to what’s written in the documents, but the wording of the published report is not exact. The chavrusa of R’ Kaduri, Chacham Menachem Menashe, the author of Ahavas Chaim, wrote similar things. He wrote in the name of R’ Sasson Chai Shoshani in Parshas Ki Savo, the parsha we read this past Shabbos, on what will be at the end of days, how there will be a war with the erev rav about Shabbos and how the erev rav will have the majority.”

“The documents of Rav Kaduri say something similar but it’s written in a more detailed way and it speaks specifically about this year as a year that can turn into a year of geulah. It doesn’t say “elections” – that’s an interpretation – but it writes about the fight between two different sides in Am Yisrael, that this is a stop on the way to geulah and one of its signs. Ultimately, the geulah is dependent only on us, Am Yisrael.”