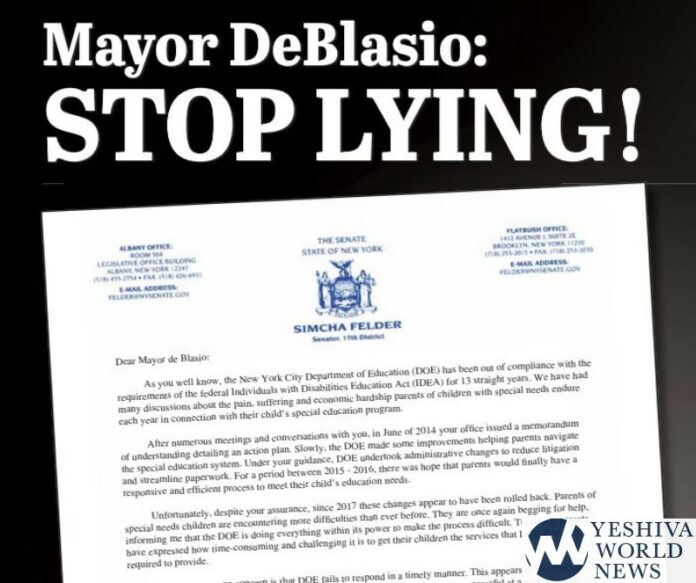 Senator Felder is calling on Mayor de Blasio to keep his promise to parents of special needs children.

“In 2014, the Mayor held a press conference where he laid out his commitment to ‘reduce litigation, streamline paperwork, and ensure parents have a responsive and efficient process to meet their child’s special education needs,’ “these are the Mayor’s words and we are holding him to them,” Senator Felder told YWN.

“Today, the bureaucracy that parents endure is worse than ever. After hearing what they go through, year after year, I would describe it as cruel and unusual punishment. DOE has been out of compliance with the law for 13 years.

Think about that for a minute… Back then, families came to us for help right at the beginning of their ordeal, now their kids are out of school and the problem persists. It’s really appalling, but every day there are more calls from parents who need help right now, and I am determined to do right by them,” said Senator Felder.

THE FOLLOWING IS FELDERS LETTER TO MAYOR DEBLASIO

As you well know, the New York City Department of Education (DOE) has been out of compliance with the requirements of the federal Individuals with Disabilities Education Act (IDEA) for 13 straight years. We have had many discussions about the pain, suffering and economic hardship parents of children with special needs endure each year in connection with their child’s special education program.

After numerous meetings and conversations with you, in June of 2014 your office issued the attached memorandum of understanding detailing an action plan. Slowly, the DOE made some improvements helping parents navigate the special education system. Under your guidance, DOE undertook administrative changes to reduce litigation and streamline paperwork. For a period between 2015 – 2016, there was hope that parents would finally have a responsive and efficient process to meet their child’s education needs.

Unfortunately, despite your assurance, since 2017 these changes appear to have been rolled back. Parents of special needs children are encountering more difficulties than ever before. They are once again begging for help, informing me that the DOE is doing everything within its power to make the process difficult. Too many parents have expressed how time-consuming and challenging it is to get their children the services that DOE is legally required to provide.

The most common concern is that DOE fails to respond in a timely manner. This appears to be especially true in regard to payments that are due – or more likely overdue. Whether parents are successful at a hearing or agree to a settlement, DOE does not appear to processes payments to these families for many months or in some cases over a year. This situation persists despite the fact that DOE is legally required to disburse these funds within 30 days. These parents have enough stress without having to bear the tremendous financial burden of paying upfront for their child’s education, hoping DOE will eventually get around to reimbursing them. (See attached list of 73 cases dating back to school year 2017/18, of which only one student had received full reimbursement.)

Secondly, cases previously settled for years are now being called to DOE hearings, even though nothing has changed in the case or IEP. These children carry diagnoses of permanent, pervasive conditions. The emotional toll on parents cannot be overstated; the waste of valuable time and energy, already so overtaxed in families with a special needs child, is unconscionable.

After 13 years, children and families are still suffering humiliation and financial burden from a special education system that is more burdensome and bureaucratic than ever. Five years have passed since you issued a memo and held a press conference outlining your commitment to these families, and sadly it appears to have become mostly talk. It is past time DOE be brought in compliance with the law and ensure students with disabilities appropriate placements and timely reimbursements for their education.

Before the start of the 2019-20 school year, please take a stand. Fulfill your commitment to ease the burden on families of special needs children. Cut the red tape, speed up the process, and let’s finally reach outcomes that do right by these families.

Due to the pressing nature of these issues, I respectfully request an expedited response by August 19.