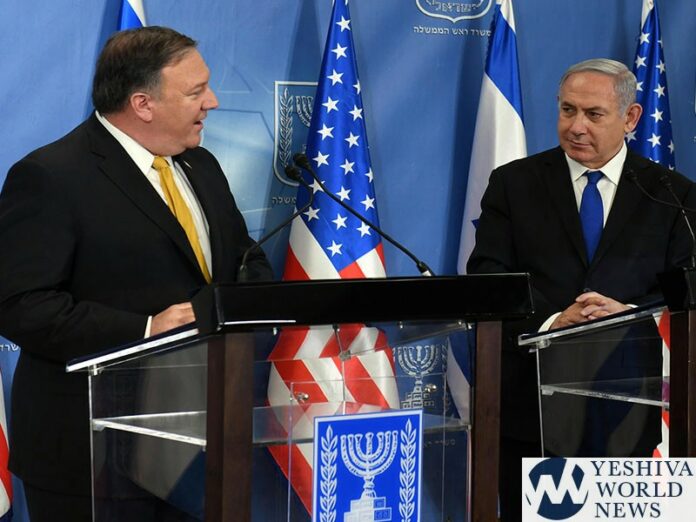 Secretary of State Mike Pompeo announced on Monday that the U.S. is reversing the Obama administration’s approach to settlements.

Pompeo’s announcement repudiates a 1978 State Department legal opinion that held that civilian settlements in the occupied territories are “inconsistent with international law.”

The Trump administration views the opinion, the basis for long-standing U.S. opposition to expanding the settlements, as a distraction and believes any legal questions about the issue should be addressed by Israeli courts.

He says US policy has been inconsistent for decades, noting various shifts in the last decades.

He blames John Kerry for ending a carefully thought-out stance on settlements by declaring them illegal.

The following statement was released by the office of PM Netanyahu:

Today, the United States adopted an important policy that rights a historical wrong when the Trump administration clearly rejected the false claim that Israeli settlements in Judea and Samaria are inherently illegal under international law.

This policy reflects an historical truth – that the Jewish people are not foreign colonialists in Judea and Samaria. In fact, we are called Jews because we are the people of Judea.

The Trump Administration policy is also correct in stating that those who have categorically denied any legal basis for the settlements not only deny truth, history and the reality on the ground, they also set back the cause of peace, which can only be achieved through direct negotiations between the parties.

Israel’s legal system, which has proven itself fully capable of addressing legal questions related to the settlements, is the appropriate place for these matters to be adjudicated – not biased international forums that pay no attention to history or facts.

Israel remains ready and willing to conduct peace negotiations with the Palestinians regarding all final status issues in an effort to achieve a durable peace but will continue to reject all arguments regarding the illegality of the settlements.

Israel is deeply grateful to President Trump, Secretary Pompeo and the entire US administration for their steadfast position supporting truth and justice, and calls upon all responsible countries who hope to advance peace to adopt a similar position.