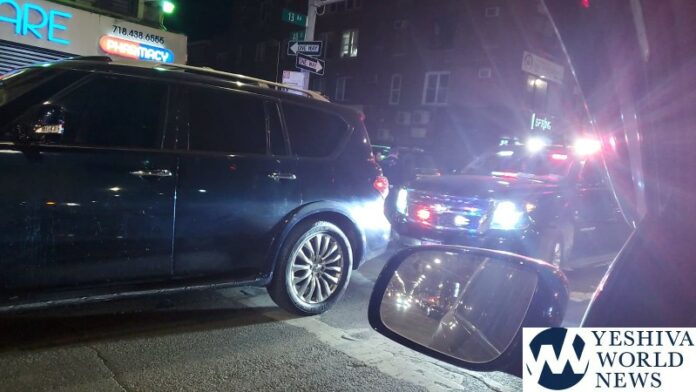 The anti-Semitic attacks in New York City just won’t stop. Since Chanukah began, YWN has reported three disturbing incidents, and now we have a fourth and fifth!

Boro Park Shomrim tell YWN that a Jewish man was attacked at around 1:00AM, Wednesday morning, on 13th Ave near 48th Street.

The victim stated he was walking down the street, when suddenly, he was approached by a man who punched him. It was a totally unprovoked attack, and no words were exchanged prior to the attack. The suspect then walked a few feet away to where his two friends were waiting and who were watching the attack. All three men then fled on foot.

The NYPD and Shomrim canvassed the area, but the suspects managed to get away,

The victim was treated by Hatzolah for minor injuries.

In yet a FIFTH Chanukah attack, two children were attacked in Williamsburg in front of 99 Wilson Street on Monday. Williamsbuerg Shomrim and the NYPD were on that scene. Thankfully, the two children were not seriously injured and did not require hospitalization.

On Monday a Jewish man was punched in the face in Manhattan, and on Tuesday there were two additional incidents where Jewish men were attacked in Crown Heights – in what appears to have been two separate hate crimes.

Meanwhile, NYC Councilman Chaim Deutsch tells YWN that a video has just surfaced of an incident that was reported several weeks ago.

In the video below, watch how several Jewish children were chased through the streets of Flatbush, in the vicinity of Avenue N & East 5th Street.

Deutsch tells YWN that NYPD Hate Crimes Task Force has been notified & they are investigating.

As the world celebrates the holiday season, NYC Jews are beaten on the streets.

In the last few days, there have been four anti-Semitic incidents, including three violent assaults. One occurred in broad daylight.

Safety is our right, not a privilege.

Where is the outrage?

This video has just surfaced of an incident that was reported several weeks ago.

Another assault in Williamsburg on two children @NYCHA 99 Wilson St on Monday. That makes 5 Chanukah attacks against the Jewish community in 2 days, 4 in Brooklyn. This never ends. We ask again for an inter-agency task force against hate crimes, & to publicize consequences.(1/2)