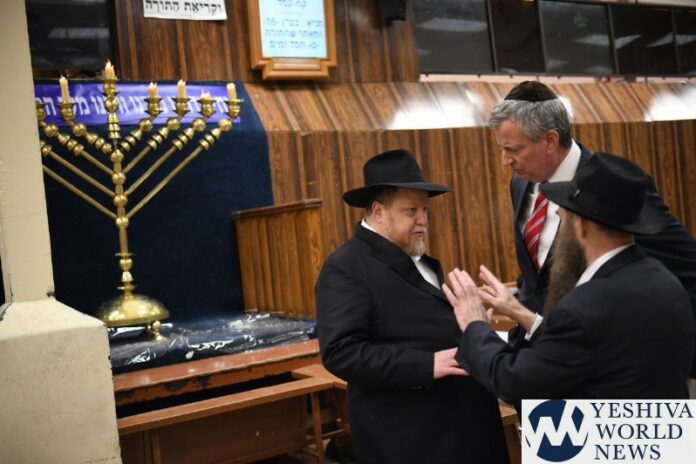 A woman accused of slapping three people in one of a series of apparently anti-Semitic attacks reported throughout New York during Hanukkah was charged Saturday with attempted assault as a hate crime, court records show.

Tiffany Harris, 30, was released without bail after her arraignment on the attempted assault charge and misdemeanor and lower-level charges , according to the records.

Her lawyer, Iris Ying, declined to comment, and the New York Post reported that Harris rebuffed questions as she left a Brooklyn court.

Police said Harris slapped three women, ages 22 to 31, in the face and head after encountering them on a corner in Brooklyn’s Crown Heights area. The victims suffered minor pain, police said.

Around the city, police have gotten at least six reports this week — and eight since Dec. 13 — of attacks possibly propelled by anti-Jewish bias.

The strength of the Chabad Lubavitch community is truly inspiring. Today brought a very real sense of worry and fear — but they close it as they close every Friday: united in faith and family. Their city stands with them tonight. pic.twitter.com/rWcfSUXN6C

Besides making officers more visible in Borough Park, Crown Heights and Williamsburg, police will boost visits to houses of worship and some other places, the mayor tweeted.

“I feel pained that in this society, a place that is supposed to be of respect for everybody, a season when we’re supposed to be respecting everybody, we see hate rearing its very ugly head. We will not accept it,” the Democrat said during a visit later Friday to Crown Heights, where he met with some representatives of the local Jewish community.

Around the city, police have gotten at least six reports this week — and eight since Dec. 13 — of attacks possibly propelled by anti-Jewish bias.

“It’s something that’s very alarming, and we treat it very seriously,” police Chief of Detectives Rodney Harrison said at a news conference Friday.

The attacks have happened as Jewish communities in the New York City metro area were already on edge after a deadly Dec. 10 shooting rampage at a northern New Jersey kosher market. New Jersey Attorney General Gurbir Grewal said the attack was driven by hatred of Jews and law enforcement.

Her arrest came hours after a hate crime assault arrest in Brooklyn’s Gravesend neighborhood. There, according to police and court documents, a woman was hit in the head with a bag by an attacker who jumped in front of her, made anti-Semitic comments and vowed that “your end is coming to you” Thursday afternoon. The victim, 34, was with her 3-year-old son.

The suspect, Ayana Logan, 42, was freed on supervised release after being arraigned Friday.

Her lawyer, Lauren Katzman, said she believed authorities were overreaching in casting the case as a hate crime.

“Ms. Logan is not guilty, and I look forward to fighting the case for her in court,” Katzman said.

On Monday, a Miami man was charged with hate-crime assault after police said he made an anti-Semitic remark and attacked a man in midtown Manhattan. The 65-year-old victim was punched and kicked, suffering cuts, police said.

He had been wearing a yarmulke, according to former state Assemblyman Dov Hikind, who has founded a group dedicated to combating anti-Semitism.

Steven Jorge, 28, is being held without bail, and a judge ordered a psychiatric exam for him, court records show. A message was left Friday for Jorge’s lawyer.

“It’s even more despicable that it occurred over the holidays,” the Democratic governor said in a statement Wednesday. Hanukkah began Sunday.

The New York Police Department’s Hate Crime Task Force is also investigating some other episodes this week as possibly motivated by anti-Semitism:

— Officers were told that two boys, ages 6 and 7, were accosted by a group of people while getting off an elevator in a Williamsburg apartment building Monday night, and one of the boys was hit, Harrison said. The attackers fled.

— A 25-year-old man told police he was walking on a Crown Heights street early Tuesday when a group of people started yelling anti-Semitic slurs at him and one threw a beverage at him. The suspects fled.

— Later Tuesday in Crown Heights, a 56-year-old man said that a group of people approached him, and that one of them punched him, while he was walking. No arrests have been made.