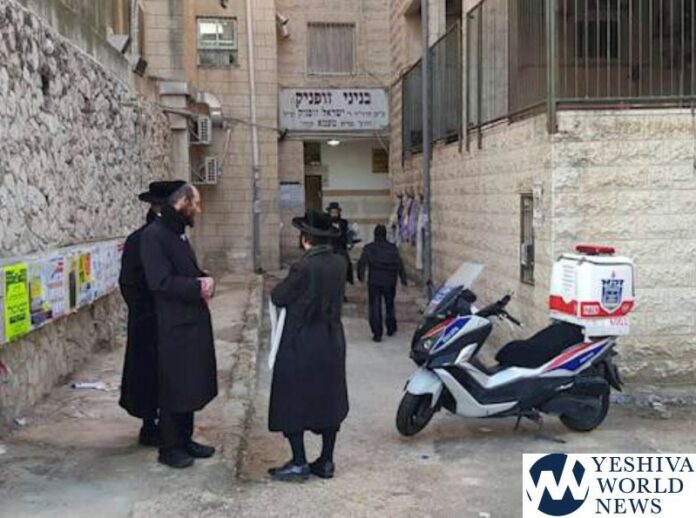 R’ Sari, z’l, a resident of Mevaseret Tzion was noheig to toivel in a mikvah and daven vasikin at the Kosel every morning. Every day, he left his home at 3 a.m., drove to the Zupnik mikvah and would then continue to the Kosel to daven at the vasikin minyan for Shacharis. He would then spend the rest of the day in Mea Shearim learning Torah with chavrusahs, B’Chadrei Chareidim reported.

R’ Sari’s friends in Mevasert Tzion described him as “a man of chessed, active in the community, a modest man who quietly did great things, a ba’al tzedaka – and he did everything anonymously. We can’t believe that we lost a man like this. There is no one who could fill his place.”

At 5:42 a.m., emergency services received a call about an unconscious man found in the shallow part of the mikvah.

MDA paramedics who arrived at the scene carried out resuscitation techniques but were unfortunately forced to declare his death.

“When we arrived at the scene, we saw a 73-year-old unconscious man, not breathing and without a pulse,” said MDA paramedic Yaakov Burachov. “They told us he was found like that in the shallow waters of the mikvah and they took him out of the water. We administered medical treatment and carried out prolonged resuscitation techniques but were ultimately forced to declare his death.”

Medical professionals believe that R’ Sari, z’l, probably suffered a heart attack while being toivel and drowned. By the time he was found by others, it was too late to save him.

Jerusalem ZAKA commander Benzi Oring arranged for an autospy to be waived and the body was taken by ZAKA volunteers to the Shamgar funeral home for burial.

The Zupnik mikvah is a large mikvah with 45 rooms in Geulah in the Beis Din complex of the Eida Hachareidis.