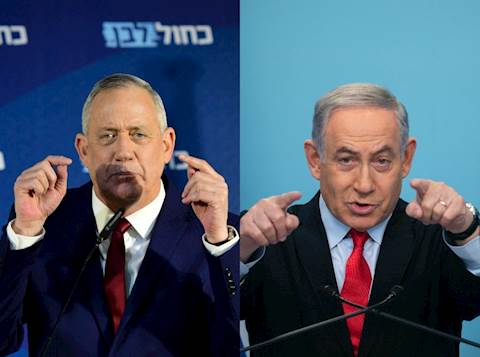 Negotiations between Likud and Blue and White toward a central unity government has been ongoing, with the negotiation teams meeting late Motzei Shabbos in a last-ditch effort to finalize coalition agreements before the Knesset adjourns for Pesach vacation.

However, party sources said that even if an agreement is reached before Pesach, there won’t be a government before Pesach due to the need for new laws to be advanced prior to the implementation of a unity government, including a bill to allow an MK under indictment – Netanyahu – to serve as deputy prime minister. The new bills will likely be appealed by interested parties to the Supreme Court and sources say that a government may not even be formed before Yom Haatzmaut on April 28.

Prime Minister Binyamin Netanyahu, who is currently in quarantine following Health Minister Yaakov Litzman’s diagnosis with the coronavirus, and Blue and White leader Benny Gantz “met” at the Prime Minister’s Residence in Jerusalem on Friday, with Bibi sitting inside the prime minister’s residence and Gantz sitting on the patio outside, with each shouting to make themselves heard.

One of the key issues of contention is the Justice Ministry, which is reportedly being given to Blue and White MK Avi Nissenkorn, a former General Secretary of the Histadrut labor union, with the Likud agreeing to it with the stipulation that Likud members maintain at least some veto power over the appointment of Supreme Court justices.

However, the Yamina party, which has made the reform of the Supreme Court and the justice system a major issue on its platform, is vehemently opposed to Nissenkorn’s appointment, with Yamina leader Naftali Bennett saying on Kan News on Sunday morning: “The prime minister has to decide what the government’s red lines are. It’s not so simple to appoint Nissinkorn as Justice Minister. His positions are the opposite of ours. I came to politics to advance my positions.”

Yamina has threatened to fight Netanyahu from the opposition if Netanyahu concedes everything important to the right-wing bloc to left-wing Blue and White MKs.

Another key issue of contention is the issues surrounding sovereignty over Judea and Samaria and the Jordan Valley and implementing US President Donal Trump’s “Deal of the Century.

Netanyahu reportedly views imposing sovereignty as part of the legacy he wants to leave before ending his term as prime minister and handing it over to Gantz in fall 2021.

Gantz opposes unilateral annexation of these areas, fearing that it will sour relations with Jordan, putting its peace treaty with Israel at risk. He also wants to delay taking any steps until the coronavirus crisis is completely over.  However, Gantz has reportedly agreed to accept a limited degree of annexation over Judea and Samaria in order to reach a coalition agreement as long as he can implement it in coordination with the Defense Ministry, which he is slated to head as Defense Minister for the first 18 months of the new unity government.

Labor chairman MK Amir Peretz formally requested to break up the merger of the Labor and Meretz party to lay the groundwork for him and MK Itzik Shmueli to join the unity government. Labor MK Merav Michaeli, who said she refuses to sit in a government under Netanyahu will be the only Labor MK to remain in the opposition, together with the Arab Joint List, Yisrael Beiteinu and Meretz.