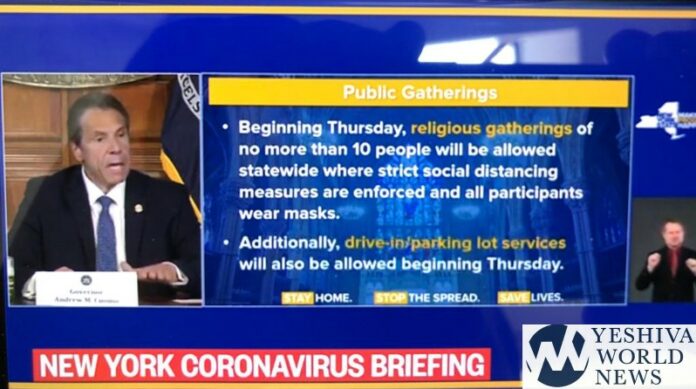 In response to the announcement, Agudath Israel of America released the following statement to YWN:

Today, Governor Cuomo announced that beginning Thursday, May 21st, religious gatherings of up to 10 people in a house of worship will be allowed, statewide, if strict social distancing measures are enforced and all participants wear masks.
This announcement follows meetings between Agudath Israel leaders with senior members of Governor Cuomo’s staff and Agudah’s recent statement calling on the governor to place high priority focus on the safe reopening of shuls, camps, and schools.
Two weeks ago, Agudath Israel disseminated guidelines for opening shuls after government gives its approval. We urge all to refer to that guidance – formulated by leading rabbonim and respected medical experts, and approved by the Moetzes Gedolei HaTorah. Caution and incremental steps are still advised, given the uncertain nature of this pandemic.
The governor also announced the formation of a council of faith leaders from across the state to advise him on reopening. Agudah’s executive vice president, Rabbi Chaim Dovid Zwiebel, has been appointed to that council. Further details will be forthcoming as additional guidelines are developed.
We thank the governor for his attention to Agudath Israel’s and others’ advocacy on this important issue. With Shavuos and Kabolas HaTorah soon arriving, we look forward to the day when our batei knessios and batei midrashim will once again be lively centers of Torah and tefillah.