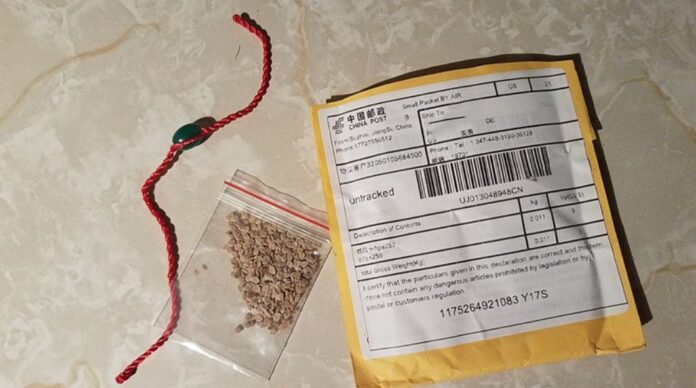 Officials in at least 28 states are urging residents to report any unsolicited packages of seeds that appear to have been sent from China because they could be harmful.

The agricultural departments in those states released statements in recent days saying residents had reported receiving packages of seeds in the mail that they had not ordered.

“Based on information provided by constituents, the packages were sent by mail and may have Chinese writing on them,” the Delaware Department of Agriculture said in a statement Monday. “All contained some sort of seed packet either alone, with jewelry, or another inexpensive item.”

The seeds are believed to be an invasive species that can harm plants and livestock.

People are being told not to open the packages and to not plant the seeds.

Some of the seeds have been mailed in white packages displaying Chinese lettering and the words “China Post.” Others, such as those mailed to people in Ohio, have been sent in yellow envelopes.

The U.S. Agriculture Department’s Animal and Plant Health Inspection Service is working with U.S. Customs and Border Protection and state departments of agriculture to investigate.

The USDA said in a statement it did not have any evidence that this was something other than a “brushing scam,” where people receive unsolicited items from a seller who then posts false customer reviews to boost sales.