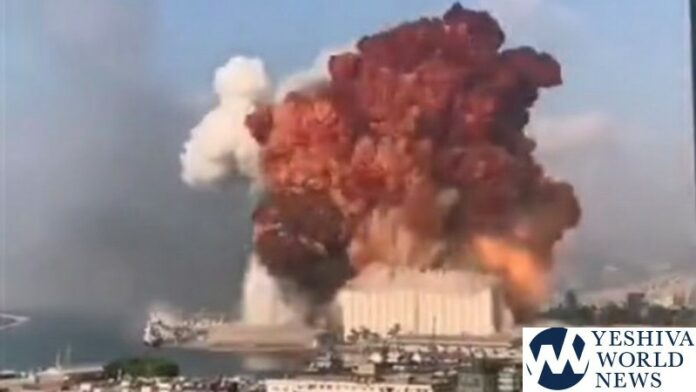 A massive explosion rocked downtown Beirut on Tuesday, flattening much of the port, damaging buildings and blowing out windows and doors as a giant mushroom cloud rose above the capital.

Lebanese Red Cross official Georges Kettaneh said there were dead and wounded, but did not have an exact figure, just saying there were hundreds of casualties.

A civil defense official on the scene of the blast said his men had evacuated dozens to hospitals and that there were still bodies inside the port, many of them under debris.

Under the joint directive of Defense Minister Benny Gantz and Foreign Minister Gabi Ashkenazi, Israel has approached the Lebanese government via international military and diplomatic channels and offered humanitarian and medical assistance.

The cause of the blast was not immediately known.

An Israeli government official as well a Lebanon officials confirm that Israel “had nothing to do” with the blast.

Under the guidance of the @Israel_MOD and @IsraelMFA, Israel has offered to send humanitarian & medical assistance to Lebanon via security and international channels.

This is the time to transcend conflict. pic.twitter.com/tUvGFTGBeR

We share the pain of the Lebanese people and sincerely reach out to offer our aid at this difficult time. https://t.co/E9xyZGMVnE