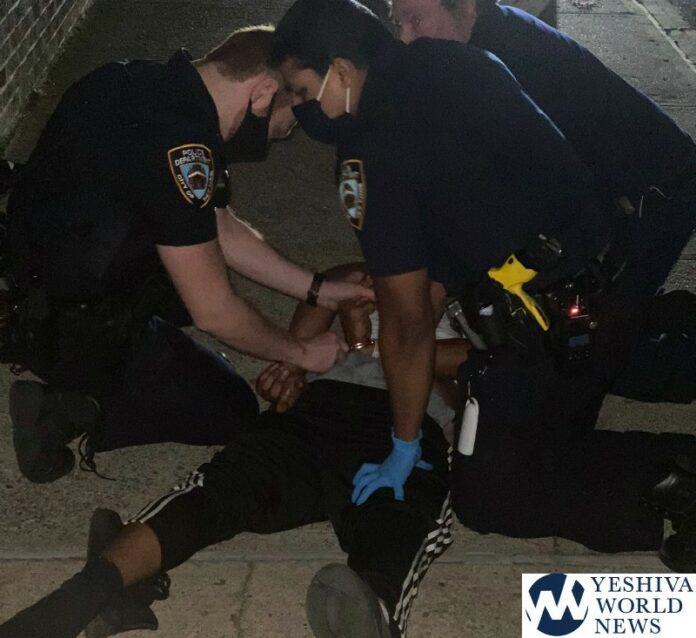 Thanks to a fast response by the NYPD and Flatbush Shomrim, a violent anti-Semite was arrested outside a Flatbush Shul on Monday night.

The incident unfolded at around 9:30PM, when an approximately 20-year-old black man allegedly walked up to a Shul on East 27th Street and Avenue S, and began shouting anti-Semitic slurs, and attempted to gain access to the premises. The suspect was immediately confronted by a Federal Agent (U.S. Customs / Border Patrol) who was Davening in the Shul, and was told to go away. The suspect responded by punching the security guard in the face. The suspect also assaulted another bystander, all while screaming anti-Semitic slurs.

Police and Shomrim were called who both responded in seconds – thanks to a massive deployment in the area.

Despite social media reports that police used a taser on the man, no such thing occurred. While trying to convince the man to calm down and be allowed to calmly be taken into custody, the man decided to run. After a 20 second foot pursuit, the suspect was taken into custody.

He was transported to the hospital for injuries that appear to have been from a prior unknown incident.

Police sources confirm to YWN that the suspect has since been charged with felony assault as a hate crime and resisting arrest. He has least 7 prior arrests including for assault, robbery, fraud and other crimes.

The victims were both transported to the hospital, thankfully, both are ok.

The Jewish community continues to be flooded by an overwhelming police response following a string of hate crimes. Additionally Flatbush Shomrim volunteers have stepped-up their patrols, and are out in force.

If you see anything suspicious, please call 911and Flatbush Shomrim immediately on their 24 hour emergency hotline at 718-338-9797.