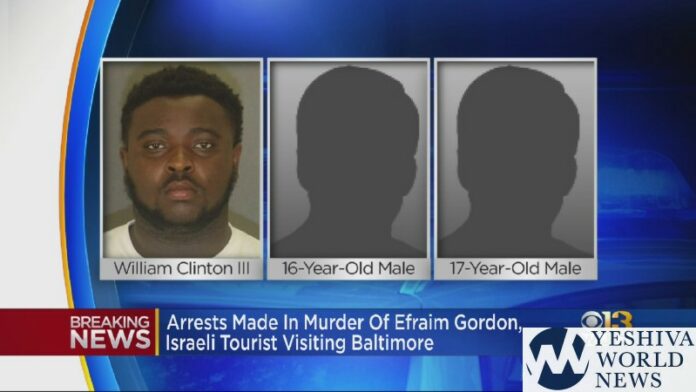 Baltimore police have charged three teenagers with first-degree murder, alleging that they were involved in the fatal shooting of 31-year-old Ephraim Gordon z’l in Northwest Baltimore last month.

William Clinton III, 18, and a 16-year-old and a 17-year-old are being held without bail, police said.

Efraim Gordon was fatally shot multiple times May 3 in what police said appeared to be a robbery. He was taken to a nearby hospital, where he died.

Gordon had traveled from Israel to Baltimore for a week’s visit to attend his cousin’s wedding. When he was shot in the Glen neighborhood, he was walking back to his aunt and uncle’s house, Councilman Isaac “Yitzy” Schleifer previously said.

Law enforcement and “the cooperation of the community … made these arrests possible,“ Schleifer wrote in a Facebook post after police announced the arrests.