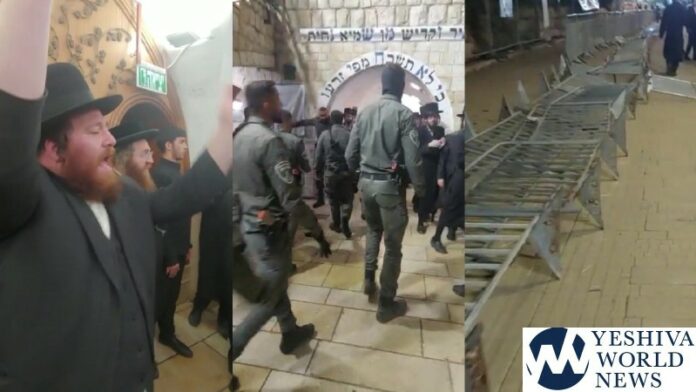 As Klal Yisroel is about to mark the first Yartzheit of the horrific tragedy at Meron, where 45 people lost their lives, violence broke out at the Kever the night before Lag Baomer.

It began as police announced in Yiddish and Hebrew that the entire Kever and mountain must be emptied, as only those with tickets will be allowed to enter starting tomorrow afternoon.

Around 200 extremists refused to leave the Kever, while others began knocking down all the police barricades set up for the event.

After the disaster at the site last year, no more than 16,000 people at a time will be allowed in and around the tomb complex on Wednesday-Thursday, according to regulations drafted by the Justice Ministry, the Religious Affairs Ministry and the police.

YWN recently reported that the regulations passed into law call for a three-month jail sentence and an administrative fine for anyone who violates the regulations, including those who arrive at Meron without a ticket or who fail to leave after four hours and anyone who operates an event at the site without the required permits.

The regulations apply over three days, Wednesday, Erev Lag B’Omer, Thursday, they day of Lag B’Omer, and Friday, the day after Lag B’Omer.

Video below of the scenes in Meron tonight.