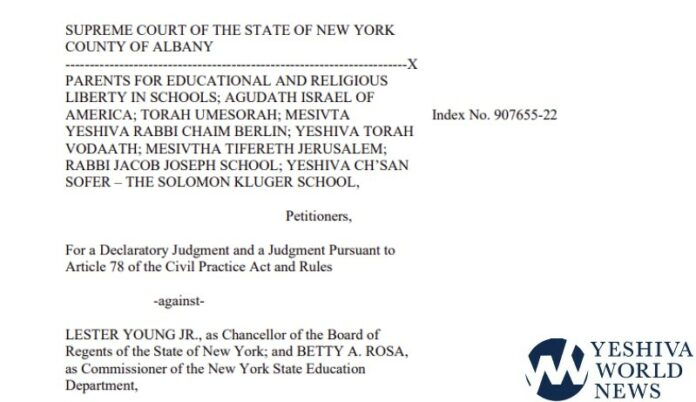 The organizations and yeshivas challenging the State Education Department’s new regulations filed a motion with the Albany Supreme Court seeking a preliminary injunction.
PEARLS, Torah Umesorah and Agudath Israel told the court in their papers that  the regulations “were designed so that yeshivas will be subject to their inspection and curricular requirements while almost all non-Jewish private schools in the State will be exempt” and they “go so far as to require local school authorities to assess and approve the teachers at yeshivas, threaten parents who send their children to these schools with draconian penalties, including jail, and threaten yeshivas with closure.”
During the 60 day public comment period this Spring, more than 300,000 yeshiva graduates and parents submitted comments opposing the regulations.  The State Education Department ignored every one of those comments, and adopted the regulations without any revisions.

The motion points out that “yeshiva parents have the fundamental right to control the upbringing and education of their children, yet the Regulations ignore their constitutionally-protected interest by handing control over curriculum and faculty at yeshivas to local school authorities.”  The Regulations are also unconstitutional because they “target religious conduct for harsher treatment than secular programs . . . and . . . impose strict requirements on the substance of yeshiva curriculum, the language in which it can be taught, and those who can teach it.”

The motion for a preliminary injunction was supported by affidavits from leading Roshei Yeshiva, Rabbanim, academics and community leaders.

Avraham Weinstock of  Agudath Israel wrote in his affidavit that “the  regulations will affect yeshivas nearly exclusively.”

Professor Moshe Krakowski of Yeshiva University explained that the “regulations represent a deliberate attempt to forcefully change the religious life of a minority community. Even very small changes to curriculum and pedagogy in haredi and hasidic schools have large implications for the perpetuation of Orthodox religious life. The State should not interfere with the internal religious life of a community that is flourishing. Haredim and hasidim are good citizens, they earn good livings, and they contribute to society in innumerable ways. They are also highly educated . . . Talmud study may seem strange or foreign to outsiders, but outsiders’ parochialism is not a reason to dismiss it as irrelevant.”

Professor Aaron Twerski wrote that “Yeshivah education is remarkably effective in providing the tools necessary for success in the secular world” and noted the “emphasis on ethical and moral development, as well as cultural identity, traditions, and cohesion,” and the “critical thinking and analytical skills that far surpass those obtained by students at traditional schools.”

The State Education Department’s response is due in December.