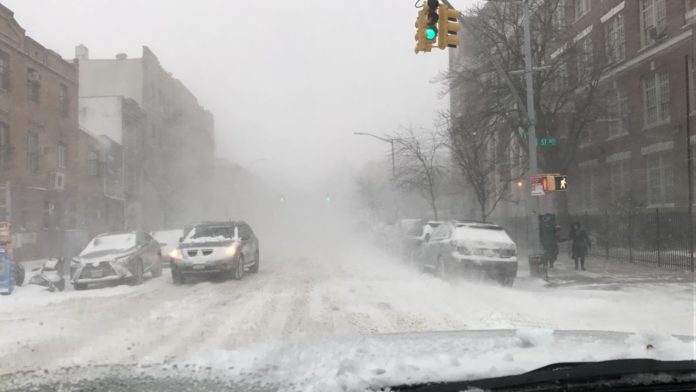 A monster nor’easter exploded off the east coast, slamming the tri-state from the Jersey Shore to Long Island, bringing the potential for up to a foot of snow and triggering winter storm and blizzard warnings across the Tri-State area.

In Suffolk County on Long Island and along parts of the Jersey Shore, blizzard conditions are expected with heavy snowfall in the morning followed by damaging winds up to 55 m.p.h. Up to a foot or more of snow was possible.

A winter storm warning has been issued for New York City and portions of southern Connecticut. As much as a half-foot of snow is expected in New York City.

Blizzard warnings are in effect for Nassau and Suffolk counties and much of coastal south Jersey, while winter storm warnings are in effect for the five boroughs, most of northeastern New Jersey and much of Connecticut. The rapidly intensifying storm prompted Gov. Cuomo to declare a state of emergency for New York City, Westchester and Long Island. Warning the worst is yet to come, the Democrat pleaded with people to stay off the roads.

Dangerously strong wind gusts will cause drifting and possible damage. Temperatures will also be rapidly dropping to the single digits.

Plan on difficult and dangerous travel conditions all day, even after the snow ends.