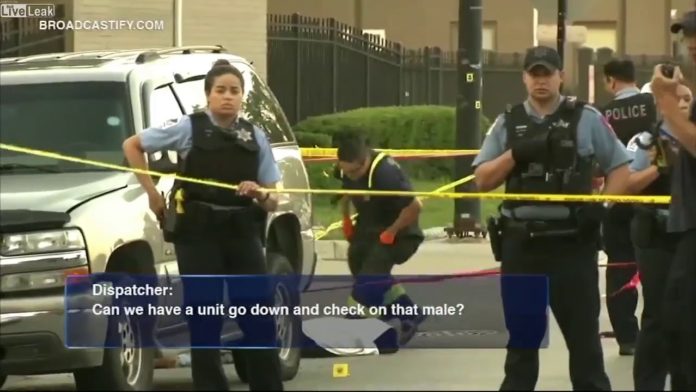 A 17-year-old Chicago boy shot several times in the head was mistaken for dead and covered with a sheet until bystanders noticed him moving and told paramedics.

Chicago Fire Department officials are trying to determine how the mix-up happened after the early Monday shooting that left one dead and five wounded.

Paramedics administered CPR to the boy, who was taken to Stroger Hospital in critical condition.

Fire Commissioner Jose Santiago said investigators are trying to piece together the decision making leading to the teenager being mistaken for dead.

Police say a woman whose name hasn’t been released was pronounced dead at the scene.

They say the gunfire erupted after two cars circled a party near the University of Illinois-Chicago campus.

Police said none of the surviving shooting victims are cooperating with investigators.

This man was shot at 4:30 this morning in Chicago and they had his body covered up as if he was dead. Paramedics didn’t even try to save him until someone pointed out that he was still breathing smh.. pic.twitter.com/7RDaZUn7PR