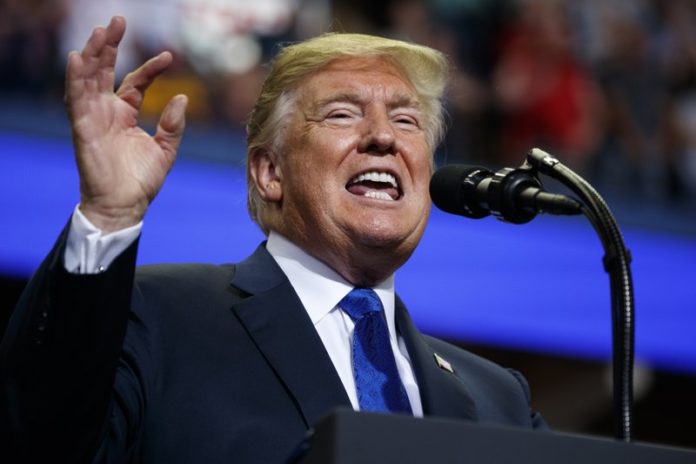 Men of America, be afraid. This could happen to you.

That’s the alarm President Donald Trump and his GOP allies are increasingly sounding as they try to defend their Supreme Court nominee from assault allegations. The three-decade-old accusation facing Brett Kavanaugh is not only false, they argue, but an example of the #MeToo movement gone too far in its call to believe the women – and not the men. It’s a message that looks to channel the frustration and anxieties of the party’s bedrock voters – white men – just weeks before an election.

This is “a scary time,” Trump said Tuesday. “It’s a very scary time for young men in America when you can be guilty of something that you may not be guilty of. You can be somebody that was perfect your entire life and somebody could accuse you of something … and you’re automatically guilty.”

At a campaign rally later in Mississippi, Trump pretended to be a son asking his mother how to respond to such an accusation. “It’s a damn sad situation,” Trump said.

The audience laughed as Trump ran through a list of what he described as holes in Ford’s testimony before the Senate Judiciary Committee.

Imitating Ford, he added, “But I had one beer — that’s the only thing I remember.”

It marked the sharpest criticism by Trump of Ford since she came forward publicly with the allegation last month. He had previously called Ford a “very credible witness.”

“And a man’s life is in tatters,” Trump said. Of Democrats, he added, “These are really evil people.”

He even raised questions about the drinking habits of Vermont Sen. Patrick Leahy in an attempt to turn the tables on Democrats who have gone after Kavanaugh’s beer drinking. Trump told the crowd they should do an online search for “Patrick Leahy slash drink.” Leahy’s office didn’t immediately return a message seeking comment Tuesday.

“Is it any wonder that she was terrified to come forward, and that other assault survivors are as well?” Bromwich tweeted. “She is a remarkable profile in courage. He is a profile in cowardice.”

Trump’s comments came as Republicans stare down a challenging midterm election and need to motivate their most reliable voters. All signs suggest Democratic women are energized by opposition to Trump’s presidency. The primary season yielded record numbers of female candidates. Kavanaugh’s confirmation battle and the national soul-searching over consent in relationships it has provoked threaten only to further motivate liberal female voters, leaving Republicans searching for a counterweight.

In his warning, Trump echoed some of his allies. Rep. Steve King of Iowa said “if Kavanaugh is not confirmed, every man is subject to seeing their life’s work and their reputation destroyed by an unsubstantiated allegation.” Sen. John Kennedy of Louisiana declared: “This is no country for creepy old men. Or young men. Or middle-aged men. But this is no country at all.” And Trump’s oldest son, Donald Trump Jr., told the Daily Mail this week: “I’ve got boys, and I’ve got girls. And when I see what’s going on right now, it’s scary,” adding that right now he fears more for his sons.

The rising frustration came as the Kavanaugh confirmation process played out before the country, with Kavanaugh and Ford appearing before the Senate Judiciary Committee last week to discuss her accusation. Kavanaugh’s confirmation continues to hang in the balance as the FBI investigates the allegation, which Kavanaugh has forcefully denied.

With the midterm elections just weeks away, Republicans risk losing the House and possibly the Senate as they face an energized Democratic party – particularly educated, suburban women and minorities – and a wave of GOP retirements, as well as the president’s sagging approval ratings and the tide of controversy around his White House.

Trump’s electoral strategy has long revolved around the argument that men “are somehow victims or they’re losing out to other people or they’re unfairly persecuted in an age of political correctness,” said Julian Zelizer, a political historian at Princeton University.

The November elections are “all about turnout, enthusiasm and motivation,” which Democrats have shown they have. “The question is: How can Trump or the Republicans counterbalance that? And this is the way that can do that,” Zelizer said. “It’s another way to shore up his base.”

“The disparity is stunning,” said Jim Malloy, assistant director of the Quinnipiac University Poll. “You usually don’t see this kind of divide between men and women on seminal, important issues.”

Polls show Republicans are more likely to be skeptical of the #MeToo movement, which has spurred women to come forward with their stories of assault and harassment, and to believe it has gone too far.

Republicans argue the Kavanaugh debate will drive enthusiasm among men and women.

Barry Bennett, a former senior Trump campaign adviser, accused Democrats of “hijacking the #MeToo movement,” and argued the way Kavanaugh has been treated is driving Republican enthusiasm with men and women.

“The one thing we’re seeing across is the country is (Republicans) are really energized. They’ve been woken up because of what’s happening to Brett,” he said. “If we play this smart, there maybe will not be a blue wave.”

Indeed, the Republican National Committee said it has seen a surge in donations over the last week, with Sunday marking the committee’s largest online fundraising day ever, according to an RNC official. The person, who spoke on condition of anonymity because the person wasn’t authorized to publicly reveal the figures, also said the party had logged 1,000 new small-dollar donors that day who had never previously given to the committee.

“I think they’re playing a dangerous game with this overt play to generate enthusiasm from their white, male base. As far as I can tell they already have those folks,” he said. “My bet is that this will just make Trump and the Republican Party even more radioactive with women voters.”