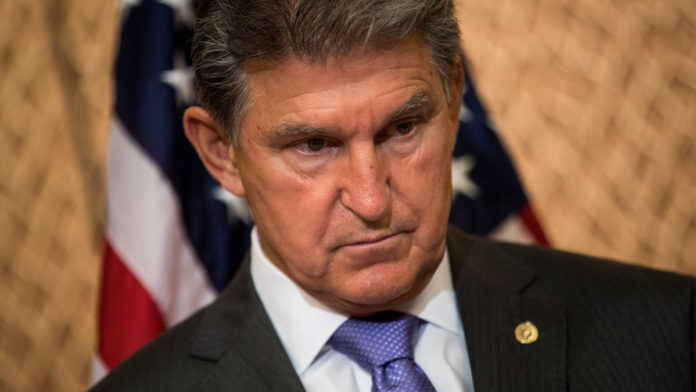 Danielle Walker cried on Joe Manchin’s shoulder after she shared her story of assault in the senator’s office. She thought he listened.

The 42-year-old Morgantown woman said she was both devastated and furious when Manchin became the only Democrat in the U.S. Senate to support President Donald Trump’s Supreme Court nominee, Brett Kavanaugh.

“I feel abused all over again,” Walker told The Associated Press.

A day after Manchin broke with his party on what may be the most consequential vote of the Trump era, the vulnerable Democrat is facing a political firestorm back home. While Republicans — including one of the president’s sons — are on the attack, the most passionate criticism is coming from Manchin’s very own Democratic base, a small but significant portion of the electorate he needs to turn out in force to win re-election next month. A Manchin loss would put his party’s hopes of regaining control of the Senate virtually out of reach.

Walker, a first-time Democratic candidate for the state legislature, said she may not vote at all in the state’s high-stakes Senate election. Julia Hamilton, a 30-year-old educator who serves on the executive committee of the Monongalia County Democratic Party, vowed to sit out the Senate race as well.

“At some point you have to draw a line,” Hamilton said. “I have heard from many, many people — especially women. They won’t be voting for Manchin either.”

Manchin defended his vote in a Sunday interview as being based on fact, not emotion. He praised the women who shared their stories of sexual trauma, Walker among them, but said he “could not find any type of link or connection” that Kavanaugh was a rapist.

“They weren’t going to be satisfied, or their healing process, until we convicted this person,” Manchin told The Associated Press. “I couldn’t do it. You talk about two wrongs trying to make a right. It just wasn’t in my heart and soul to do that.”

Manchin insisted over and over that his vote wasn’t based on politics.

There is little doubt, however, that his vote was in line with the wishes of many West Virginia voters, who gave Trump a victory in 2016 by 42 percentage points. There simply aren’t enough Democrats in the state to re-elect Manchin. He needs a significant chunk of Trump’s base to win.

“If he didn’t vote for Kavanaugh he could have kissed his seat goodbye,” Ferguson said.

While he may have represented the majority of his state, Manchin’s political challenges are far from over.

The clash over Kavanaugh, who was confirmed by the Senate on Saturday, has injected new energy into each party’s political base. While that may help Democrats in their fight for the House majority, which is largely taking place in America’s suburbs, there are signs it’s hurting vulnerable Democrats in rural Republican-leaning states like North Dakota, Missouri and West Virginia. Phil Bredesen, who said he would have voted for Kavanaugh, could also face new challenges in his bid to flip Tennessee’s Senate seat to the Democratic column.

For much of the year, Manchin has held a significant lead in public and private polls over his Republican opponent, state Attorney General Patrick Morrisey. Yet Republican operatives familiar with the race report a definite tightening over the last week.

In an interview, Morrisey called Democrats’ fight against Kavanaugh a “three-ring circus” that “energized a lot of people in West Virginia.”

He acknowledged that Manchin voted the right way for the state, but called the vote “irrelevant” because another swing vote, Maine Republican Sen. Susan Collins, had already given Kavanaugh the final vote he needed.

“He waited until the last possible minute after Susan Collins declared for him to take a position, effectively allowing Maine to decide how West Virginia’s going to decide,” Morrisey charged. “We shouldn’t reward that kind of cowardice.”

When asked about the social media jab, the West Virginia senator slapped away the insult from the younger Trump.

Donald Trump Jr. is “entitled to his opinion, he’s just not entitled to his own facts to justify what he’s saying. He doesn’t really know anything,” Manchin told the AP.

The Democrat conceded that he followed Collins’ lead out of “respect” — he didn’t want to get in the way of her high-profile Friday afternoon announcement on the Senate floor.

“Nothing would have changed my vote,” Manchin declared. “Susan took the lead, Susan did the due diligence. … She’s going to give her speech and I’m not going to jump in front of 3 o’clock. I’m just not going to do it.”

That wasn’t good enough for Tammy Means, a 57-year-old florist from Charleston, who was among thousands tailgating outside West Virginia University’s football stadium in Morgantown on Saturday.

Means, a registered Democrat who voted for Trump, said she also voted for Manchin in the past.

“I’m not going to anymore. Nope,” she said with a laugh as she sipped a Smirnoff Ice. She’s glad Manchin voted for Kavanaugh, but said, “He’s just doing it so he can get elected.”

Across the parking lot, 63-year-old John Vdovjac said he was deeply disappointed by Manchin’s vote. Still, the Democrat said he’d probably vote for Manchin this fall.

“I recognize the position he’s in because the state’s heavily Republican now,” said Vdovjac, a retired educator from Wheeling, as he helped grill hotdogs and hamburgers. “But he’s lost my loyalty.

Manchin knows he needs to explain his vote to his constituents, although he didn’t have any public events scheduled this weekend. Before and after the AP interview, conducted at Charleston’s International House of Pancakes, he told everyone who would listen — including his waitress — that his Kavanaugh vote was not based on emotion.

“I made my decision based on facts,” the senator told Kevin Estep, a 57-year-old registered Democrat and Trump voter who was eating buttered pancakes with his family.

“You hang in there and vote your heart,” Estep, who lives in nearby St. Albans, told the senator.

After Manchin left the building, Estep warned that the #MeToo movement “is like a dam that’s about to break open.”

Asked whether he’d support Manchin this fall, he responded, “Always.”