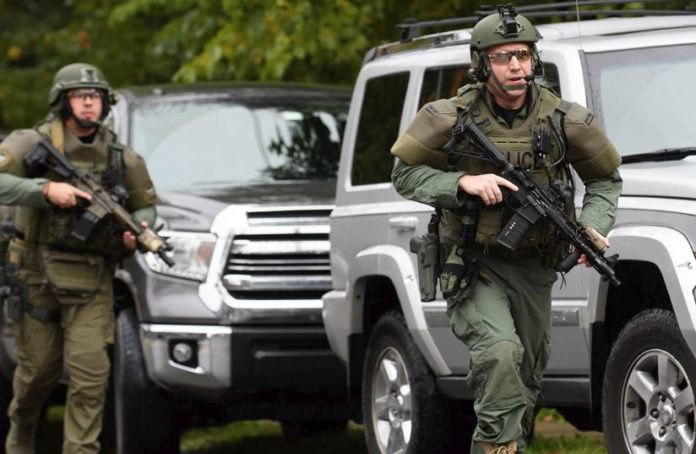 The murder of eleven people during a Shabbos service this morning in a Pittsburgh synagogue is a horrific tragedy and an outrage. Our deepest sympathies go out to the mourning families and friends of the victims who were targeted because they were Jews. We extend our deepest gratitude to the law enforcement personnel who arrived at the scene and captured the murderer. We also thank law enforcement across the country who are ramping up security measures around houses of worship.

There are simply no words of condemnation that can truly express our anguish and disgust at the perpetrator of this hate-fueled act or others like it. Any platform or group, including those on social media, that serves to stir up and metastasize bigotry and anti-Semitic hatred, needs to be called out and shut down for incitement of violence. Until all Americans confront the horror of anti-Semitism head on, our great Democracy will not have achieved its promise.

May those who were injured in today’s senseless violence have a speedy and complete recovery from their wounds.

People of faith, while doing what I was doing this morning – gathering in shul – are dead. A heinous, vicious act of hate against the Jewish people. My heart aches for them, their families, the survivors and for a community in pain.

“Our hearts break for the families of those killed and injured at the Tree of Life Synagogue, and for the entire Jewish community of Pittsburgh. This is likely the deadliest attack on the Jewish community in the history of the United States. We are actively engaged with law enforcement to support their investigation and call on authorities to investigate this as a hate crime.

It is simply unconscionable for Jews to be targeted during worship on a Sabbath morning, and unthinkable that it would happen in the United States of America in this day and age. Unfortunately, this violent attack – the deadliest anti-Semitic attack in the United States since 2014 – occurs at time when ADL has reported a historic increase in both anti-Semitic incidents and anti-Semitic online harassment. As we mourn those lost and search for answers, ADL will remain steadfast in its mission to fight anti-Semitism wherever and whenever it may occur.”

The Union of Orthodox Jewish Congregations of America and the Rabbinical Council of America express their deepest sympathy to the families of those who lost their lives in the horrific murders that took place during Shabbat services this morning at the Tree of Life Congregation in Pittsburgh. We pray for the speedy recovery of those injured in the shooting, including the brave police officers who rushed directly into the active crime scene.

“This senseless act of anti-Semitic violence was not only an egregious attack on the Jewish community, but an attack on the very foundations of civil society and our collective democratic values,” said Allen Fagin, the Orthodox Union’s executive vice president.

“Our hearts break for the senseless murder of our fellow Jews and all victims of vicious hate crimes,” said Moishe Bane, president of the Orthodox Union. “We condemn the dangerous rhetoric that foments such senseless violence and we stand with the Tree of Life Congregation and the whole Pittsburgh community at this terrible time.”

“We live in contentious times, when fringe elements of society have become emboldened by speech which is often disrespectful and hateful,” said Rabbi Elazar Muskin, president of the Rabbinical Council of America. “As a nation, committed to the freedom and rights of all, we must commit to reach out not only to those who are like us – but especially as our sacred Torah has taught us – to those with whom we disagree.”

“One of the greatest privileges of those who are fortunate to be citizens of the United States is the freedom to worship as we believe and to live in safety and security. We need to come together as a nation to protect these precious gifts for all members of all faiths,” said Rabbi Mark Dratch, executive vice president of the Rabbinical Council of America.

The FJCC is shocked and saddened by the horrific murders of innocent Jewish congregants while at a Synagogue in Pittsburgh. ‎

Our hearts and prayers are with the families and friends of the victims, and we wish a speedy recovery to those who were injured.

We join all people of good will across the world and strongly condemn all acts of anti- Semitism racism and bigotry. But condemnation itself is simply not sufficient. We must work together to challenge hatred with words and deeds and call upon all New Yorkers and elected officials here at home to join us in this battle. An attack on a Jew anywhere is an attack on Jews everywhere. Enough.

We once again thank the NYPD and members of law enforcement for their diligence and professionalism in protecting our community today and everyday. 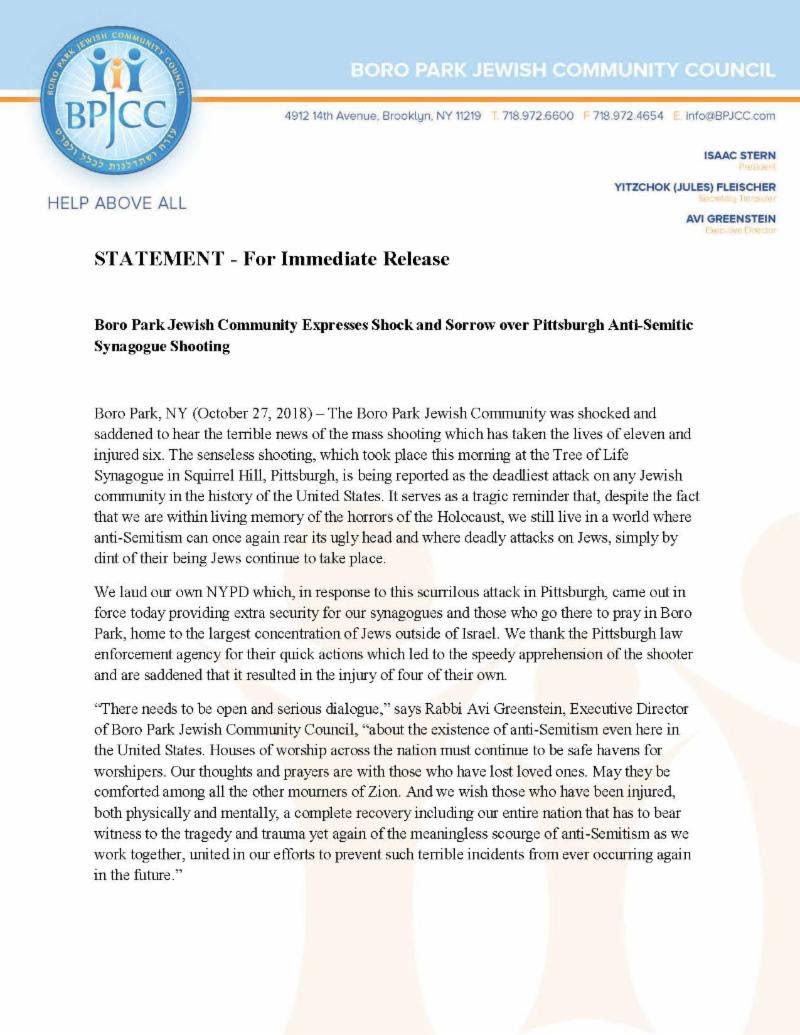 Our hearts are with the families of those lost and injured in today’s anti-Semitic attack in Pittsburg. It’s heartbreaking that baseless hatred brought about these tragic consequences. Tonight, New Yorkers express solidarity with our Pennsylvanian neighbors. Standing together to condemn hatred and bias brings people of all faiths together in unity.

May God bless the families of all those affected by today’s tragedy.

Like so many others, I came online after Shabbos to the terrible news of a deadly anti-Semitic attack this morning in Pennsylvania.

Today I went to shul with my family to pray & tomorrow I’ll do the same. But 11 of my brethren won’t have that opportunity ever again. I’m deeply, deeply saddened at this horrific loss.

May God bless their families and all those injured.

With profound sorrow and grief, we extend our boundless expressions of support and solidarity to the victims, their families, and the survivors of the brutal, horrendous attack that took place this Sabbath morning at the Tree of Life Synagogue in the Squirrel Hill neighborhood of Pittsburg, Pennsylvania. We commend the brave members of the Pittsburgh Police Department and first–responders who rushed to aid the injured and to courageously contain the appalling and evil carnage perpetrated by a malevolent and hateful individual seeking to murder innocent people gathered in celebration of faith, life and community.

The Rabbinical Alliance of America (RAA) — Igud HaRabbonim, with a membership of over 950 Orthodox Rabbis across the United States and Canada — calls upon all people of goodwill to unite in prayer to our Creator beseeching His protection and to increase in acts of charity and loving-kindness to help heal our fractured society. Rabbi Yehoshua S. Hecht, Chairman of the RAA presidium, asks all member rabbis to call for additional prayers to be recited immediately at all prayer services for the healing of the injured amongst the civilian and police.

Rabbi Mendy Mirocznik, Executive Vice President of the RAA, stated that, “A hate attack on anyone is an attack on all of society. All decent people must come together to condemn such evil.”

May the One who makes peace in the Heavenly heights make peace upon us and upon all Israel, Amen.

“This evil Anti-Semitic attack is an assault on humanity. It will take all of us working together to extract the poison of Anti-Semitism from our world. We must unite to conquer hate.” — President Donald Trump.

“We grieve for the Americans murdered in Pittsburgh. All of us have to fight the rise of anti-Semitism and hateful rhetoric against those who look, love, or pray differently. And we have to stop making it so easy for those who want to harm the innocent to get their hands on a gun.” — former President Barack Obama.

“The actions of Robert Bowers represent the worst of humanity.” — Scott Brady, U.S. Attorney for the Western District of Pennsylvania.

“Today, we saw another horrific act of hate at a house of worship — this time, the murder of at least eight congregants at Pittsburgh’s Tree of Life Synagogue … It reminds us of the slaughter of nine African American worshippers at Charleston’s Mother Emmanuel Church in 2015, the killings of six Sikh worshippers at a temple in Oak Creek, Wisconsin, in 2014, and, of course, the bombing of Birmingham’s 16th Street Baptist Church in 1963 that left four young African American girls dead. The violence in Pittsburgh follows on the heels of a string of attempted pipe bombings by a white supremacist who targeted frequent critics of President Trump. Our hearts go out to the families of the most recent shootings.” — Richard Cohen, president of the Southern Poverty Law Center.

“We are devastated. Jews targeted on Shabbat morning at synagogue, a holy place of worship, is unconscionable. Our hearts break for the victims, their families, and the entire Jewish community.” — Jonathan Greenblatt, CEO of the Anti-Defamation League.

“I was heartbroken and appalled by the murderous attack on a Pittsburgh synagogue today. The entire people of Israel grieve with the families of the dead. We stand together with the Jewish community of Pittsburgh. We stand together with the American people in the face of this horrendous anti-Semitic brutality. And we all pray for the speedy recovery of the wounded.” — Israeli Prime Minister Benjamin Netanyahu in a video message posted online.

“This has always been a thought in the back of my mind, scenarios just like this. During the week the building is locked. We have a security camera to see who comes. But on Sabbath it’s an open door. And there are people right there where he would have walked in.” — Chuck Diamond, former Rabbi at the Tree of Life Synagogue.

“When Jews are murdered in Pittsburgh, the people of Israel feel pain. All Israel are responsible for one another.” — Naftali Bennett, Minister of Education and Minister of Diaspora Affairs in Israel.

“We are thinking of ‘our brothers and sisters, the whole house of Israel, in this time of trouble,’ as we say in the morning prayers. We are thinking of the families of those who were murdered and praying for the quick recovery of those who were injured. I am sure that the law enforcement agencies and the legal authorities in the U.S. will investigate this horrific event thoroughly and that justice will be served on the despicable murderer.” — Israeli President Reuven Rivlin.

“We send our thoughts and prayers to those affected by this morning’s tragedy in Pittsburgh. We will continue to pray for everyone involved.” — Pittsburgh Steelers.

“We are incredibly saddened to hear of this morning’s tragedy at the Tree of Life synagogue in Pittsburgh. We send our thoughts and prayers to all those affected.” — Pittsburgh Penguins.

“We are sickened by this horrific attack at the Tree of Life synagogue in Pittsburgh’s historic Jewish neighborhood. Our thoughts and prayers are with the families of the dead and injured as well as the rest of the congregation and Jewish community.” — Simon Wiesenthal Center.