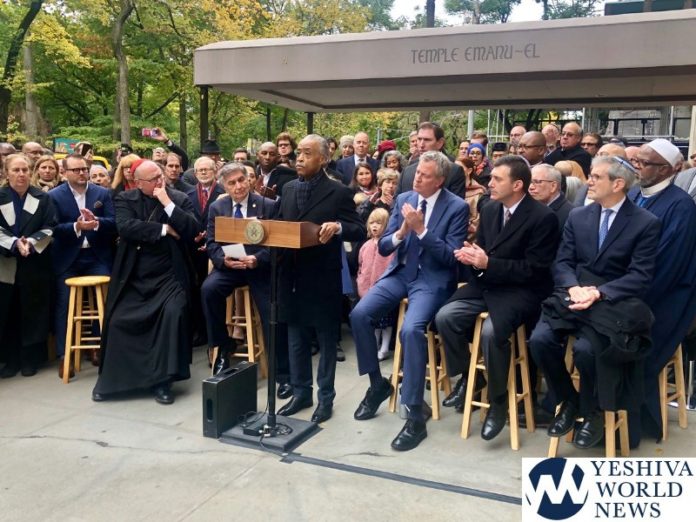 An interfaith gathering was held at Temple Emanuel in Manhattan on Sunday, following the horrific Shabbos morning massacre at a synagogue in Pittsburgh, Pennsylvania.

Among those speaking and attending were Mayor Bill DeBlasio, Cardinal Dolan
Rabbis Joe Potasnik and Michael Miller, Imam Al-Hajj Talib and members of the Commission of Religious Leaders.

One of the guests was the “Reverend” Al Sharpton, the anti-semite, who fueled the Crown Heights riots more than two decades ago.

Al Sharpton wasn’t always an unrepentant MSNBC star, and first-in-line to agitate a racial situation anywhere in the country. Twenty-seven years ago a tragic car accident in Crown Heights Brooklyn escalated into a pogrom against the Jewish people. The media usually gives it a politically correct description: “violence between the area’s Blacks and Jews.” But the violence was not two-sided. The Crown Heights riot was an attack on the Jews by the neighborhood’s Caribbean community, fueled in large part by Al Sharpton, the “Reverend” who does not believe in the commandment about “bearing false witness.”

As Sundays gathering, Sharpton said he previously was outraged after the 2015 shooting at Emanuel Church in Charleston which left nine people murdered. He said he called the victims “The Emanuel 9″. He said we need to be equally outraged of the Tree of Life 11”.

This is the same Al Sharpton, who on the third day following the tragic Crown Heights car accident, joined Sonny Carson and led a march. The marchers proceeded through Crown Heights, carrying anti-semitic signs and an Israeli flag was burned. Rioters threw bricks and bottles at police; shots were fired at police and police cars were pelted and overturned, including the Police Commissioner’s car.

This is the “reverend” who is now preaching “peace and love” and is called upon to remember the 11 Jews gunned down while in their Synagogue on a Shabbos morning.

“Jewish,Christian & Muslim leaders gathered w/city officials in a show of unity to condemn hatred in the wake of a shooting at a Pittsburgh synagogue that killed 11…The interfaith gathering at Temple Emanu-El included Cardinal Dolan, Rev. Al Sharpton…”-https://t.co/75x46kWTF0 pic.twitter.com/OMuP1HImvf

“Until we can share each other’s pain with equal outrage, we continue to normalize this bias and biogtry,” @TheRevAl said Sunday during an event with other religious leaders to condemn the Pittsburgh synagogue shooting. https://t.co/awf9F8RtB4 pic.twitter.com/isXt7cMg6b

I'm at Temple Emanu-El with faith leaders from across our city to stand against hate in all of its forms. https://t.co/9NRN7cJW1n