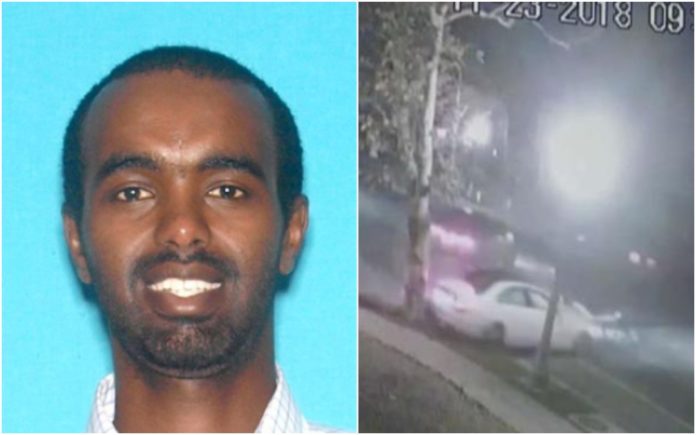 A man accused of trying to run over two Jewish men outside a Los Angeles synagogue on Friday night deliberately drove from Seattle with the intent of committing a hate crime, a prosecutor said Tuesday.

In a story first reported by YWN, 32-year-old Mohamed Abdi Mohamed, a Somali immigrant, was arrested outside Congregation Bais Yehuda after the incident, which took place around 9 p.m. on Friday, the Los Angeles Police Department said Monday.

The men reported they saw a vehicle being driven by a man, identified as Mohamed, who was shouting anti-Semitic expletives “referencing their Jewish heritage”, before running a red light, making a U-Turn and accelerating towards them “really, really fast.”

The men, 37 and 57, took cover behind a car and an electrical box. The suspect made another U-turn and again targeted the men before speeding away. He then crashed into another car several blocks away, in the largely Jewish Wilshire-area neighborhood, police said.

No injuries were reported. Mohamed was taken into custody and was also found carrying a knife. A Koran was seen on the dashboard of his car.

“The reason we knew he was coming at us is because, when he did the U-turn, he was burning rubber, so it additionally caught our attention,” one of the victims, who wished to not be identified, told YWN. “He came within inches or feet from us and we both scrambled in different directions. He backed up and tried hitting me while my friend ran into the synagogue.”

Mohamed was charged with two felony counts of assault with a deadly weapon – his vehicle – and a hate crime allegation, according to the Los Angeles County District Attorney’s Office.

He faces a maximum sentence of eight years and eight months in state prison, the DA’s office said.

Mohamed entered a not-guilty plea through his public defender, in a downtown LA courtroom on Tuesday. He was ordered held on $500,000 bail.

Bail was initially set at $55,000, but the prosecution argued he represented a flight risk, referring to organizations that might be willing to help him out by posting his bail.

Mohamed is a U.S. citizen who arrived as a refugee from Somali years ago, according to the District Attorney’s Office. He was living in the Seattle area and working as a Lyft driver.

The prosecutor said Mohamed rented a car in Seattle on Friday and drove to Los Angeles with the intent of committing a hate crime.

LAPD Chief Michel Moore said there was no evidence Mohamed acted with others as part of a plot, but the department was working with the FBI and others in the Joint Terrorism Task force to investigate the incident further.

HATE IN #LOSANGELES – CAUGHT ON CAMERA: Several Orthodox #Jews were walking on Le Brea Blvd and Oakwood – in front of the Bais Yehuda Shul, when a vehicle drove past screaming anti-Semitic slurs at them. (2nd video) One of the victims told YWN the vehicle made an abrupt U-Turn (2nd & 3rd videos) and began hurling anti-semitic slurs before attempting to run over the group of identifiable Orthodox Jews. The vehicle sped off and was involved in a car accident at the intersection of Highland and Oakwood. (1st video) . The victim tell YWN that there was a Koran on the windshield, and the driver was of Middle-Eastern descent. Additionally, after the LAPD arrived at the scene of the crash, the man continued on his anti-Semitic rant.