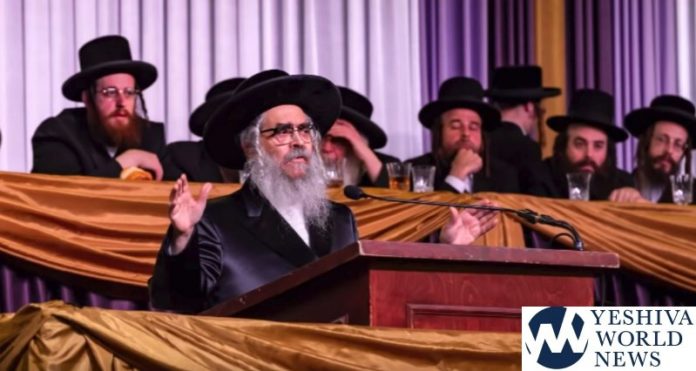 The Satmar Rebbe of Kiryas Joel delivered a fiery speech last night, during which he effectively declared war against the NYS Education Department. The speech was delivered at the 74th annual “Chuf Alef Kislev” event, the day Hagaon HaRav Yoel Teitelbaum ZATZAL, the founder of Satmar Chassidus in America, escaped from the Nazis during the Holocaust in 1944.

The gathering was held at a massive warehouse in Williamsburg, with thousands of Chassidim in attendance.

The highlight of the annual Yom Hatzoloh event is the speech by the Rebbe, using the forum to address some of the burning issues on the agenda, both in Eretz Yisrael and primarily, outside of Israel.

This is cause for serious concern to many, and this year, the Satmar Rebbe dedicated his annual speech to addressing this new Gezeira, vowing a tenacious fight in what it sees as state intervention in the education of the tenokos shel beis raban, an unacceptable situation to put it mildly.

The Rebbe gave clear instructions to his followers to defy the Education Department’s new orders, noting that the yeshiva system’s successes far outweigh those of the alternative, public schools, which he blasted as needing far more reform than yeshivos.

In his approximately 60 minute long address, the Rebbe first addressed the situation surrounding a new IDF draft law in Israel, which may be legislated in the near future, vowing to fight “that not a single bochur will fall to the Zionists R”L”. The Rebbe then addressed the harsh Gezeira being faced by yeshivos in New York State as a result of the new state educational guidelines mentioned above.

The Rebbe then slammed New York State Commissioner of Education MaryEllen Elia, “who conspired with traitors and the wicked to persecute chareidi Yiddishkeit in New York, which only wants to educate its children in accordance to Torah and tradition as has been from generation to generation, in talmidei torah, in yeshivos ketanos, and in girls schools” cried the Rebbe.

The Rebbe continued: “She wants to change Klal Yisrael and remove us from our religion exactly as the Greeks wanted in their time, to destroy the education institutions, a decree of extermination (shmad). Who would have thought that here, in the greatest democracy in the world, a time would come when a decree on education would become reality?”

“I hereby declare that Klal Yisroel will not bow down or surrender to the wicked, not even before the Commissioner of Education, and with great devotion we will be able to educate our children in Torah education. We have had many situations in the past demanding mesirus nefesh for the Torah HaKadosha, and also today, we will launch a major war against the Commissioner of Education in any way [necessary] without compromises and agreements.”

“In a democratic country there is freedom of religion and they have no right to interfere in our religion, and if the Commissioner of Education wants to improve education in the State of New York, please ask the public schools to correct their education curriculum. We have been living in New York for 70 years, which is already a number of generations, and one can already see the fruit of our education as compared to the public-school education. In our schools they do not murder, there is no violence, no drug sales and no thieves. Even percentage wise, we are more successful than the public school graduates,” the rebbe continued.

Percentage wise, we contribute more to the economy with the graduates of our institutions than the graduates of their institutions. Therefore, the government has turned a blind eye to this day and they realized that even though they invest $25,000 per student in government schools, compared with a few tens of dollars per student in transportation and other budgets, they benefit a great deal more from the students of the Jewish education versus their graduates.”

“Therefore,” the Rebbe concluded, “we will not sit idly by but we will fight a fierce battle over our right to live in our religion, and B’ezras Hashem, we will cancel this terrible gezeira and will not obey the Education Commissioner in any way. Of course, it will only happen if there is achdus. We must put all the petty politics aside and to seriously unite all the communities and unite all of the chareidi Jews, to exploit the ties with the leaders of state, to the federal court, and B’Shem Hashem, Na’ase V’Natzliach!”

😱😱😱 How many pieces of #Gefilte Fish do you see? All were served at the massive #Satmar Chof Aleph Kislev event in #Willaimsburg, #Brooklyn #jews #jewish #gefiltefish #heimish #yummy