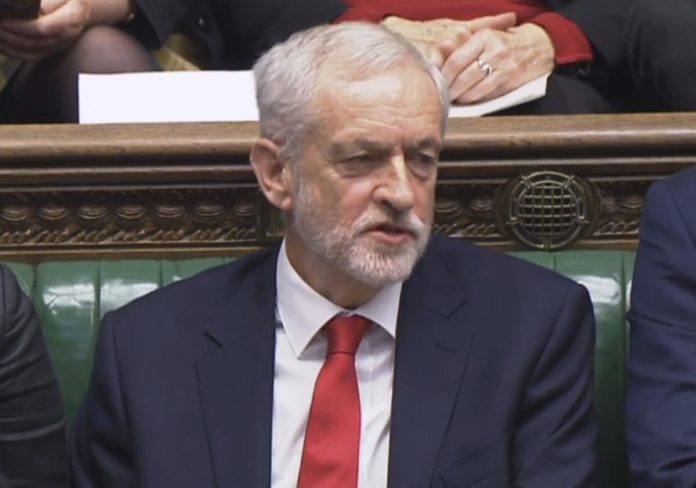 Britain’s main opposition leader sparked a political furor Wednesday after he was accused of calling Prime Minister Theresa May a “stupid woman” in the House of Commons.

He denied, it, saying instead that he had called Conservative lawmakers “stupid people.”

The always-lively session was even more heated than usual, as lawmakers’ frustrations and divisions over Brexit boiled over into raucous shouting and personal jibes. Britain expected to leave the European Union on March 29 but lawmakers from many political stances are against May’s Brexit plan.

Conservative legislators yelled “Shame!” and “Disgraceful!” at Corbyn after the alleged jibe.

“I did not use the words ‘stupid woman’ about the prime minister or anyone else, and am completely opposed to the use of sexist or misogynist language in absolutely any form at all,” Corbyn said.

The incident came as Britain’s Parliament attempts to end bullying, abuse and sexual harassment. Earlier this year, a cross-party working group reported that one in five parliamentary workers had experienced or witnessed sexual harassment in the previous year.

This is funny. A Tory MP heckles a very serious Jeremy Corbin: “Who are you?” | pic.twitter.com/YvUSVqf4yi

It’s not the first time a male political leader in Britain has been accused of using sexist language.

In 2011, then-Prime Minister David Cameron was accused of sexism when he adopted a catchphrase from a popular commercial and told a female lawmaker to “calm down, dear.”

As British media outlets enlisted lipreaders to try to determine what exactly Corbyn had said, actor Rob Lowe was among those who offered their opinions on social media.

“FYI- I have to say, I saw Jeremy Corbin call the Prime Minister a “stupid woman” with my own eyes watching on @SkyNewsPolitics,” Lowe tweeted.

Did Jeremy Corbyn call Theresa May a “stupid woman”? PMQs ended in fiery exchanges between MPs after the Labour leader appeared to mouth the phrase. A Labour spokesperson claimed he said “stupid people”.

What do you think he said? Find out more here: https://t.co/j5Al4jaTKE pic.twitter.com/fjCTn3c1Gd