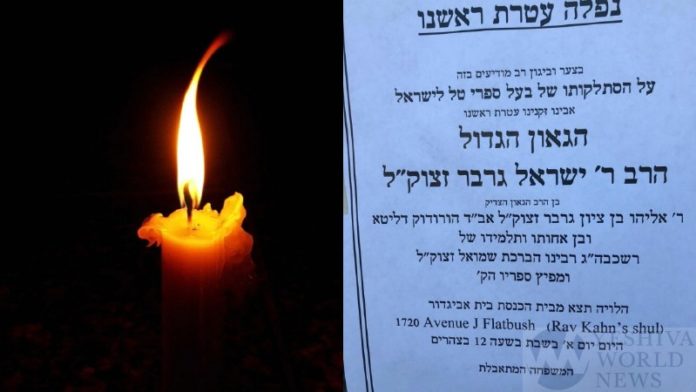 YWN regrets to inform you of the Petira of Hagaon HaRav Yisroel Garber ZATZAL.

HaRav Garber, who was a talmid and nephew of Hagaon HaRav Baruch Ber Lebowitz ZATZAL of Kaminetz, was the mechaber of nine volumes of Sefer Tal Yisroel on numerous Masechtos. He was niftar beseiva tovah. He was 98.

After surviving the war with the Mirrer Yeshiva in Shanghai, he resettled in America and after spending some time in Chinuch HaBanos, he founded the Bais Yaakov of the East Side, Bais Yaakov of 18th Ave and Camp Tubby in Woodbourne, which are currently run by his daughters, Rebbitzen Rochel Kahn and Rebbitzen Sori Ziemba and her husband Rav Moshe Avigdor.

The Levayah is scheduled to take place Sunday 12 noon, at Knesses Bais Avigdor, 1720 Ave J Brooklyn, NY 11230, and the aron will be flown to Eretz Yisroel, where another levayah in the Kamenitzer Yeshiva in Yerushalayim will take place followed by kevurah on Har Manenuchos.