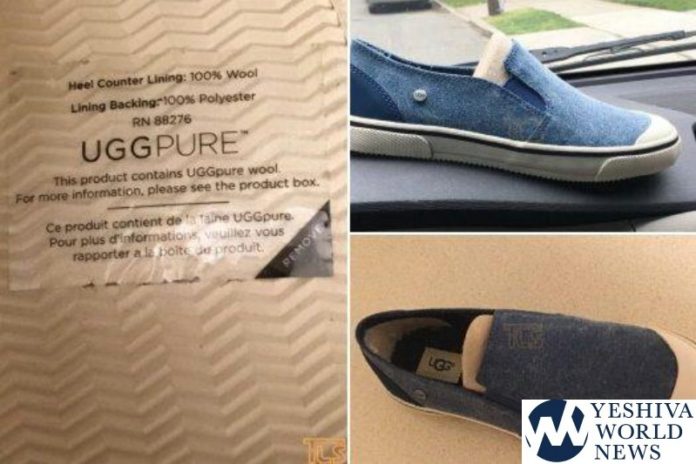 They come in boots, slippers and sneakers.

They are called Uggs and they are behind the first major Shatnez crisis of 2019. In the writing of this article the author has been in touch with three Shatnez laboratories (among them the well-respected Rabbi Yosef Sayag from the International Headquarters of Professional Shatnez Testers in Lakewood, NY) and the Uggs company itself. 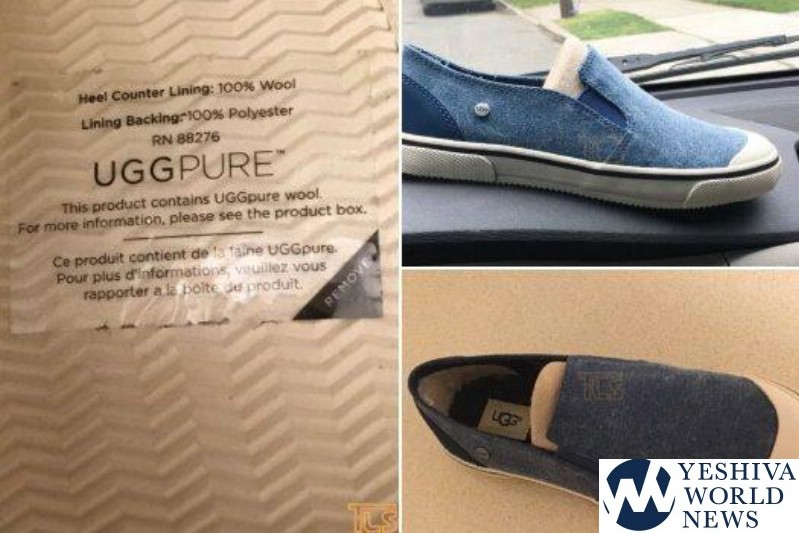 Jan ’18 – From the desk of the Lakewood Shatnez Laboratory Please note, when testing an Ugg slipper, remember to remove the insole. Underneath lays a reprocessed canvas that requires testing. See pictures. 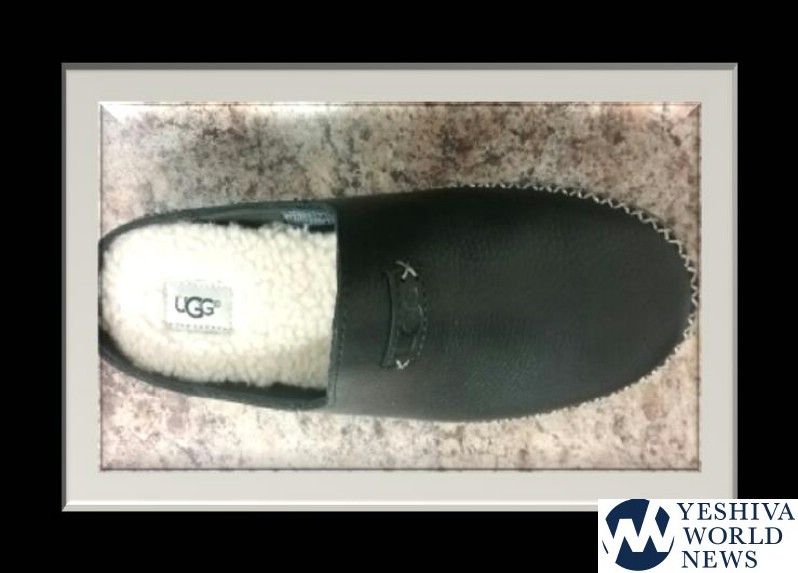 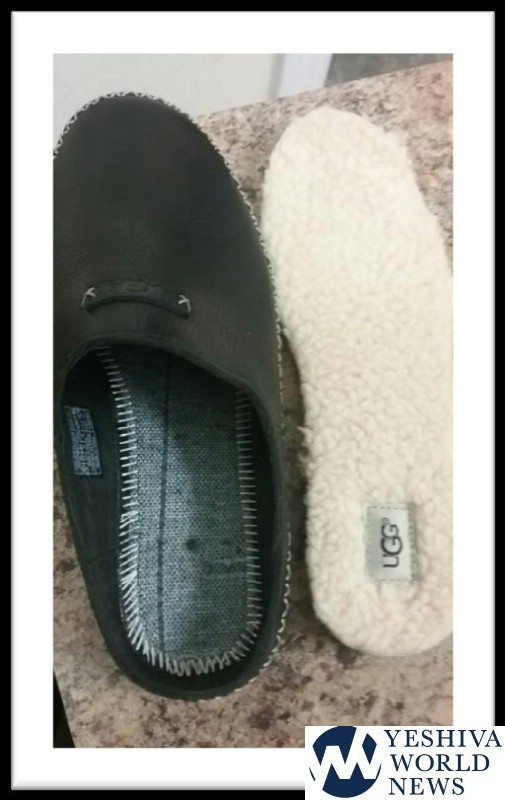 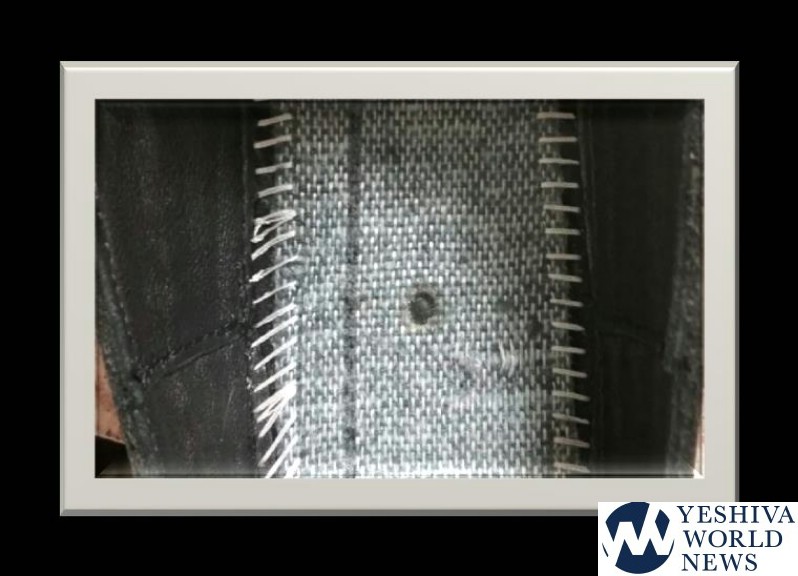 A red Ugg lady’s canvas shoe was brought to the Lakewood Shatnez Test Center, for testing.

The upper part of the shoe was a linen blend. A piece of wool was attached to the heal, inside the shoe. 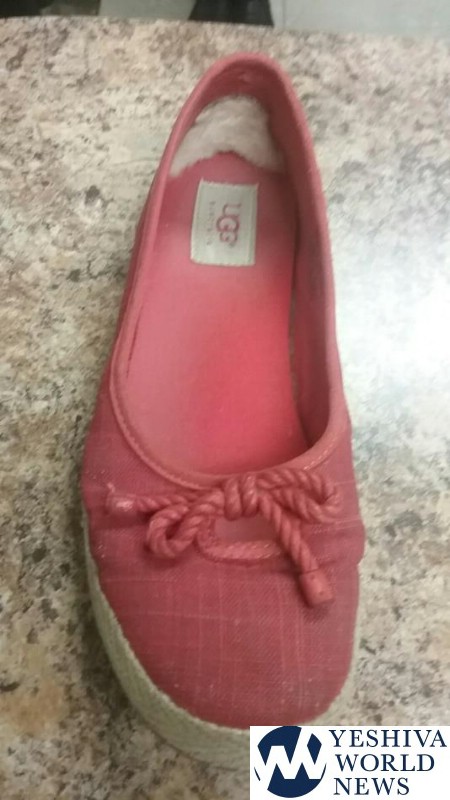 A Woolen Ugg boots was brought to the Gateshead Shatnez Laboratory. The bottom rim by the sole is a Linen blend. 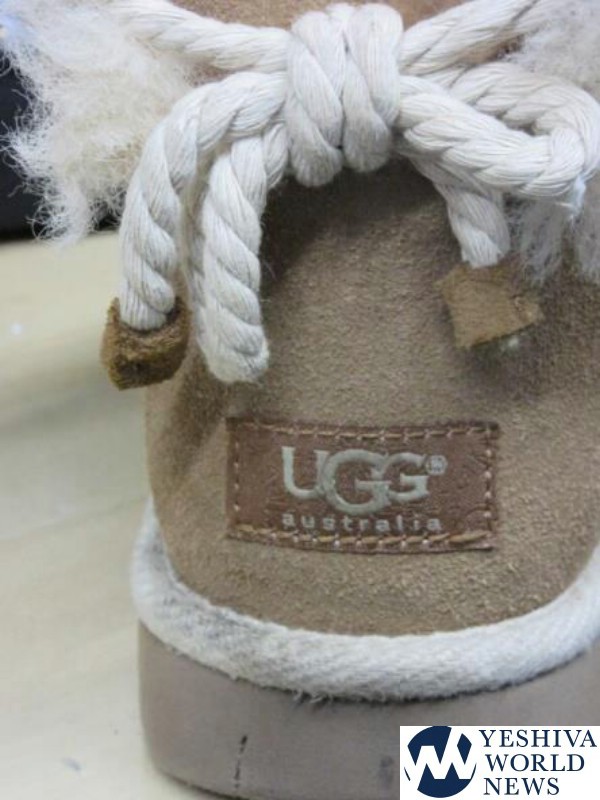 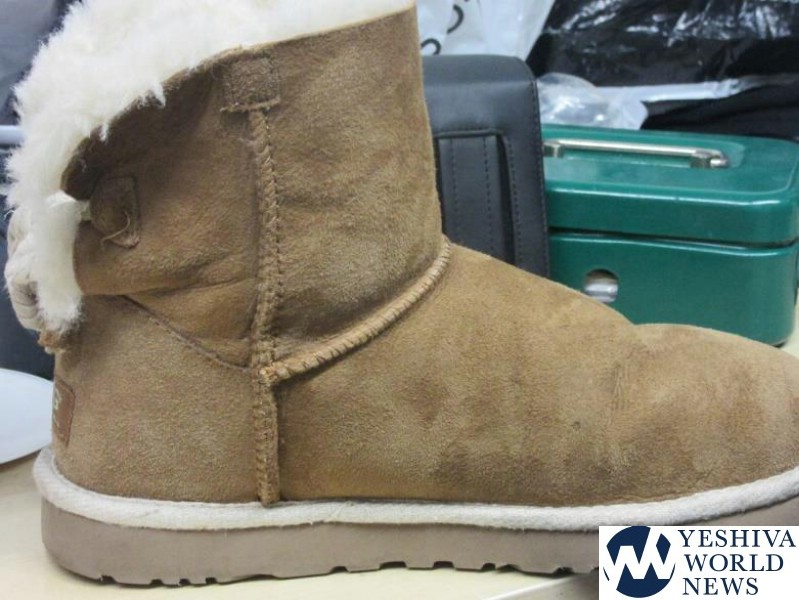 Ugg slippers – From the desk of the Lakewood Shatnez Laboratory

The UGG (Australia) slipper shown in the picture to the left was tested by R’ Yosef Sayagh in the Lakewood Shatnez Laboratory.

The inside of the slipper is lined with wool. 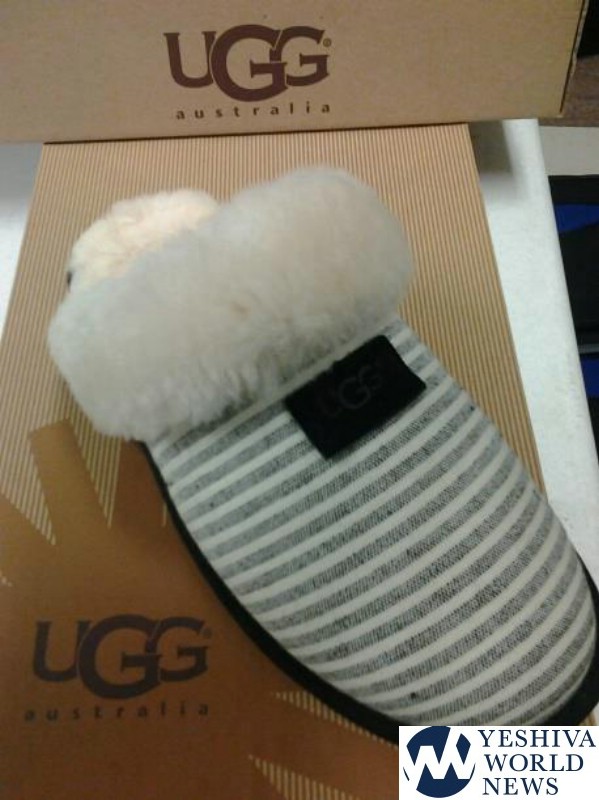 This UGG (Australia) shoe sneaker shown in the picture to the right was tested by R’ Yosef Sayagh in the Lakewood Shatnez Laboratory.

The outer fabric was listed as 85% Wool, 15% Nylon. It was mislabeled; it really was a linencotton blend. The inside of the shoe sneaker had some wool attached to it. 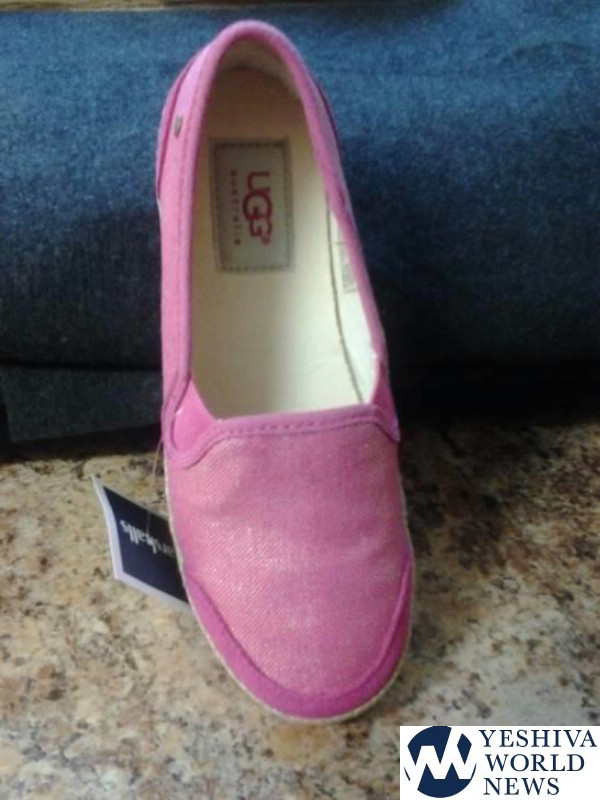 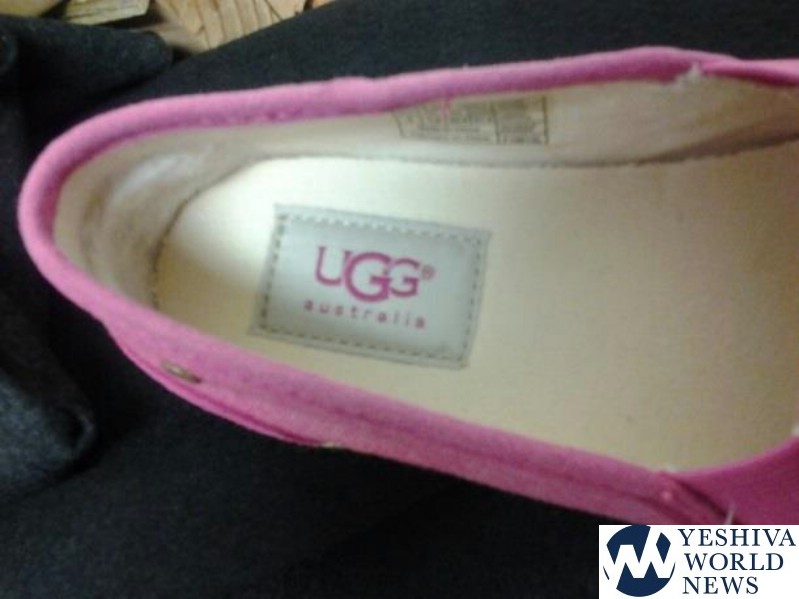 Just found underneath the wool fleece lining, of an Ugg moccasin slipper a piece of starched linen. It was located behind the tag, see pictures. 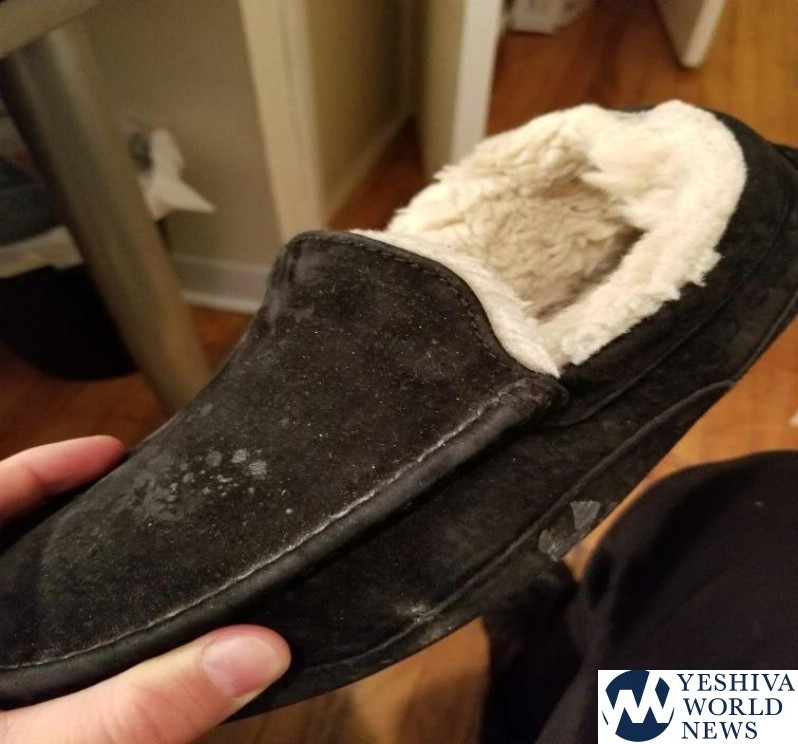 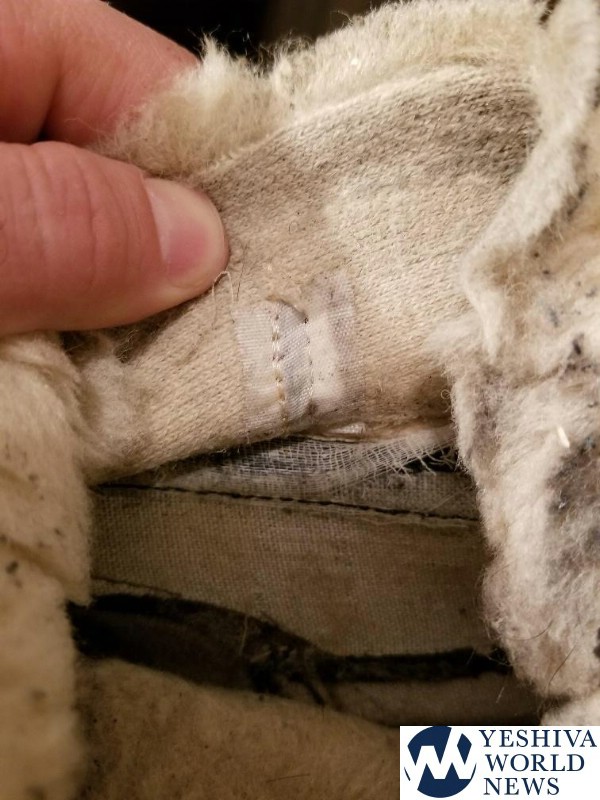 So What is New?

On February 14th, there was a communication sent from one of the customer care representatives to a woman named Chaya. The Customer Care rep, M. Tafoya, stated that all of the Decker Ugg shoes, in fact, contain linen.  It was this communication which set off the firestorm. 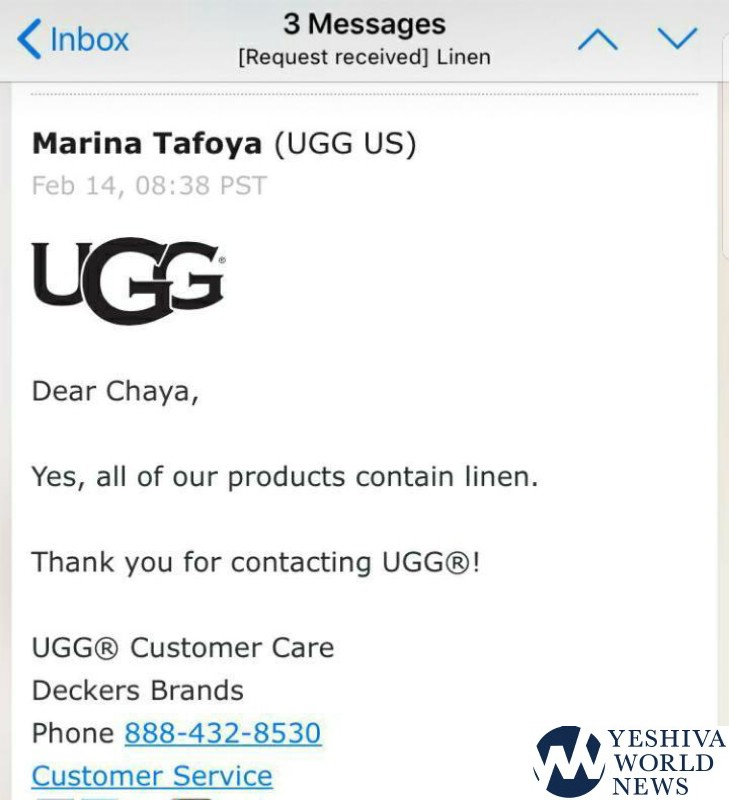 The problem is that many Shatnez laboratories across the country have not been able to locate the linen on all of the brands. Some of the labs have located the linen on the ones that were previously known to have Shatnez. The halachic question now arises as to whether we should be concerned for the statement made by the representative, or do we rely on the Chazakos that we have relied upon for years in regard to shatnez checking?

The Uggs representatives are now telling customers that they are checking with the product teams in order to convey to their consumers accurate and precise information.  They are not categorically stating that all of the shoes contain linen.

This question was posed to a number of Gedolei HaPoskim, and the answers will be included here as soon as they arrive.

At 7:00 PM on Monday evening the following response was heard from Rav Dovid Feinstein Shlita:

Until word is received from more senior people at Uggs (no customer service representatives) as to whether or not all the shoes contain linen, one may rely upon the fact that apart from the seven known models, the Shatnez checkers have not found the linen.  This is not a heter, but rather a method of conduct concerning the wearing of the Uggs until more information comes in.**

We received the following communication from UGGS representative:

I represent UGG – I’m with their communications firm – and I caught your story: https://www.theyeshivaworld.com/news/general/1681530/ugg-controversy-do-uggs-have-shatnez-an-update.html.

I’m providing a response below from the company.

The response from the company indicates that none of the current [email protected] footwear products contain both wool and linen.  They do not discuss the past.  Also, just this evening Shatnez was found in a new pair of UGG moccasins.

Also Rav Dovid Harfenes Shlita ruled that a company, in general, does have ne’emanus if they put it in ksav – in writing.  He later issued a letter saying that he never paskened on Uggs – never having seen them.

Rav Shlomo Miller Shlita also ruled that the Uggs (other than the 7) are permitted and there is no need to be concerned for the note from the Customer Claims Representative.