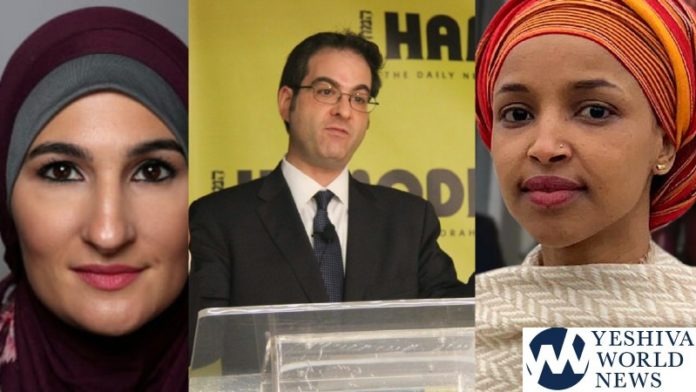 Omar tweeted: “At this year’s AIPAC conference, the topic PM Netanyahu chose to focus on was…me.”

Omar was referring to the part of Israeli Prime Minister Netanyahu’s speech in which he said: “So I have a message to all the antisemites out there – whether they live in modern Persia, in the palaces of Tehran or the bunkers of Beirut; whether they march through the streets of Charlottesville or murder worshippers in a synagogue in Pittsburgh; whether they voice their hatred in political parties in Britain, or Europe, or the United States…

The Jewish people do not bow down. We stand up. We fight. And we win.

My friends, ladies and gentlemen, some people will just never get it. They’ll never understand why the vast majority of Americans – Jews and non-Jews alike – support Israel.

Take it from this Benjamin, it’s not about the Benjamins.”

Councilman Yeger responded “You’re an antisemite and a member of Congress. It’s not strange that you’d be mentioned. Anyway, what are you complaining about? It’s what you want.”

Yeger never negatively referred to the Palestinian people as a people, but simply stated the geographic reality that there is no place as “Palestine”, something that is 100% accurate. The United States government does not recognize a country called “Palestine”.

You're an antisemite and a member of Congress. It's not strange that you'd be mentioned. Anyway, what are you complaining about? It's what you want. https://t.co/e5XTRixub5

This prompted furious responses by Palestinian activists on social media. One of them wrote: “brooklyn council member calls ilhan omar an antisemite. this is the same council member who has repeatedly said that palestine does not exist and refers to them as “so-called palestinians”

Yeger responded by saying “Palestine does not exist. There, I said it again. Also, Congresswoman Omar is an antisemite. Said that too. Thanks for following me.”

Palestine does not exist.
There, I said it again.
Also, Congresswoman Omar is an antisemite. Said that too.
Thanks for following me. https://t.co/apM565HoEV

YWN has learned that following his comments on Twitter, Councilman Yeger received threats against himself and his family.

A sitting NYC Councilman denying the existence of an entire people. If anyone else in his same position said something similar, they would be immediately rebuked. This is disgraceful. Palestinians exist. We are a resilient people and we don’t need bigots like you to recognize us. https://t.co/lFupO3prwd

Brooklyn is home to one of largest Palestinian communities. It’s irresponsible & dangerous to engage in this blatant bigotry. I’m Palestinian, I exist & so does my community. Yeger needs to be removed from the Immigration Committee & apologize publicly to Palestinian New Yorkers. https://t.co/lFupO3prwd

People like Councilman Yeger are upset that Palestinians do in fact exist and that more Americans are taking up the plight of the Palestinian people. Tweets like his actually reaffirm our cause and fuel the movement further. Yeger’s position is the minority and he knows it. ✊🏽🇵🇸

A two-state solution is the best hope for peace. I challenge anyone who thinks the State of Israel shouldn’t exist. But the same goes for anyone who would deny Palestinians a home. https://t.co/3JvnS4UOhm

I condemn this irresponsible and divisive rhetoric unequivocally.

We will only achieve peace if we acknowledge each other’s inherent dignity.

We should all be working towards a peaceful two state solution for Israel and Palestine that respects the dignity of both the Palestinian and Israeli people. pic.twitter.com/0Ypsp9QfFT

To discount & dismiss an entire group of ppl is completely destructive & not something an elected official in the world's most diverse city should spout. Yeger's comments are painful to individuals & the cause of a two state solution & peace. I urge him to immediately apologize. https://t.co/UHn5038Hwb

.@lsarsour chants “from the river to the sea Palestine will be free” – erasing Israel from the map, and she’s calling for @KalmanYeger to resign bc he stated the historically factual truth?

NO! He won’t resign! And NO, he is not wrong just because SarSOUR wants him to be! https://t.co/S4gIIYcrJh

Anyone who lectures us
on dangerous bigotry while promoting @Ilhan & Farrakhan's indefensible antisemitism is a hypocrite. Sarsour has exploited her platform to divide instead of unite. The pursuit of mutual respect should always be our goal but we demand equal standards for all. https://t.co/7OEdLU1HAO

Also, I never said anything about the people. I'm simply referring to the geographic reality that there is not presently a place with that name. Folks read what they want to.

If the media wants to go after @KalmanYeger for this, they'll need to go after hundreds of thousands of his fellow new Yorkers who believe the same. Enough is enough we don't have to blindly follow the new progressive dogma.