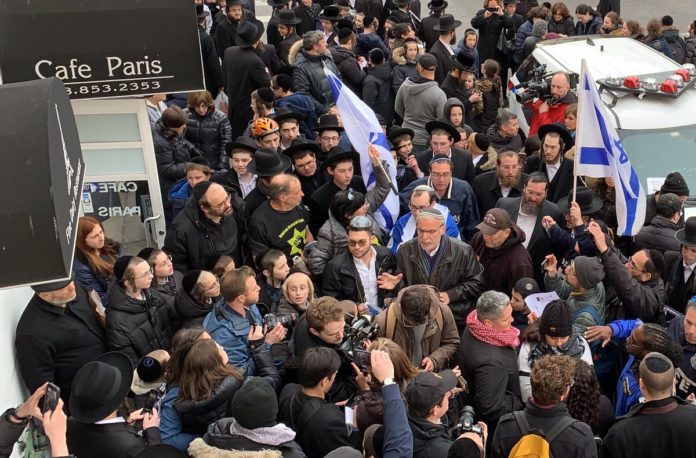 With the uproar over New York City Councilman Kalman Yeger’s comments about “Palestine”, well-known anti-Semite Linda Sarsour organized a protest at his offices in Boro Park on Thursday evening. The turnout was very small and protesters considered the event a disappointment.

Meanwhile, Dov Hikind called on the community to come out and support Yeger and denounce Sarsour. Several hundred people gathered on the corner of 16th Ave and 44th Street, though many were just there to observe the event.

Hikind urged the gathering because we can not “allow a troupe of anti-Semites to run over our neighborhood and succeed in pronouncing their hatred unchallenged.”

Approximately one dozen members of Neturei Karta showed up to support Sarsour and the 15 pro-Palestinian protesters that showed up. At least one of the Neturei Karta members was in Iran to attend the notorious Holocaust denial conference a few years ago, as well as other visits where he hugged and kissed former Iranian President Ahmadinejad.

Yeger was not at his office during the protest.

The backlash to Yeger’s comment that “Palestine does not exist” continued Thursday, with chairman of the NYC Council’s immigration committee Carlos Menchaca saying, “I do see a future without him in this immigration committee,” and Council Speaker Corey Johnson said he was “uncomfortable” with having “someone that holds those viewpoints on a committee that’s supposed to welcome all immigrants.”

In response to the criticism, Yeger said, “My point was never about people. My point was about a location. A geographic reality and an international legal reality, a fact. There is no state by that name. There is no place by that name. That’s a fact. I didn’t make it up, I didn’t invent it, that’s official U.S. policy, that’s the policy of many, many nations around the world.”

VIDEOS AND PHOTOS BY HESHY RUBENSTEIN

Just spoke to @KalmanYeger and learned of death threats that have been made against him! We are thankful to our local NYPD for his protection.

Rest assured: WE WILL BE THERE to counter @lsarsour to stand up against her antisemitism and support of terrorists. pic.twitter.com/1iKlJBU9BJ

Neturei Karta was shouted down by the crowd:

Eventually, the NYPD escorted Neturei Karta into a police van and drove them away:

“[Yeger’s] fellow councilmen have the audacity to call for his removal from the city’s Immigration Committee all the while they remain silent as Congresswoman Ilhan Omar spews her antisemitic vitriol week after week,” said former New York State Assemblyman and chairman of the Coalition for a Positive America Dov Hikind.

“Not only will we fight for our councilman and his right to state historical facts without being bullied by a hateful contingency ready to pounce on anything they can twist into a misstep, but we will continue to pursue haters like Omar because they’re the ones who have to go.”

Hikind urges all those who are able to come, to attend the counter-protest so that we do not allow a troupe of antisemites to run over our neighborhood and succeed in pronouncing their hatred unchallenged.

“We must show up in force to defend our local councilman Kalman Yeger who’s being unfairly targeted by an anti-Semite and well-known terrorist supporter”, said Hikind.

Unfortunately, there were some ugly moments as well. In the following video, failed candidate for City Council Heshy Tischler can be heard asking a Muslim woman who attended the protest with her young child if her “daughter doesn’t have any bombs on her, does she?”

As if that weren’t bad enough, Tischler videoed himself and proudly shard the clip to social media.

Many took to social media to condemn Tischler for his disgusting and hurtful comments, and called on him to apologize.

“Thankfully, this man never got close to representing the community as a councilman, nor will he ever get close”, a man named Sholom Berger told YWN.

It doesn’t matter where hate or bigotry comes from, we must condemn it in all forms (but actually do so, not just say we will) if our condemnations are to mean anything at all. pic.twitter.com/zFqv29OKyr

I couldn’t be more proud of our community and the Jewish people at large for demonstrating their unequivocal and resounding support for a fellow Jew when under attack by a hoard of antisemites. pic.twitter.com/E6Dnaplenn

. @NYDNPolitics “Pro-Palestinian protesters dominated the crowd outside Yeger’s office at the corner of 16th Ave. and 45th St. in Borough Park.”

See if you can spot the problem. pic.twitter.com/f5PbvBgbkb 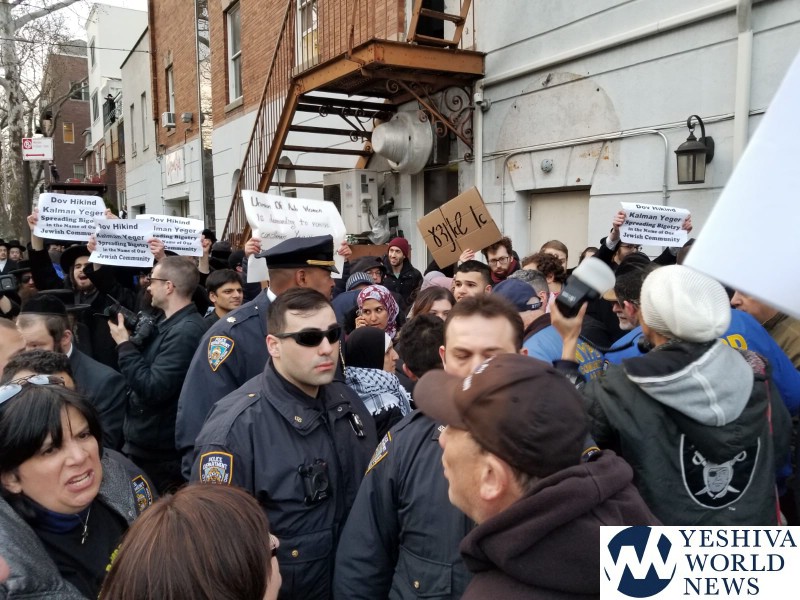 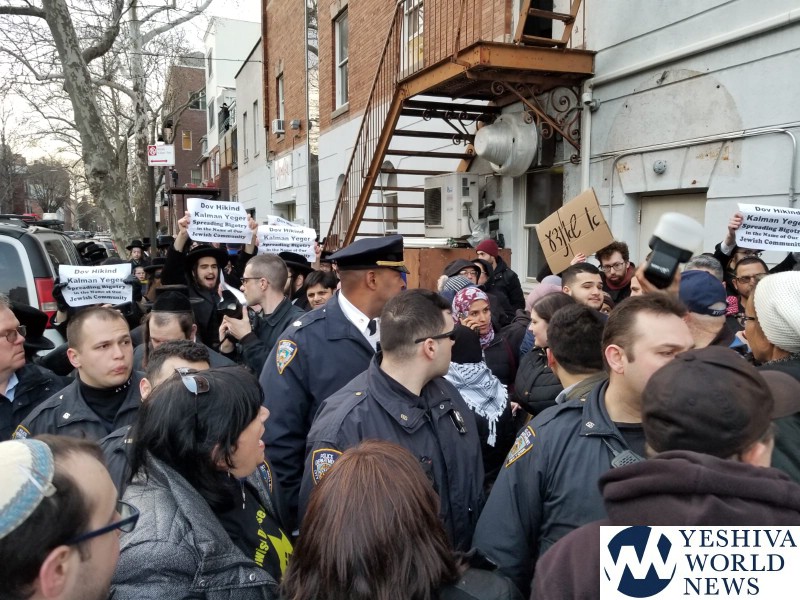 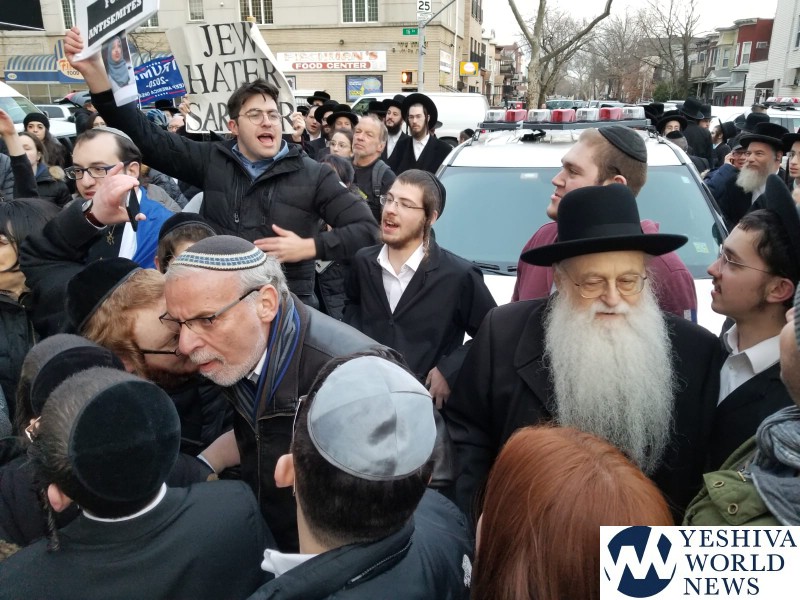 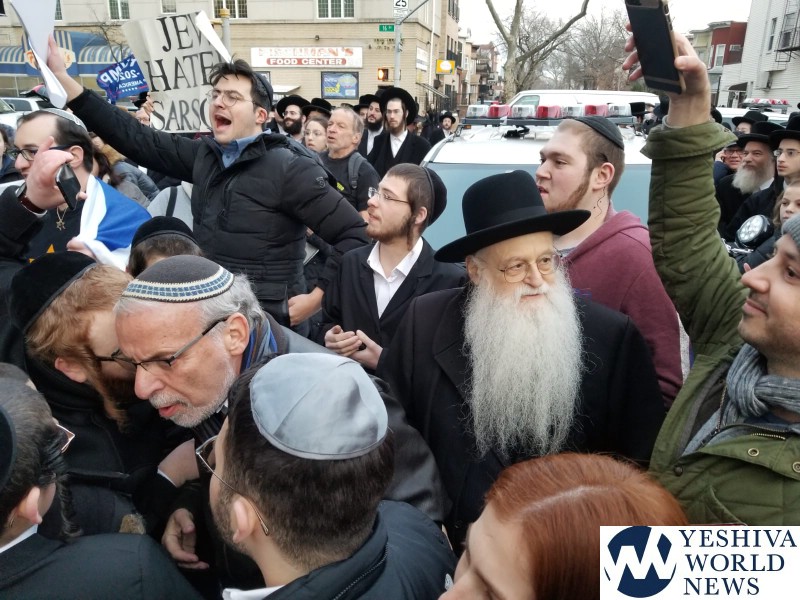 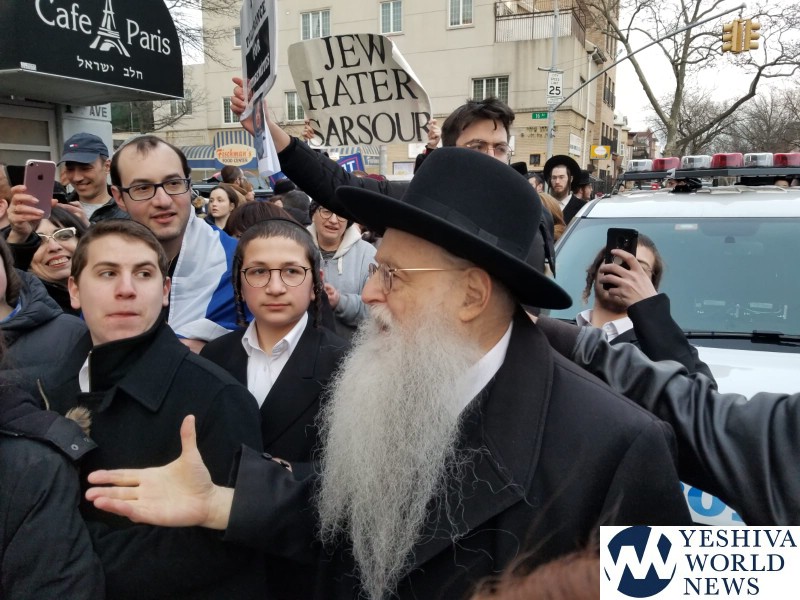 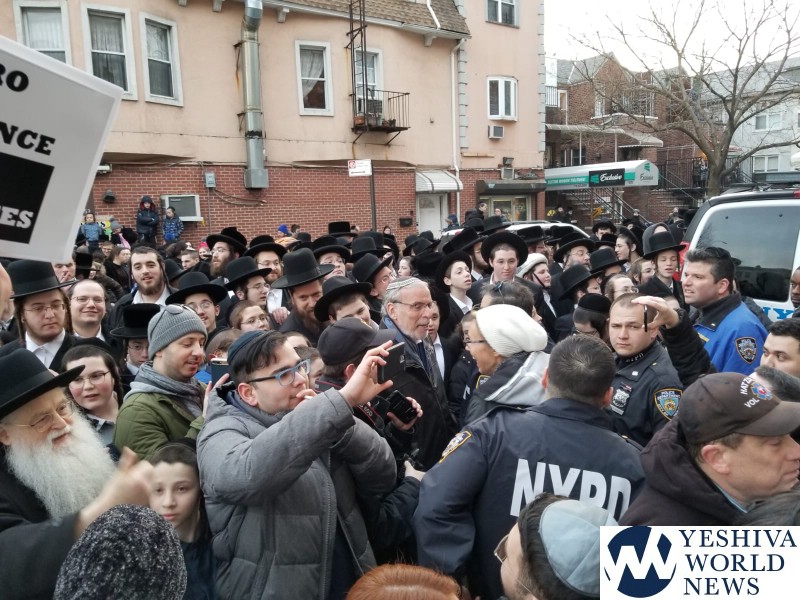 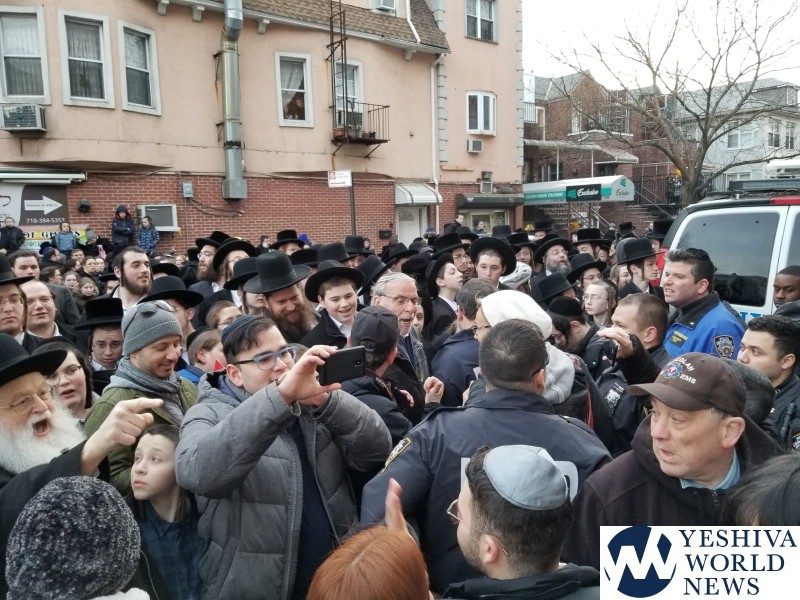 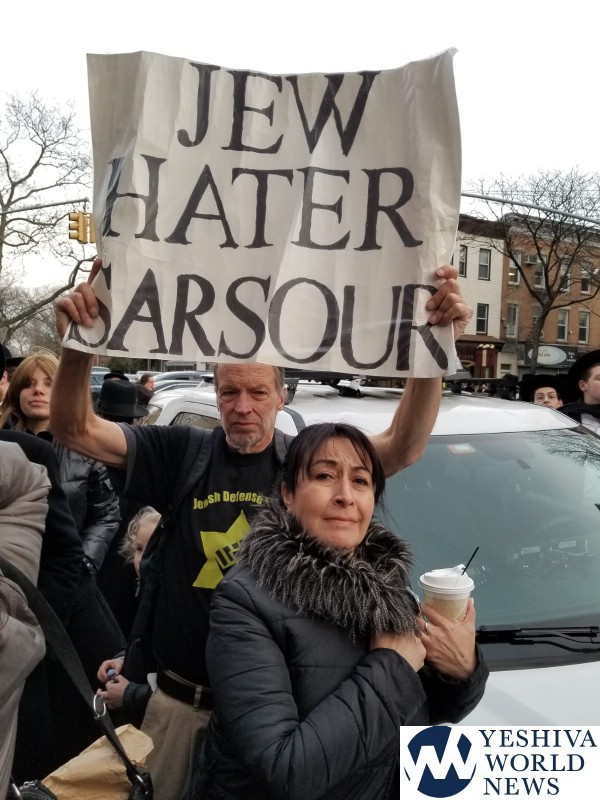 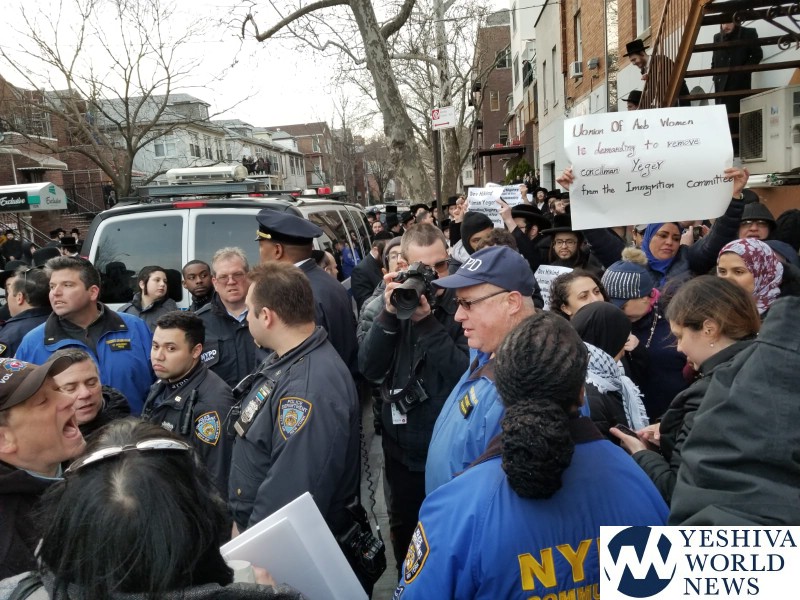 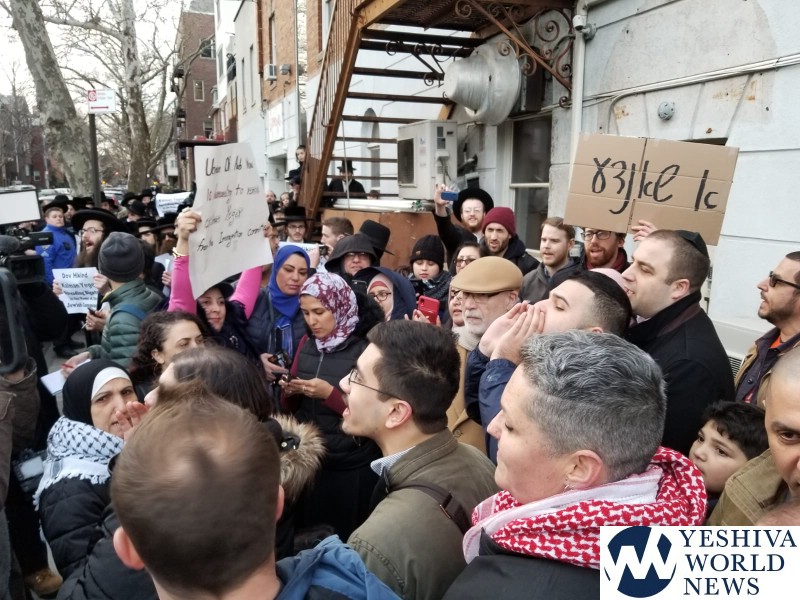 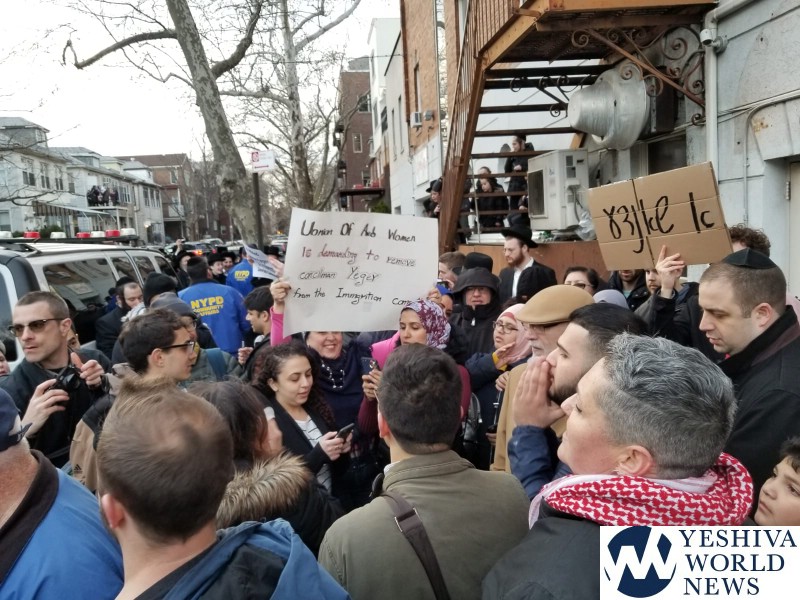 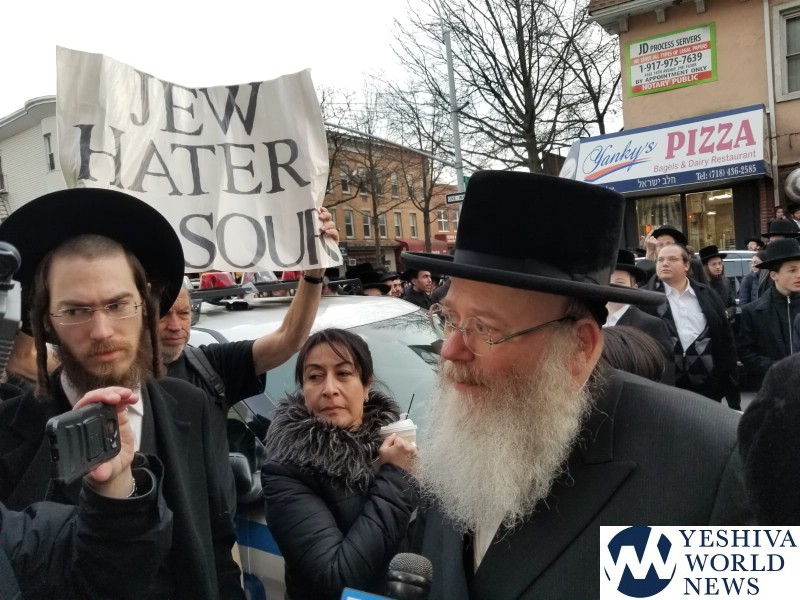 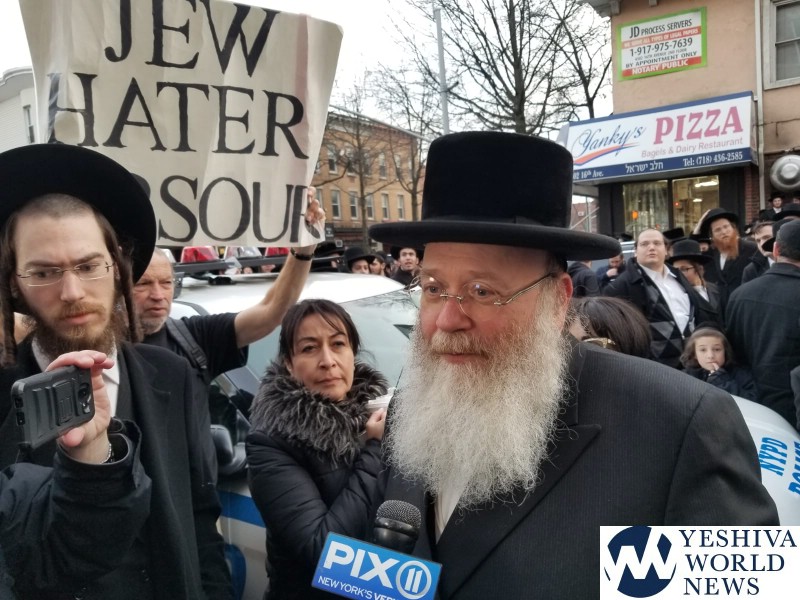 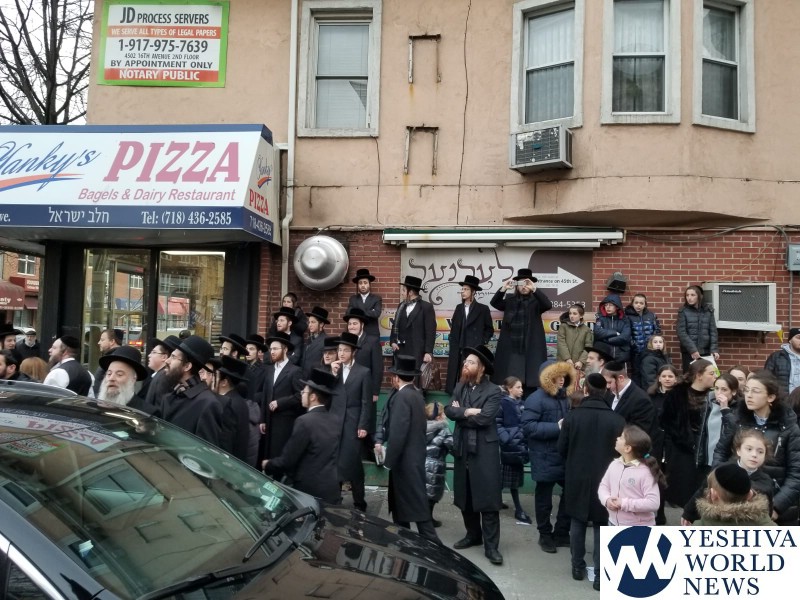 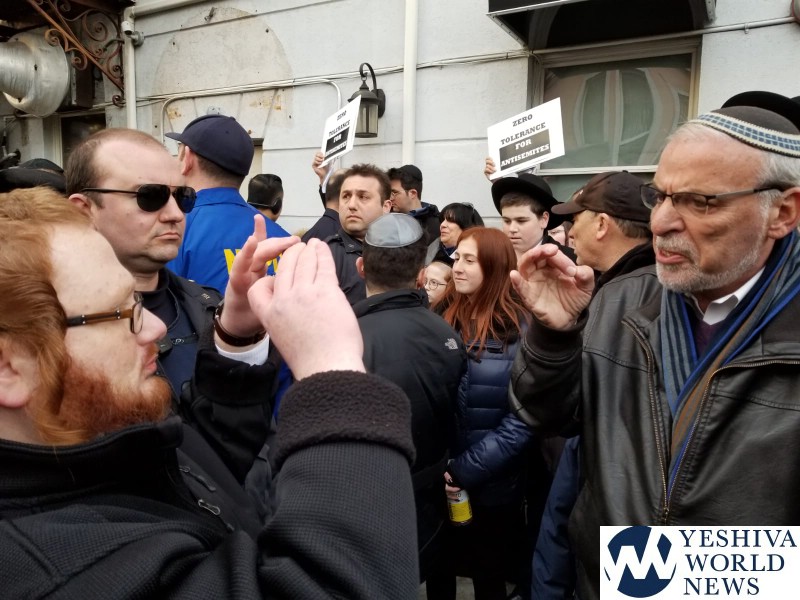 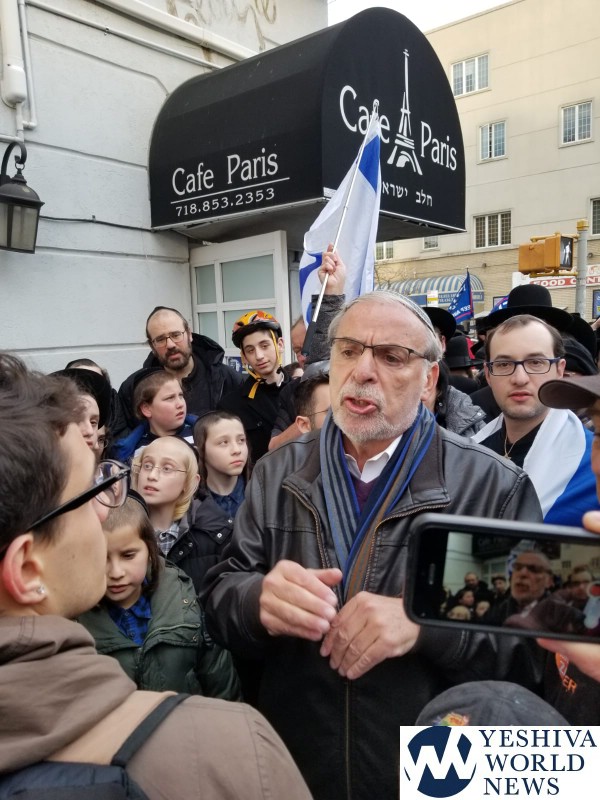 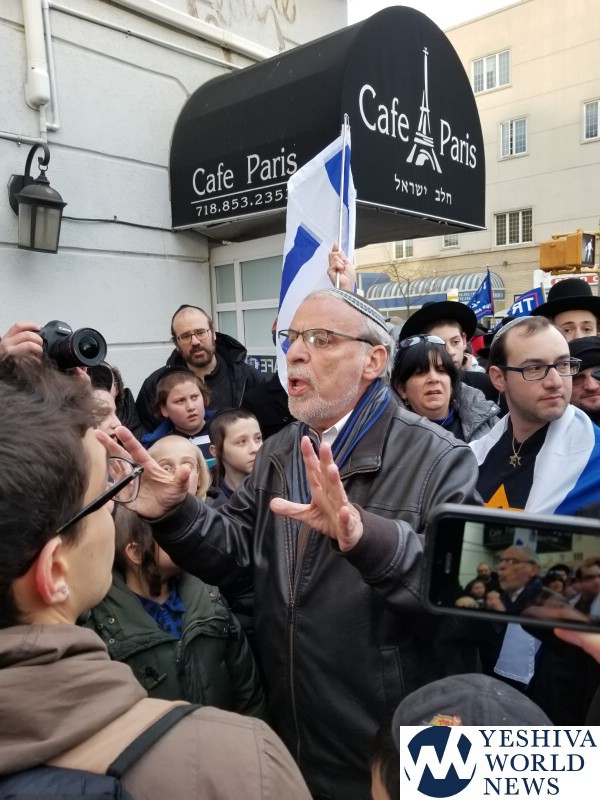 Thank you to the @NYPD66Pct for doing an amazing job at protecting both sides of today’s protest and keeping the peace. We’re lucky to have such dedicated law enforcement officials protecting us every day. pic.twitter.com/HJwMrpFVGp

Proud of our community for showing up in full force for our elected official.

We will not tolerate antisemitism on our turf. pic.twitter.com/ISF2b7KFf3

.@lsarsour chants “from the river to the sea Palestine will be free” – erasing Israel from the map, and she’s calling for @KalmanYeger to resign bc he stated the historically factual truth?

NO! He won’t resign! And NO, he is not wrong just because SarSOUR wants him to be! https://t.co/S4gIIYcrJh

Palestine does not exist.
There, I said it again.
Also, Congresswoman Omar is an antisemite. Said that too.
Thanks for following me. https://t.co/apM565HoEV

A sitting NYC Councilman denying the existence of an entire people. If anyone else in his same position said something similar, they would be immediately rebuked. This is disgraceful. Palestinians exist. We are a resilient people and we don’t need bigots like you to recognize us. https://t.co/lFupO3prwd

Brooklyn is home to one of largest Palestinian communities. It’s irresponsible & dangerous to engage in this blatant bigotry. I’m Palestinian, I exist & so does my community. Yeger needs to be removed from the Immigration Committee & apologize publicly to Palestinian New Yorkers. https://t.co/lFupO3prwd

People like Councilman Yeger are upset that Palestinians do in fact exist and that more Americans are taking up the plight of the Palestinian people. Tweets like his actually reaffirm our cause and fuel the movement further. Yeger’s position is the minority and he knows it. ✊🏽🇵🇸

Also, I never said anything about the people. I'm simply referring to the geographic reality that there is not presently a place with that name. Folks read what they want to.

If the media wants to go after @KalmanYeger for this, they'll need to go after hundreds of thousands of his fellow new Yorkers who believe the same. Enough is enough we don't have to blindly follow the new progressive dogma.

A two-state solution is the best hope for peace. I challenge anyone who thinks the State of Israel shouldn’t exist. But the same goes for anyone who would deny Palestinians a home. https://t.co/3JvnS4UOhm

I condemn this irresponsible and divisive rhetoric unequivocally.

We will only achieve peace if we acknowledge each other’s inherent dignity.

We should all be working towards a peaceful two state solution for Israel and Palestine that respects the dignity of both the Palestinian and Israeli people. pic.twitter.com/0Ypsp9QfFT

To discount & dismiss an entire group of ppl is completely destructive & not something an elected official in the world's most diverse city should spout. Yeger's comments are painful to individuals & the cause of a two state solution & peace. I urge him to immediately apologize. https://t.co/UHn5038Hwb