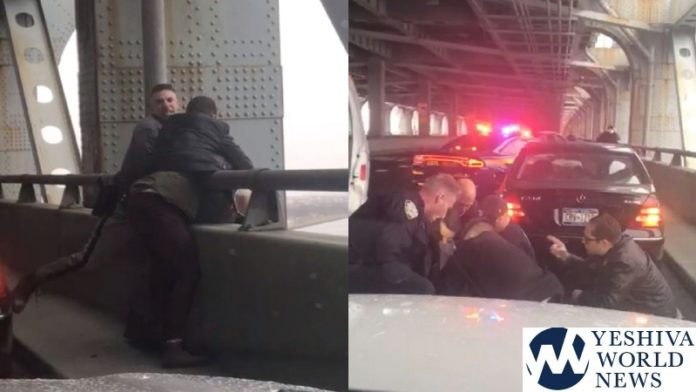 The attached footage is heart-stopping.

Tuli Abraham was driving on the Verrazano Bridge on Sunday afternoon, when he noticed a car in front of him suddenly stop. A man exited his vehicle, and walked to the ledge of the bridge. Not wasting a second, Tuli stopped his car and ran to the man, asking him what he was doing.

“I am going to jump”, the man replied, as he began climbing over the ledge.

Tuli grabbed him to prevent him from jumping. Around a minute later, he was joined by a NY State Trooper.

The NYPD eventually assisted them as well as other Good Samaritans.

The New York State Police identified its officer as Trooper Joshua Kaye, SP Staten Island.  He was taken to Staten Island University Hospital to be treated for pain in his ribs and back.  The unidentified jumper was taken to NYU-Langone Hospital in Brooklyn to be evaluated.

Tuli is the son of Williamsburg community activist Isaac Abraham, and is the owner of “Heavenly Events”.