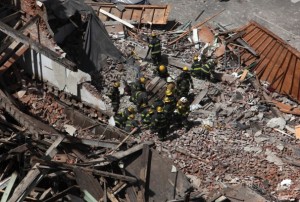 A building that was being torn down collapsed with a thunderous boom Wednesday, raining bricks on a neighboring thrift store, killing six people and injuring at least 13 others in an accident that witnesses said was bound to happen.

Early reports from Mayor Michael Nutter had been that one woman had died in the Wednesday morning accident, but rescuers using buckets and their bare hands to move bricks and rubble kept working through the evening. Body bags were removed from the collapse site at night, and Nutter said at a news conference that authorities didn’t know how many people had been in the thrift shop or on the sidewalk.

Nutter said the city’s emergency workers had been “diligent, determined, focused” in their rescue efforts.

“If anyone else is in that building, they will find them,” he said.

One woman was pulled from the rubble of the Salvation Army thrift store two hours after the 10:45 a.m. collapse when rescuers heard her voice, city fire Commissioner Lloyd Ayers said. Rescuers had been prepared to dig through the rubble all night because they didn’t know how many people were in the thrift store when the building collapsed on it.

Survivors were taken to hospitals with mostly minor injuries, and some had been treated and released by evening.

Officials from the Department of Labor and Occupational Safety and Health Administration were at the scene.

The collapse involved an empty building that once housed a first-floor sandwich shop and apartments above. The thrift shop was on one side. The other side was an adult bookstore and theater that had been taken down within the last few months.

Several witnesses said they had been casting a wary eye on the demolition site and questioned how the workers were tackling the job. That raised questions about how closely the highly visible spot on Market Street, one of Philadelphia’s signature boulevards, was being monitored.

Roofer Patrick Glynn said he had been watching workers take down the doomed building over the past few weeks, and he said he suspected a collapse was inevitable because of the methods the workers were using.

“For weeks they’ve been standing on the edge, knocking bricks off,” he said. “You could just see it was ready to go at any time. I knew it was going to happen.”

Glynn and Anthony Soli were working on a roof atop a nearby building when they heard what sounded like two loud bangs or explosions. They immediately ran down the scaffolding and helped pull out two women and a man.

Steve Cramer, who has been working as a window washer across the street for several days, said the demolition crew left 30 feet of a dividing wall up with no braces and it compromised the integrity of the building

There were no existing violations on the building and the demolition company had proper permits for the work they were doing, according to Carlton Williams, of the city’s Department of Licenses and Inspections.

The city issued a demolition permit for the four-story structure on Feb. 1. City officials said the property owner was STB Investments Corp.; messages left at the company’s New York offices and a local agent’s number after business hours Wednesday were not immediately returned. Officials said the contractor was Griffin Campbell Construction in Philadelphia; a message left at a number provided for the firm was not immediately returned.

A demolition expert wondered what precautions were taken to protect the Salvation Army store, especially since it remained open. Stephen Estrin, a Florida contractor who has testified as an expert at several trials involving building collapses, also questioned whether the demolition was being done by hand or with machinery. A piece of equipment with a claw device was seen amid the debris Wednesday.

“This is an inner-city demolition of a masonry building, which would normally be done manually because of the inherent risk — predictable if certain things are not done very slowly and very carefully — of a collapse,” Estrin said. “One of the problems with claw work is it sets up a vibration in the walls.”

Witnesses said they heard a loud rumbling sound immediately before the collapse. More than 100 rescuers and several police dogs searched through the rubble.

“I was standing there looking out my window, watching the men at work on the building, and the next thing I know I heard something go kaboom,” said Veronica Haynes, who was on the fifth floor of an apartment building across the street. “Then you saw the whole side of the wall fall down … onto the other building.”

Bernie DiTomo was driving past the Salvation Army store in his pickup truck, on his way to an appointment, when the collapse happened.

“The next thing you know, I heard a rumble, and a building and a sign fell on my truck,” he said.

He said he lay down in the seat of his cab. It was probably over in about 30 seconds, he said. There was a lot of dirt and dust, but he was able to open the door and get out, unhurt. His truck remained nearby, partially covered in debris, as he watched recovery efforts from across the street.

“It was hard to breathe,” he said.

The accident happened on the western edge of downtown, between the city’s business district and its main train terminal, 30th Street Station. The block had long been a seedy link between gleaming skyscrapers and the busy area around the station.

Maj. John Cranford, of The Salvation Army in Philadelphia, said officials were coordinating with the police and fire department and sent their own disaster response team to the site to serve survivors and first responders.

“Our No. 1 concern is for the safety of our customers and the employees who were involved,” he said. “We ask for the public to pray for those involved.”

Records show the collapsed building was sold in 1994 for $385,894. Marinakos, the architect, said plans tentatively called for the block to be redeveloped into retail stores and apartments.