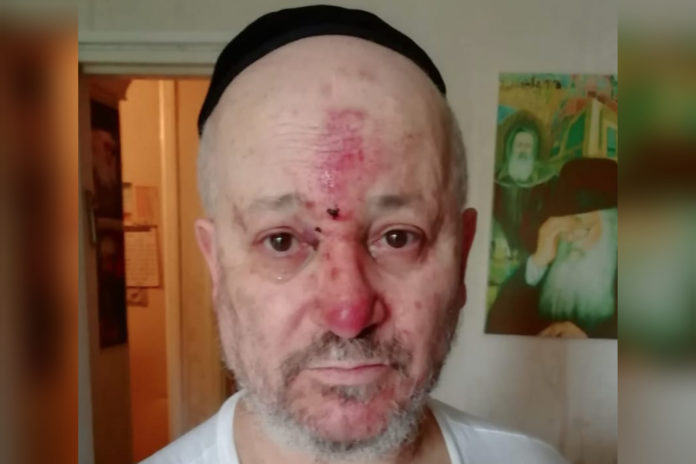 Police in Seine-Saint-Denis – a suburb of Paris, France – are investigating a violent robbery and attack last Monday of a Jewish family. The four attackers were Muslim, and the victim says they targeted his home because he was Jewish.

The incident began around 10:15PM, when a man entered a building and rang the doorbell of a home with a Mezuzah. Shalom Hazan and his wife were waiting for Shalom’s brother to arrive, and opened the door without checking who it was. Four people suddenly appeared, and forced their way inside the Hazan home.

The Muslim attackers were unarmed, and their faces were covered. They ordered Shalom to hand them money and valuables. The victim resisted, the bandits assaulted his wife, Joelle, grabbed her by the throat and threatened to kill her husband if she did not do as they say.

Shalom, 63, tried to fight with them while three of them beat him badly. The fourth attacked his wife while yelling “Show us where the money is or we’ll kill your husband, they took everything,” Hazan said.

The Jewish couple was left brutally beaten and robbed in the attack that lasted nearly 30 minutes.

As can be seen in the attached photo, Shalom Hazan suffers from severe facial trauma, cuts and suffered a severe concussion. He reportedly collapsed in the local shul after the attack.

On Tuesday, the Geller Report website published an interview with the couple that was attacked.

Seine-Saint-Denis is increasingly becoming a Muslim region. In the past it was the center of a thriving Jewish communities. Today, the place is almost empty of Jews.

Hazan lives in a small apartment in a low-cost housing project. He has a mezuzah outside his home, the only Mezuzah left hanging in the building.

Shalom told the Geller Report that he managed to get up and go out to the balcony of his first-floor apartment. He tried to get help from his neighbors and shouted at his Muslim neighbor through the balcony and whose door was open, but claims that they closed the door on him. He screamed for police.

Shalom says the mostly Muslim residents of the buildings ignored his pleas. One French woman on an upper floor eventually heard his screams and phoned police.

The Muslim thugs eventually fled with all his jewelry and cash.

“The police came and took statements and left; They did not even call it a hate crime – just like the anti-Semitic atrocities against Ilan Halimi and Sara Halimi, the police are powerless, they are afraid of the thugs”.

YWN reminds our readers who Ilan and Sara Halimi were.

Ilan Halimi was a young French Jew who, on January 20, 2006, at the age of 23, was kidnapped by a gang of Muslim immigrants. After his abduction, Halimi was tortured to death for about three weeks.

On February 13, 2006, Halimi was found near a railroad track in the “disaster” district south of Paris, with burns and knife wounds covering about 80 percent of his body. He was in a state of shock, but on the way to the hospital he died.

Sarah Halimi was murdered two years ago by her Muslim neighbor who stabbed her and threw her body off the balcony on the third floor. Shockingly, a French judge ruled that the murder was not a hate crime, as reported by YWN-Israel.

Shalom Hazan and his wife have been living in their tiny apartment since 1985, when the complex was 90 percent occupied by Jews. and was considered a very safe Jewish neighborhood. Eventually, Muslims began moving into the area, the Jews began to leave, and now the Hazan family is the last Jewish family there. They now fear for their lives, and are planning on moving.

Hazan says he wears a baseball cap on top of his Yarmulka when walking in the street out of fear.