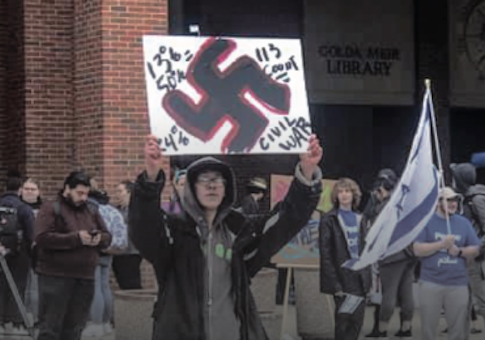 The following is via Washington Free Beacon:

Outrage is mounting in the Jewish and pro-Israel communities at the University of Wisconsin-Milwaukee after a student at the school protested an event celebrating Israeli Independence Day with signs displaying swastikas and calls for Jewish students to be gassed, speech the university says is protected and cannot be stopped.

Kristian Gresham, reported to be “a 26-year-old man with a documented history of aggressive, racist, and criminal behavior, demonstrated last week before a group of Jewish and pro-Israel students while holding signs that featured swastikas and a call to gas Jewish students,” according to an online petition condemning the display.

University Chancellor Mark Mone has already disseminated at least two formal letters on the incident, which has sparked calls for the school to expel Gresham. Mone, in his statements, condemns the hateful rhetoric but insists that the university has a responsibility to support free speech.

“Many of you have expressed concern that my last campus message—which came in response to a student carrying a sign with a swastika on it during an Israeli Independence Day event on our Milwaukee campus last Monday—inadequately addressed the significant harm that it caused,” Mone wrote in May 14 communication. “Please know I have heard you and acknowledge my message did not fully capture or reflect how deeply saddened, frustrated and angry I am personally, as a member of this community, that anyone would inflict such pain and fear on our Panther family. I am sorry.”

This followed a May 7 message from Mone defending Gersham’s right to free speech, an argument that roiled tensions on campus and prompted the school to later recalibrate its response.

“Under the First Amendment, displaying offensive symbols, such as a swastika, to a general audience in a public space is protected akin to speech,” Mone wrote in the May 7 communication. “Nevertheless, please know that we emphatically renounce such hateful symbols and do not support or condone any viewpoint that is hurtful, harmful or disparaging.”

“We are a large, urban public university that will always be a forum for the free exchange of ideas—even when those ideas are hateful or repugnant and challenge our thinking in dreadfully unsettling ways,” Mone wrote.

“I’m the wrong color to be a Nazi.”
A @UWM student is holding a swastika sign in front of an Israeli Independence Day celebration. He says he’s using the hate symbol to get attention. #uwm pic.twitter.com/msHXLg7CVc