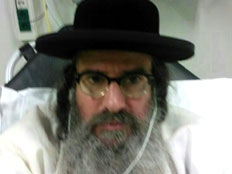 Rabbi Yosef Antebi, 50, was assaulted in an apparent hate attack in Amsterdam, Channel 2 News reported. The rav, who is affiliated with Neturei Karta, was attacked by a man “who looked Muslim” a friend of the rav reports. The assault took place on Sunday, 15 Tammuz 5773.

The rabbi was walking on a street when a vehicle stopped at his side and “a Muslim appearing man” got out and after shouting his anti-Semitic slurs he spat at him and then he began punching and beating the rabbi. The report adds the rabbi asked a passerby to assist him but his plea was ignored. At one point the rabbi began coughing up blood.

The rabbi was hospitalized for his injuries. While his injuries are not life threatening, he does appear to have sustained fractured ribs and internal bleeding. Foreign Ministry officials in Israel told Channel 2 they are not aware of the incident.

The report states the rabbi had a cellular phone with a camera and it appears he did photograph his attacker, giving those pictures to police.