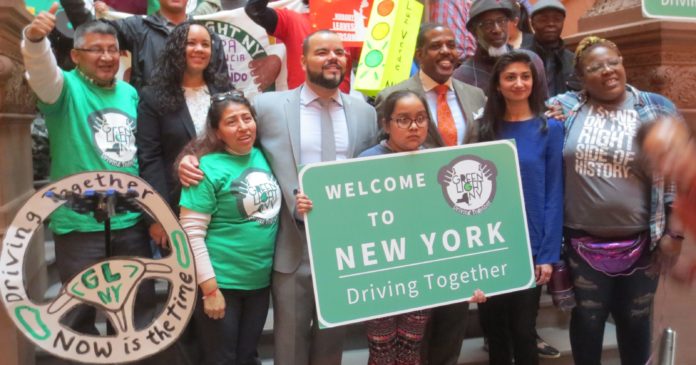 New York state would become the 13th state to permit driver’s licenses for immigrants who entered the country illegally under legislation passed the state Assembly Wednesday.

The measure has the support of liberal groups, the state’s largest business organization and Gov. Andrew Cuomo, a Democrat. Yet its fate remains uncertain in the state Senate, which has not scheduled a vote on the bill.

During floor debate in the Assembly, Democrats argued that immigrant families deserve to have the same ability to drive given to other New Yorkers. Licensing immigrants, they said, would improve road safety and help the businesses that rely on immigrant employees.

“This bill is common sense,” said Assemblyman Marcos Crespo, D-Bronx and sponsor of the legislation. “It is in the best interests of the entire state of New York and it responds to the contributions of our immigrant families.”

Republicans countered that the state has no duty to give licenses to immigrants who broke federal immigration laws. Some also questioned whether immigrants would use the licenses to try to register to vote, or whether terrorists might seek to obtain a state license

The bill is backed by the Business Council of New York State, the state’s largest business organization, as well as several labor unions. Cuomo said Wednesday that he’ll sign if it passes the Senate before lawmakers adjourn next week.

In other legislative news Wednesday:

RENT RULES: Cuomo said he will sign a deal negotiated by legislative leaders that would strengthen rent stabilization rules covering more than a million tenants in and around New York City.

The proposal, which lawmakers plan to pass Friday, would permanently extend the current rules governing rent increases for rent-stabilized units. It would also restrict the ability of landlords to remove units from the system and permit cities throughout the state to opt into rent stabilization rules if they choose.

“This is the best bill they can pass, so I will sign it,” the Democratic governor told reporters Wednesday.

“The tables have finally turned in favor of millions of tenants across New York state,” said Assemblywoman Linda Rosenthal, D-Manhattan. “For far too long, big real estate pulled the strings in Albany.”

Landlords oppose the changes, but their concerns are unlikely to derail the measure.

SEXUAL HARRASSMENT AND RAPE: Mira Sorvino joined Cuomo to push for stronger sexual assault and harassment laws in New York and revealed that she’s a survivor of date rape.

The Oscar-winning actress choked up during a news conference Wednesday at the state Capitol with Gov. Andrew Cuomo.

Sorvino says that she has never spoken publicly before about the assault and that she was “doing it here to try and help.”

She said she wouldn’t go into details and didn’t name the person involved.

Advocates want lawmakers to repeal the state’s statute of limitations for second- and third-degree rape and tweak the state’s harassment law to make it easier for victims to prove harassment claims.

Sorvino was also one of the first women to publicly accuse Harvey Weinstein of sexual harassment.