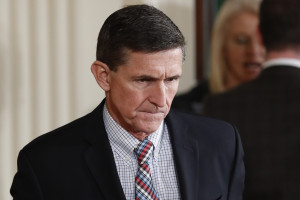 Federal prosecutors say it’s too soon to take a position on sentencing for former Trump administration national security adviser Michael Flynn because he could still be a defense witness in the upcoming trial of a one-time business partner.

The about-face for the trial set to start next week in Virginia could affect Flynn’s punishment in a separate case in Washington, where he pleaded guilty in special counsel Robert Mueller’s Russia investigation to lying to the FBI, and his chances of getting maximum credit for cooperating with investigators.

Flynn had abruptly cut short his own sentencing hearing last December so he could continue cooperating in Kian’s case and get credit toward a reduced sentence.

In a filing Wednesday, prosecutors acknowledged that the change in position raises “numerous issues.” But they said they could not speculate on how it might affect their own sentencing position since they said Flynn could still be called by Kian as a defense witness. They say the sentencing hearing should be scheduled after Kian’s trial ends.

Flynn’s lawyers have objected to the government’s new position, saying it could cause problems for him at his sentencing hearing. One of his lawyers, Jesse Binnall, alleged that prosecutors wanted him to give untruthful testimony.

Kian is charged with illegally acting as a foreign agent. Prosecutors say Kian was acting at the Turkish government’s behest when he persuaded Flynn to write a November 2016 op-ed piece critical of Fethullah Gulen, a cleric living in the U.S. who is a nemesis of Turkish President Recep Tayyip Erdogan.

The legal advice Flynn and Kian received about whether they were required to register as foreign agents — and its admissibility at trial — has been a major issue in pretrial proceedings.