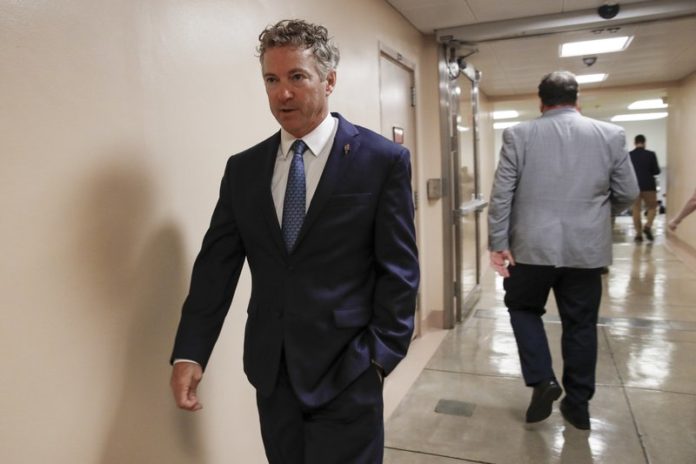 U.S. Sen. Rand Paul is easing back into public activities after his recent lung surgery sidelined him for part of the August congressional break.

The Kentucky Republican is set to deliver a speech Tuesday at a chamber of commerce luncheon in southern Kentucky. It marks his first public appearance since part of his lung was removed at a Tennessee hospital. The senator says the surgery stemmed from injuries suffered when a neighbor tackled him while he was doing yard work at his Kentucky home in late 2017.

Initially, most of Paul’s August travel plans were canceled due to the operation more than a week ago at Vanderbilt University Medical Center in Nashville. But his recovery has progressed faster than expected, allowing him to go to Williamsburg for the chamber event on Tuesday.

“I’m actually doing pretty well,” Paul said in a phone interview with The Associated Press on Monday, his first since the surgery. “And like anybody else who’s used to being active, it’s hard to sit still. I’m ready to get back in the mix of things and to start traveling around the state some.”

His schedule will be scaled back considerably from what had been planned before the surgery, with just a handful of appearances planned in the next two weeks.

He’ll return to Washington in September when Congress reconvenes, and by then “I shouldn’t have any limitations,” Paul said.

The surgery became necessary after he had struggled with what turned out to be a lingering infection in the damaged lung, the senator said.

During his recovery, it wasn’t all well-wishers reacting to his surgery on social media, he said. Paul said he was targeted by some detractors, adding: “We have some real strong hate going on out there.”

A former presidential hopeful, Paul acknowledged that the social media vitriol comes from both ends of the political spectrum, saying: “I think it is important that we all sort of calm our rhetoric down.”

The senator’s attacker, Rene Boucher, pleaded guilty to assaulting a member of Congress and received a 30-day prison sentence. Federal prosecutors have appealed, saying 21 months would have been appropriate. Paul sued Boucher, and a jury in Bowling Green, Kentucky, awarded the senator more than $580,000 in damages and medical expenses. Boucher has since sold his home next door to the senator.

The overheated rhetoric swirling on social media hasn’t affected Paul’s long-term political plans, with the senator saying that “unless something should change, I am planning on running for reelection” in 2022. Paul is now in his second term.

While he was recovering, the nation was rocked by mass shootings in Texas and Ohio.

Paul, a strong gun-rights advocate, signaled his willingness to support something along the lines of “red flag” laws that allow guns to be removed from those who may be a danger to themselves and others.

“I’m not opposed to sort of an emergency order for 48 hours and then you get a hearing in a court where you get the full due-process protections,” he said in the interview. “It’s the one thing that could fix a lot of stuff. I think most of these homicidal attackers … are sending off signals to their family and community.”