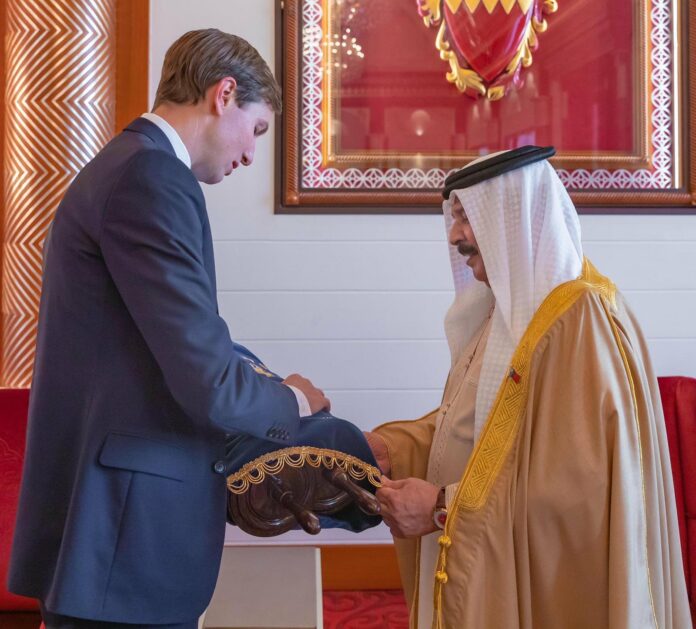 Following the announcement of the normalization deal between Israel and Bahrain on Friday, Walla News and Axios journalist Barak Ravid revealed that Trump adviser Jared Kushner gifted the Bahraini king with a Sefer Torah at a meeting in Manama about the peace agreement with Israel last week.

Kushner ordered the mehudar Sefer Torah from a sofer in the United States prior to his trip to Bahrain, paying for it with his personal funds. U.S. Middle East envoy Avi Berkowitz carried in the Sefer Torah to the meeting and he and Kushner presented it to Bahraini King Hamad bin Isa al-Khalifa, saying it was “written in his honor.”

Kushner added that the Sefer Torah was a gesture of appreciation to the king for hosting the unveiling of the economic part of Trump’s Deal of the Century plan in Manama at the Peace to Prosperity workshop in June 2019.

The moment Jared Kushner gave His Majesty King Hamad bin Isa bin Salman al-Khalifa of the Kingdom of Bahrain a Torah scroll for a Synagogue in Bahrain pic.twitter.com/RvPif5x51I

Bahrain has a tiny Jewish community, consisting of a few dozen members, most arriving generations ago from Iraq, and the Sefer Torah will ostensibly serve the Jewish community. The government maintains friendly relations with the community and a member of the Bahraini royal family visits the community’s Chanukah party every year.