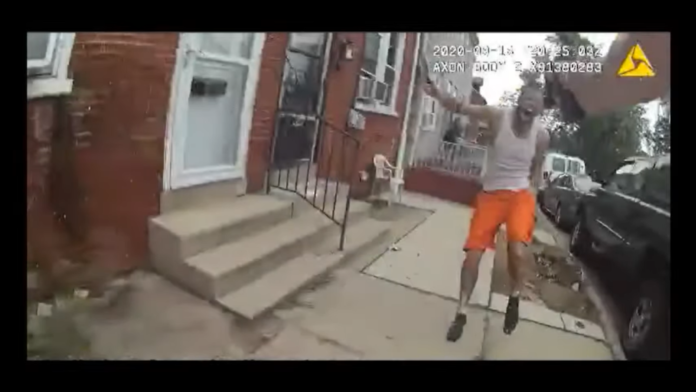 A police officer fatally shot a man with a knife after his sister said she called police to get him involuntarily committed, leading to street protests and vandalism in what the mayor of the small Pennsylvania city of Lancaster called a “heartbreaking day.”

Police posted the officer’s body camera video on social media, showing the man chasing the officer down a sidewalk with a knife before he was fatally shot.

Police eventually used tear gas early Monday to disperse hundreds of protesters who took to the streets of the diverse city of 59,000 people in the heart of Pennsylvania Amish country following the shooting death of Ricardo Munoz on Sunday afternoon.

Munoz, 27, was mentally ill — diagnosed with bipolar disorder and schizophrenia — and hadn’t been taking his medications, his sister told Lancaster Online.

Rulennis Munoz, 33, said she had called a crisis intervention organization and a police non-emergency number to get her brother involuntarily committed.

“He had an episode. He was just incoherent and acting out,” she said. “I called to find out what the procedure was to get him some help.”

Authorities did not immediately explain why an officer was dispatched, although Munoz was facing four counts of aggravated assault after he was accused last year of stabbing four people, including a 16-year-old boy in the face, following a fight.

The body camera video posted by police late Sunday showed the officer fire several shots while running away from Munoz, who then falls to the ground.

Protesters gathered outside the police station and, in video posted to social media, they chanted, “Hands up, don’t shoot,” “No justice, no peace” and “What do we want? Justice! When do we want it? Now!”

It was unclear how motivated protesters were by racism, as they have been in other cities where deaths at the hands of police have stoked protest. Court papers list Munoz’s race as white.

The police department said in a statement that it used “chemical munitions” against protesters after giving several warnings to disperse and that glass bottles, gallon jugs filled with liquid, parts of plastic road barricades and more had been thrown at officers.

Police said buildings and government vehicles were damaged, and the county prosecutor’s office warned Monday that “those who perpetrated acts of violence and destruction will be charged and prosecuted.”

The officer who shot Munoz was placed on administrative leave, the mayor’s office said in a statement, calling it “a heartbreaking day for our city.”

“I grieve for the loss of life and know that there are more questions to be answered as the investigation continues,” Mayor Danene Sorace said in the statement.

The city council president, Ismail Smith-Wade-El, said that more long-term investments must be made in crucial human services, such as mental health care support for adults, housing, crisis intervention and social workers.

Picturesque Amish farms surround the city of Lancaster, which itself is 60% white, according to census estimates from 2019, with much larger populations of Black and Latino residents than the rest of Pennsylvania.

The area also is home to a large Mennonite community that has, for years, resettled refugees from around the world, contributing to the area’s diversity, people there say.