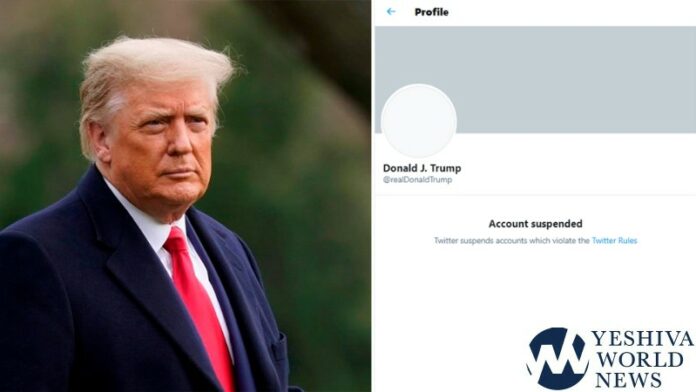 @realDonaldTrump, the Twitter feed that grew from the random musings of a reality TV star into the cudgel of an American president, has died. It was not quite 12 years old.

The provocative handle was given birth by a New York real estate tycoon who used it to help him become the 45th U.S. president. It began with a May 4, 2009, tweet promoting Donald Trump’s upcoming appearance on David Letterman’s show.

It died more than 57,000 tweets later, with Trump using some of his final postings on the powerful platform to commiserate with a pro-Trump mob that besieged the halls of Congress in a deadly assault as lawmakers were set to certify his defeat.

The account met its demise when Twitter announced Friday it was pulling the plug permanently on @realDonaldTrump, citing concern that Trump would use it for “further incitement of violence.” Trump retorted that he’d be “building out our own platform in the near future. We will not be SILENCED!”

Trump, a novice politician but seasoned salesman, realized the power of social media in ways that few other politicians did. And he wielded it with never-before-seen power to diminish his opponents, shape elections and mold reality — at least in the eyes of his supporters.

Early on, @realDonaldTrump seemed innocent enough. Its owner, who had prolific experience in marketing casinos, real estate and even Oreos, used the platform mostly to promote his books, media appearances and give friendly plugs to friends. 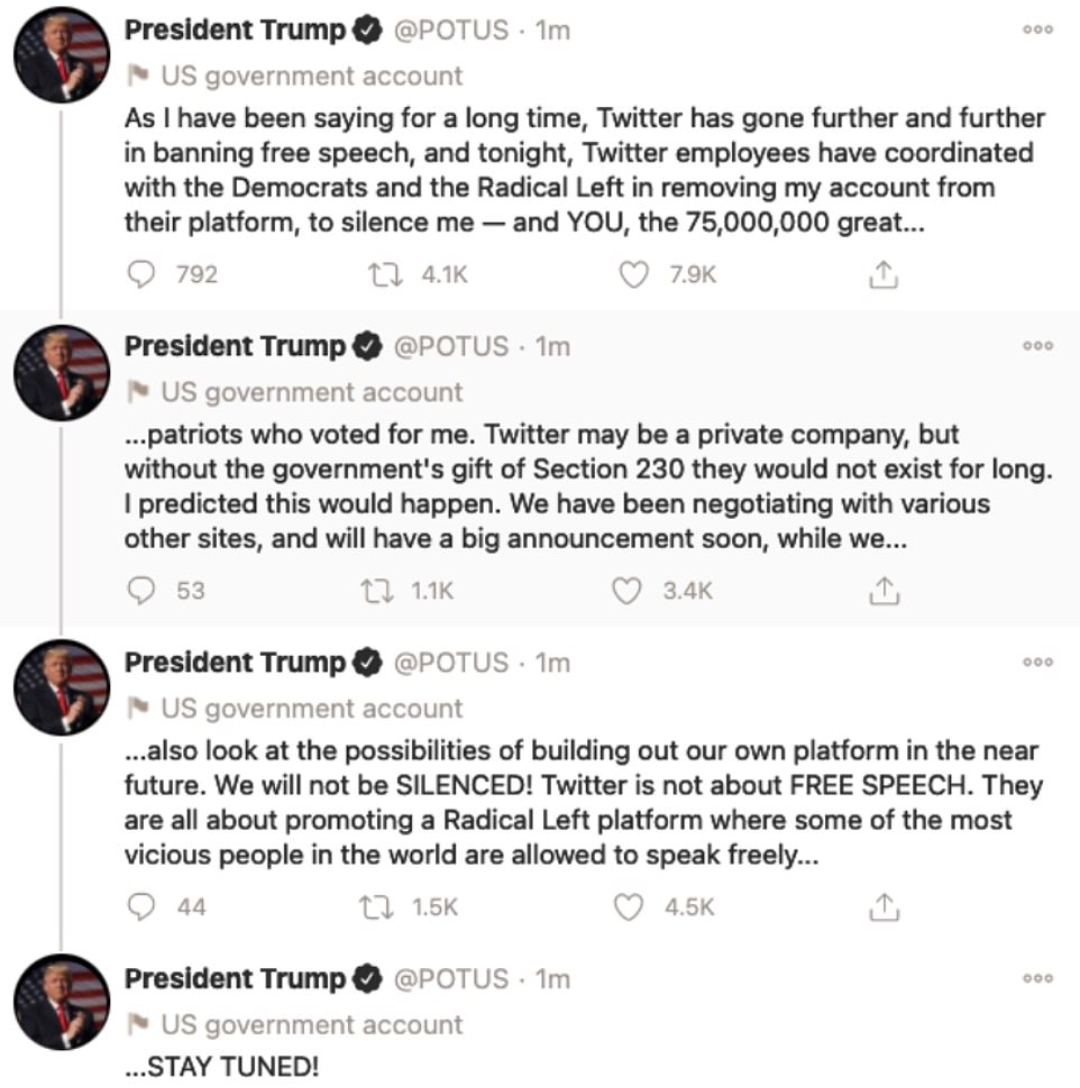 after he was banned from his Twitter account, the president shared three messages from the official @POTUS handle, and Twitter quickly took them down. He sent the same text out in a statement to White House reporters, criticizing Twitter as an opponent of free speech and teasing a potential new conservative social media platform in the future.

But as Trump began seriously toying with a White House run, it became a tool to scorch opponents and give shape to his nationalist, “America First” philosophy.

He deployed its venom equally, whether insulting celebrity enemies (Rosie O’Donnell was “crude, rude, obnoxious and dumb”) or or using xenophobia to malign a country (Britain is “trying hard to disguise their massive Muslim problem”).

Peter Costanzo, then an online marketing director for the publishing company putting out Trump’s book, “Think Like a Champion,” helped bring Trump to the platform.

Twitter was still in its infancy at the time. But Costanzo, who later came to work for The Associated Press, saw the then-140-character-per-message platform as a new tool that the real estate mogul could use to boost sales and reach a broader audience.

Costanzo was given seven minutes to make his pitch to Trump — “Not five minutes, not 10,” he recalled in a 2016 interview.

Trump liked what he heard.

“I said, ‘Let’s call you @realDonaldTrump — you’re the real Donald Trump,’” recalled Costanzo. “He thought about it for a minute and said: ‘I like it. Let’s do it.’”

@realDonaldTrump was prolific: On days when its owner was particularly agitated, such as in the midst of impeachment proceedings, it pushed out more than 100 tweets.

In its most popular tweet, on Oct. 2, 2020, @realDonaldTrump announced that Trump and first lady Melania Trump had contracted the coronavirus. The post got 1.8 million likes and nearly 400,000 retweets, according to Factba.se., which tracks the president’s social media habits and commentary.

The account was used to announce firings. Secretary of State Rex Tillerson learned of his ouster in a tweet.

The account threatened adversaries in the most colorful terms. Before Trump “fell in love” with North Korean dictator Kim Jong Un through secretly exchanged letters, Trump used Twitter to dub him “rocket man” and vowed to respond with “fire and fury” if the authoritarian dared attack the United States.

@realDonaldTrump frequently spread misleading, false and malicious assertions, such as the baseless ideas that protesters at Justice Brett Kavanaugh’s confirmation hearings were paid by the liberal philanthropist George Soros and that November’s election was beset by voter fraud.

Trump often tweeted well past midnight and before dawn, a cathartic outlet for grievances (Witch hunt! Crooked Hillary, Russia, Russia, Russia, FAKE NEWS, and so on.) For the most part, @realDonaldTrump and its 280-character posts effectively allowed Trump to work around the Washington media establishment and amplify the message of allies.

Sometimes @realDonaldTrump stumbled. Trump deleted 1,166 tweets and, in his final months on the platform, had 471 tweets flagged by Twitter for misinformation, according to Factba.se.

In one of his most memorable Twitter stumbles, Trump in May 2017 sent (and later deleted) a cryptic post-midnight tweet that read “Despite the constant negative press covfefe.”

The gibberish set the Twitterverse afire with speculation. Theories included that the tweeter-in-chief had fallen asleep mid-message and that the man who once bragged of having “the best words” was adding a new word to the lexicon to properly describe collusion between Democrats and the press.

The mystery was never solved.

Sam Nunberg, a longtime — and now former — Trump adviser, said that in the summer of 2011, after Trump announced he wasn’t running in 2012 but wanted to remain relevant, his team decided to start using social media to boost his profile.

They chose to focus on Twitter, where he already had an account and several hundred thousand followers. Nunberg remembers sending Trump daily reports on his follower growth. Trump would sometimes hand it back with hand-written notes — “Why not more?” “Why so slow?”

They celebrated when they hit the million mark.

“Twitter definitely played a pivotal role in building Donald Trump as a political figure within Republican politics and he also greatly enjoyed it,” said Nunberg. “Remember he used to say: ‘I wanted to own a newspaper. This is great, it’s like a newspaper without the losses.’”

Trump’s eldest son, Donald Trump Jr., took to Twitter shortly after the platform banned @realDonaldTrump to note that it continues to allow Iran’s supreme leader “and numerous other dictatorial regimes” to use the platform, but cannot abide his father.

In the end, @realDonaldTrump offered an in-the-moment peek into Trump’s state of mind over more than a decade, a period in which the “Apprentice” TV star transformed into the 45th American president.

Down the road, when historians look for a glimpse into Trump thoughts on the issues of his time — anything from actress Kristen Stewart’s treatment of co-star Robert Pattinson to the president’s views on Russian meddling in the 2016 election — the first stop may inevitably be one of the many digital archives that have preserved the tweets of @realDonaldTrump.

With Trump, whatever the topic, there’s always a tweet for that.