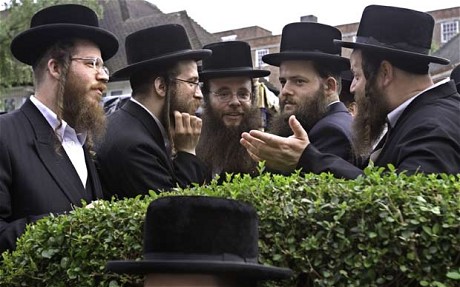 The fast growing Orthodox Jewish community in United Kingdom’s capital has prompted the ‘Liberal Judaism’ group to attack the Haredi community of expanding its households over letting it go.

“The ultra-Orthodox ‘pickle Judaism’ rather than preserve the religion by ‘refusing to engage with the outside world’,” Liberal Judaism Chief Executive Rabbi Danny Rich claimed, according to The UK Jewish News Online.

The natural increase of the Anglo-Jewry, according to the latest Board of Deputies’ annual communal statistics report, is largely attributable to the number of births within the Hared community to the extent that they now comprise at least four out of every ten Jewish births.

In Stamford Hill (North London) and Manchester alone, the number of boys born to strictly Orthodox Jewish families was at least 546 in 2007, rising to 683 in 2012. This would infer a total of over 1,000 births (male and female) in 2007, rising to over 1,300 in 2012.”This represents an average annual increase of 4.6% over this period, a rate which is broadly consistent with other indicators of the growth of the strictly Orthodox population,” the report states.

But the anger of the Liberal Jews is over the fact that over the last 30 years, the proportion of marriages taking place under the auspices of the United Synagogue and other central Orthodox movements declined from 60 percent to just under a half while those in the ‘strictly Orthodox sector’ have soared from less than one in 10 to more than three of every 10.

Reacting to the figures, Liberal Judaism CEO Rich said, “The Charedim (ultra-Orthodox) don’t preserve Judaism, they pickle it. Refusing to engage with the outside world constitutes a failure to engage with Judaism’s key prophetic mission – the commitment to social justice.”

“Jews have a clear choice: do we retreat from the modern world to safeguard the purity of our ‘ancient bloodlines’, or do we share our message of justice as proud members of a multi-cultural society?” Rich asked. Adding, “I think marriage is a very reductive way of defining Jewishness. A Jewish marriage doesn’t secure a Jewish life and a Jewish life does not depend on a Jewish marriage.”

But Rabbi Avraham Pinter, a leading figure in the Stamford Hill community and a former Labour Councillor, was not at all amused at the figures or deterred by Rabbi Rich’s attacks. “For the head of the Liberals to suggest that Pickle facts-page-001 (1)marriage is not important to Judaism is rather rich,” Said Rabbi Pinter. “They have only had 140 marriages in the last five years while there were 1,300 Charedi marriages.”