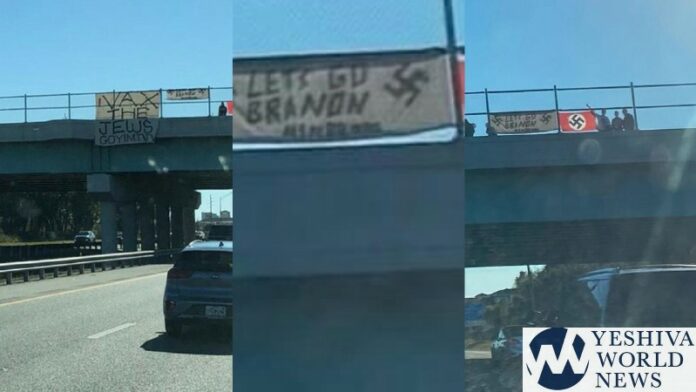 With thousands of Jews in Florida for midwinter break, many were stunned to see a group of individuals in Orlando wearing Nazi-affiliated attire, carrying flags emblazoned with swastikas, and performing Nazi salutes.

The Neo-Nazis were seen in more than one location over the past 24 hours. One location was an overpass on Interstate 4 in Orlando between exit 68 and 69. Thousands of Jews were passing underneath this overpass and subject to the hate.

Some in the group held signs says “Vax the Jews” and harassed passing cars, hurling antisemitic slurs and epithets. One sign read “Let’s Go Brandon”, a comment used by supporters of Former President Trump to take a swipe at President Biden.

According to multiple reports, a number of police officers were at the scene but did nothing – allowing the hate to run amok in Governor Ron DeSantis’ Florida.

Where are the police in #orlando, near Daryl Carter Pkwy, over interstate 4 when there are a dozen people with shirts and flags covered in swastikas. I get freedom of speech, but that's government property. Something being legal doesn't make it right. 😡😮‍💨

A Twitter user said he saw 11 police cars and 2 choppers there, but they allowed the hate to continue, under the pretense of First Amendment rights.

Eventually, the group of about 15 wannabe Nazis were confronted by a larger group from the community and quietly slunk away.

Will DeSantis have a comment to make? He’s said nothing yet.

Pic of Nazi giving all the cops a thumbs up pic.twitter.com/gEDsjP0mLA

My son just witnessed nazis in Orlando. He said there were dozens hanging on the corner. The guy getting assaulted got out of his car and pushed one of them. @fox35orlando pic.twitter.com/HUvNgI3zwl

Right now: shocking display of Nazi flags and demonstrators on multiple overpasses between downtown Orlando and Disney on I-4. pic.twitter.com/6am1Q8ncxS

I’m driving i4 in Orlando and besides for the Nazi flag there’s a sign that says “vax the Jews”. #sosad #Antisemitism pic.twitter.com/3zCD4b8hMh